Verstappen ahead of Leclerc in 2nd practice at Russian GP 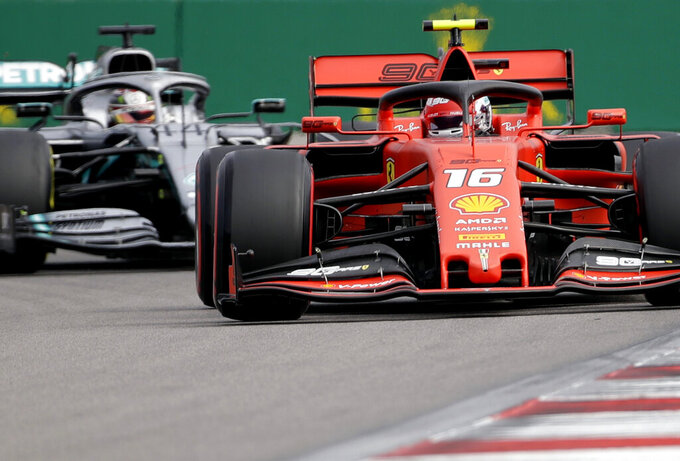 Ferrari driver Charles Leclerc of Monaco steers his car followed by Mercedes driver Lewis Hamilton of Britain during the first free practice at the 'Sochi Autodrom' Formula One circuit, in Sochi, Russia, Friday, Sept. 27, 2019. The Formula one race will be held on Sunday. (AP Photo/Luca Bruno)

After Leclerc set the pace in the opening running at the Sochi Autodrome, Verstappen moved to the top of the time charts.

Lewis Hamilton, who is bidding for his first win since the summer break, was fourth, 0.798 behind Verstappen.

Hamilton's Mercedes team is so often the dominant force in Russia, having won all of the five races staged here.

But Hamilton, 65 points ahead of Bottas in his quest for a sixth world title, looks to have his work cut out after finishing behind both a Red Bull, a Ferrari and his teammate, too.

With Verstappen to serve a five-place grid penalty following changes to his engine, Ferrari look well-placed to win for a fourth time in as many races.

Vettel, who made a slight mistake on his speedy run, was fifth in the second session, 1.039 off the pace.