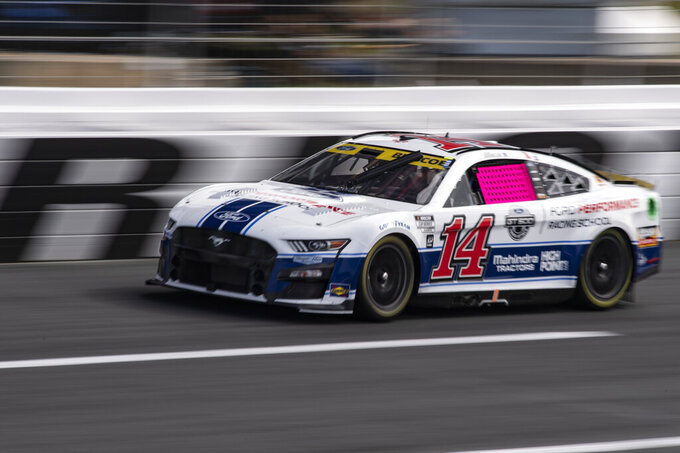 LAS VEGAS (AP) — Tyler Reddick is determined to close his tenure at Richard Childress Racing on a high note, and hours after announcing he'll drive for 23XI Racing next season, won the pole at Las Vegas Motor Speedway.

Reddick, who said his Chevrolet was subpar in Saturday morning practice, rebounded for an electric lap at 184.603 mph to earn the top starting spot for the opening race of the third round of NASCAR's playoffs.

It is the third pole of the season for Reddick, who also has three Cup wins but was eliminated from the playoffs in the opening round. He announced in July that he was moving to 23XI Racing in 2024 when his RCR contract ended, and team owner Richard Childress remained adamant that Reddick would be in one of his Chevrolets next season.

But RCR has since signed Kyle Busch and no longer needs Reddick to fulfill his contract. Kurt Busch, meanwhile, announced Saturday that the concussion he suffered in July has forced him to step away from full time racing — opening the No. 45 Toyota for Reddick to move into a year early.

“I'm really excited about next year, but there's still a number of races left this year and I'm going to continue to remain focused and do everything I can for my team,” Reddick said.

Austin Cindric, who was eliminated from the playoffs last week, qualified second for Sunday's race in a Ford from Team Penske. He was 0.05 seconds slower than Reddick.

Christopher Bell, who won at Charlotte last Sunday to advance into the third round of the playoffs, qualified seventh in a Toyota for Joe Gibbs Racing. Ross Chastain of Trackhouse Racing was 11th, Chase Briscoe of Stewart-Haas Racing qualified 16th, Chase Elliott of Hendrick was 20th and Denny Hamlin of JGR will start 31st, lowest of the eight remaining playoff drivers.

Elliott, who had been a handful of laps away from winning a career-high sixth win of the season before a late caution jumbled the entire race, was frustrated and in a conversation with teammate William Byron when the camera approached.

The four-time most popular driver initially waved the camera away before physically pushing the lens away and then shooing off the operator. He said Saturday no one from NASCAR had spoken to him about it; NASCAR later clarified it spoke to representatives for Elliott.

Either way, Elliott said he was wrong.

“Probably not a wise move on my behalf, but I asked the guy to give us a little space, and he didn't, really,” Elliott said. “Frustration after a tough race, but probably not the right move for me to make.”

Chase Briscoe used a furious late push last week to advance to the round of eight of NASCAR's playoffs for the first time in his Cup career. He advanced by two points over reigning champion Kyle Larson.

But NASCAR has since ruled that Stewart-Haas Racing manipulated the finish of the race when Briscoe teammate Cole Custer slowed on the final lap to hold up traffic and allow Briscoe to gain positions. SHR is appealing the $200,000 in fines, indefinite suspension of Custer's crew chief and their loss of points, and team co-owner Tony Stewart said “I’m so mad at NASCAR" he can't even discuss the allegation.

Briscoe said none of it really involves him as he was unaware of what Custer was doing, already had the positions needed to earn the final spot in the playoff field, and drove so frantically on the final lap that he wasn't going to be denied.

“I don't feel like I'm in any controversy. I'm just trying to figure out what I've got to do to move on to (the championship race),” Briscoe said.

Briscoe acknowledged its “been a really tough couple of weeks at Stewart-Haas Racing” and the mood at the organization has been one of disappointment. But he said getting into the third round has helped boost morale.

“There is still a lot of focus on having a shot to win the championship,” Briscoe said. “I think that's the one positive that we still have that going for us as a company.”