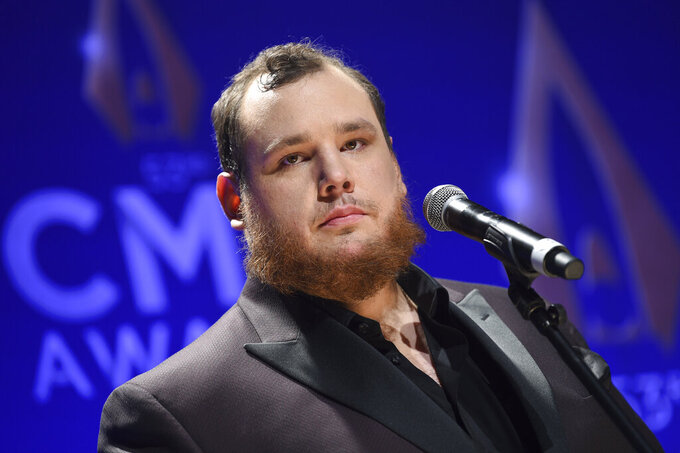 FILE - Singer-songwriter Luke Combs speaks in the press room after winning awards for male vocalist of the year and song of the year at the 53rd annual CMA Awards at Bridgestone Arena, in this Wednesday, Nov. 13, 2019, file photo. NASCAR will attempt some normalcy at the season-opening Daytona 500 with a live pre-race concert featuring country music star Luke Combs. (Photo by Evan Agostini/Invision/AP, File)

CHARLOTTE, N.C. (AP) — NASCAR will attempt some normalcy at the season-opening Daytona 500 with a live pre-race concert — the first big performance at a track during the pandemic — featuring country music star Luke Combs.

Combs, who performed virtually for NASCAR's season finale in November, has not done a live show since the COVID-19 pandemic began in March. NASCAR, which prides itself on its elaborate pre-race pomp and entertainment, has not had a major live performance since PitBull and Blake Shelton performed in the final race before sports were halted.

“I can’t wait to feel that energy again. Man, I miss it,” Combs wrote in an email to The Associated Press. “It’s the first live show I’ve played since March of 2020, and I’d say it’s pretty dang huge.”

The NASCAR season opens Feb. 14 at Daytona International Speedway, where the Daytona 500 will conclude a week of racing. The 63rd running will be held in front of limited spectators, but officials wanted to continue some of the traditions surrounding “The Great American Race.”

“The tradition of the Daytona 500 pre-race show has been an incredibly popular hit with race fans,” track president Chip Wile said. “Luke has been one of the most influential country music stars over the last few years and his fan appeal is incredible. It’s a bonus, too, that he loves our sport."

Born in Charlotte but raised in Asheville, Combs made NASCAR races a weekly viewing staple alongside his grandfather.

“If you would’ve told me back then that I’d be performing at the Daytona 500 one day, I wouldn’t have believed you,” said Combs, a longtime fan of Dale Earnhardt Jr.

The Billboard Music Award-winning artist is eager for the opportunity to perform live again as most musicians have been sidelined to recording studios since the pandemic began. He said he's missed the crowd interaction and energy, as well as touring with his band.

“It’s the thing that allows the fan to be connected to the artist in a very intimate way, something that you can’t really explain. Live music is a way for us to be able to disconnect from everything else, and just be there in the moment,” Combs said. "The pandemic has definitely hurt our industry as a whole, but I personally just really miss being on stage every night with the guys and the fans.

“It’s why I do what I do. When I said ‘I miss the road, I miss my band’ in my song ‘Six Feet Apart,’ I really meant it. It’s hard being away from (the fans) and I can’t wait to get back out there.”