McLaughlin wins in Portland as Will Power widens title lead 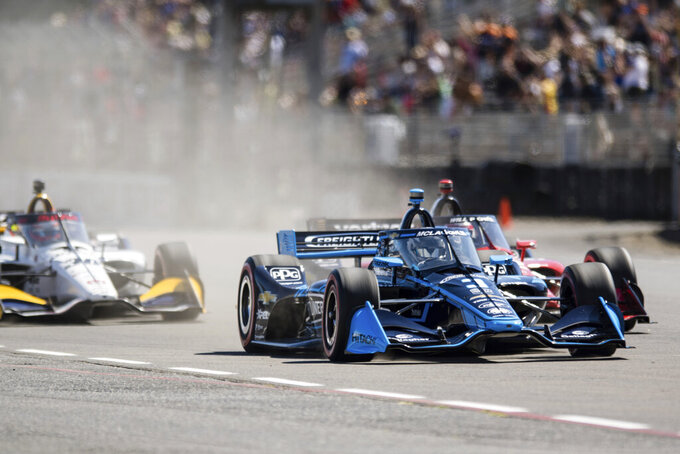 PORTLAND, Ore. (AP) — Scott McLaughlin led a Team Penske rout at Portland International Raceway by scoring his third victory of the season in a 1-2 finish that moved Will Power one race closer to the IndyCar championship.

McLaughlin led 104 of the 110 laps Sunday to pick up his third victory of the season. He trails only Penske teammate Josef Newgarden (five) in most series wins, but an inconsistent season has the New Zealander clinging to any title chances.

McLaughlin goes to next Sunday's season finale at Laguna Seca in California ranked fifth in the standings, 41 points behind Power but still mathematically in the hunt.

“We did exactly what we needed to do this weekend which was win and get maximum points,” McLaughlin said. “We need to keep ourselves in it and we're a long shot, but we've got a shot.”

Either way, IndyCar goes to its finale locked in the tightest championship battle in 19 years. The 41 points that separate McLaughlin in fifth to leader Power is the closest since 30 points separated the top five in 2003, when the series was still called the Indy Racing League.

Power had a relatively easy drive but never enough to challenge McLaughlin for the win. In settling for second, he takes a 20 point lead into the finale over both Newgarden and six-time IndyCar champion Scott Dixon.

“We’re in the best position, we’ve got the best shot, we'll do the best we can," Power said.

Dixon finished third but gained no ground in the title fight; Newgarden dropped from fourth on the restart with 22 laps remaining to finish eighth and lose 17 points to Power in the Penske championship battle.

“We're still in the fight,” said Dixon, who started 16th. “We need to stop getting these most improved of the race awards.”

Newgarden lamented his late tire choice, which left him a sitting duck over the final stint.

“At this point, it just kind of is what it is. I'm going to go try to win that race and go for broke,” Newgarden said. “I don't know how Laguna is going to play, but we're going to go to play and see what happens.”

The three Penske entries were the class of the field in Portland, where the team used its final test of the season to prepare for Sunday. The trio was fast in every session and had a clear advantage over Chip Ganassi Racing, which chose to use its final test at Laguna Seca in anticipation of the finale.

Ganassi had Dixon, Indianapolis 500 winner Marcus Ericsson and reigning IndyCar champion Alex Palou in the title hunt, but only Palou had a decent qualifying effort. Dixon and Ericsson failed to advance out of the first qualifying group, and Ericsson rallied only to 11th. The Swede is 39 points behind Power, fourth in the standings.

Although Palou finished 12th and Pato O'Ward was fourth, both were eliminated from title contention.

“Didn't have enough for the Penske boys. They dominated everyone, not just us,” O'Ward said.

IndyCar settles its championship with next Sunday's finale at Laguna Seca Raceway in California. Colton Herta is the two-time defending race winner.