Marco Andretti to step back from full-time IndyCar racing 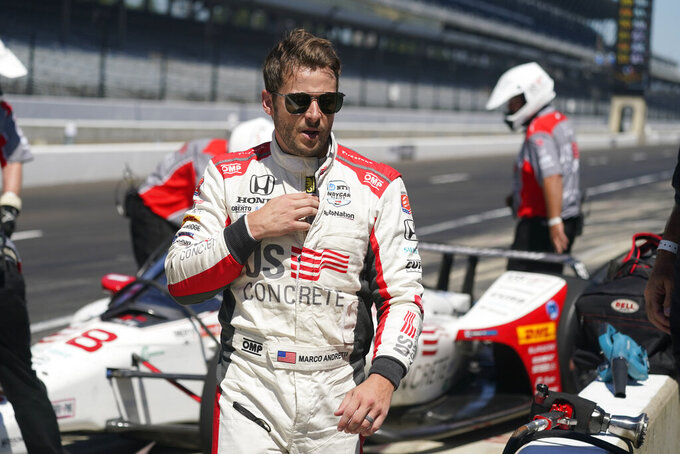 FILE - Marco Andretti walks in the pits during the final practice session for the Indianapolis 500 auto race at Indianapolis Motor Speedway, in this Friday, Aug. 21, 2020, file photo. Marco Andretti will not run a full IndyCar schedule in 2021 as last year’s Indianapolis 500 pole-winner said he’s reprioritizing his racing. He’s still expected to compete in the Indy 500.(AP Photo/Darron Cummings, File)

Marco Andretti will not run the full IndyCar schedule this season as the third-generation driver reprioritizes his racing career.

Andretti will compete in the Indianapolis 500, the historic race his family has notoriously won just once, and assist Andretti Autosport with preseason testing and development. He will be in a car next week testing in Sebring, Florida.

Beyond that, his schedule is open.

“Marco and I have discussed this at length. I support and respect his decision to take a focus on other areas of life, and maybe even other forms of motorsport,” team owner Michael Andretti said Friday of his son.

Andretti followed his grandfather, father and cousins into IndyCar racing but has never found the same success as his famed family. Mario Andretti, his grandfather, ranks second on IndyCar's all-time win list with 52 victories including the 1969 Indy 500. Michael Andretti won 42 races.

Marco Andretti has two career victories in 15 seasons, his last in 2011. The 33-year-old won the pole in August for the Indianapolis 500 but he didn't lead a lap and finished 13th.

He was 20th in the final season standings, lowest of all full-time IndyCar drivers.

“I think for any multi-generational athlete, it can be really challenging to find your own ground and make your own name on top of your family's," Michael Andretti said. “Marco has always had the courage to chart his own path and I'm proud of the career he's built for himself and the person he's become. I know this decision wasn't easy."

Both father and son stressed Andretti is not retiring.

Marco Andretti said he hoped to compete in sports car racing alongside his cousin, Jarett, and marquee events such as the Rolex 24 at Daytona, 12 Hours of Sebring and Le Mans.

“I definitely am going to keep driving,” he said. "I still have a deep passion for it and have unfinished business to take care of and some boxes that I want to check before I consider retiring as a driver.

“I remain very hungry to win the Indy 500. It is our biggest stage and the place that I feel I bring the most to the table as a driver.”

Andretti as a rookie was passed while leading on the final straight by winner Sam Hornish Jr. in his 2006 Indy 500 debut. He finished second that year, his best finish in 15 races. He was third in 2010 and 2014.