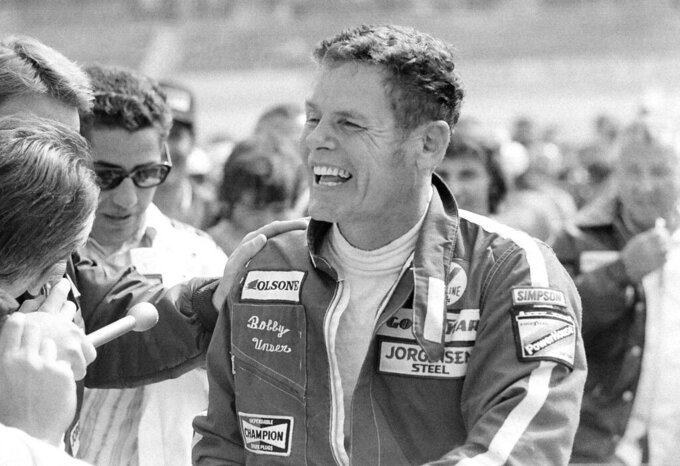 FILE - Bobby Unser is a happy man as he accepts congratulations in the winner's circle for his triumph in the California 500 at Ontario Motor Speedway in Ontario, Calif., March 11, 1974. He beat his brother, Al, by a half second to win $70,250. Al Unser, one of only four drivers to win the Indianapolis 500 a record four times, died Thursday, Dec. 9, 2021, following years of health issues. He was 82. (AP Photo, File)

Andretti and Foyt, the two biggest rivals in IndyCar history, each respected Unser for another reason — his ability to race hard, fair and smart.

Unser, one of only four drivers to win the Indianapolis 500 four times and one of the most successful drivers in IndyCar history, died early Friday at his home in New Mexico. He was 82.

To giants of the sport, such as Andretti and Foyt, Unser's trademark style was what set him apart during the series' greatest generation.

“Parnelli (Jones) always used to say Al knew how to be aggressive and patient at the same time, which was really important in those days because of the reliability of the equipment," Andretti told The Associated Press, referring to the team owner who paired Unser and himself as teammates in the 1970s. “He knew when to be patient, when he had to be patient and everyone was falling by the wayside. He was very astute about what he needed to do in racing and everybody admired for him it."

While fans revered the sometimes heated IndyCar rivalries of the 1960s, 1970s and 1980s, Unser found a way to carve out his own niche amid Foyt's flamboyance and Andretti's popularity. Even his more outspoken older brother, Bobby, a three-time 500 winner, developed his own fan following before going into broadcasting. Bobby Unser died in May.

Al Unser's quiet, affable personality led to lifelong friendships in the racing community — even with those he beat en route to 39 career victories.

“So sad to hear about the passing of Al Unser SR," Michael Andretti wrote on Twitter. “He was a class act and really nice guy. I learned a lot racing against him in my early years. His racing craft was as smart as it gets."

It was one reason the feisty Foyt and Unser competed together in the 1987 24 Hours of Daytona, finishing fourth, and why Foyt, the first four-time Indy winner, helped Unser make the first of his 27 career 500 starts by providing him with a Ford-Lola in 1965. Unser qualified 32nd and finished ninth.

“His brother was working on a Maserati, I think, and it wasn’t running fast enough so I said: ‘I’ve got an extra car if you want to run it. It’s not handling real well,'" Foyt told the AP. “He said, ‘Well, fine.' He made the race. I thought a lot of Al. We're pretty good friends. He was a smart racer."

And like Foyt and Andretti, racing coursed through the Unser family's veins.

His father, Jerry, and two uncles, Louis and Joe, also competed. So did his three older brothers. Al Unser Jr. won the 500 twice and they were the first father-son tandem to reach victory lane at Indianapolis. When Little Al was absent from Indy during the IRL-CART split, his two cousins — Johnny and Robby — kept the family tradition intact by making seven Indy starts before Unser Jr. returned in 2000.

“I remember we were in Springfield, Illinois, and Michael, Jeff (Andretti) and Al Jr. were playing in the mud as kids. Their mothers had to hose them off so we could go back to a restaurant later on," Mario Andretti recalled.

“The two families still have a great bond, it’s not like losing a competitor. For me, it’s like losing a family member," Andretti said.

At times, the friendly competition spilled over into other forms of racing.

Andretti remembers traveling to Unser's home in New Mexico where they raced snowmobiles, how Unser talked him into competing in the Pikes Peak race that he later won and how the two drivers competed on the water in Pennsylvania.

The night before the race, Andretti swapped pumps, unaware Unser had ordered special aftermarket equipment. Andretti wound up winning easily; rather than getting mad, Unser simply wanted to get even.

“He thought he had the upper hand on me and asked me about it, and I told him ’I have a special wax that not many people could get,'" Andretti said. “He spent hours and hours trying to get the wax. I worked all night to prove a point and he’s trying to order this special wax."

Those who knew Unser best understood the combination of humility and success is what made him a fan favorite, an admired adviser and a respected competitor.

“You help someone make their first race and see him being one of the first four-time winners, it made me happy because he deserved it. He worked hard," said Foyt, who turns 87 next month. “He was just a super guy. He was a good race car driver, he just wouldn’t brag about it.”