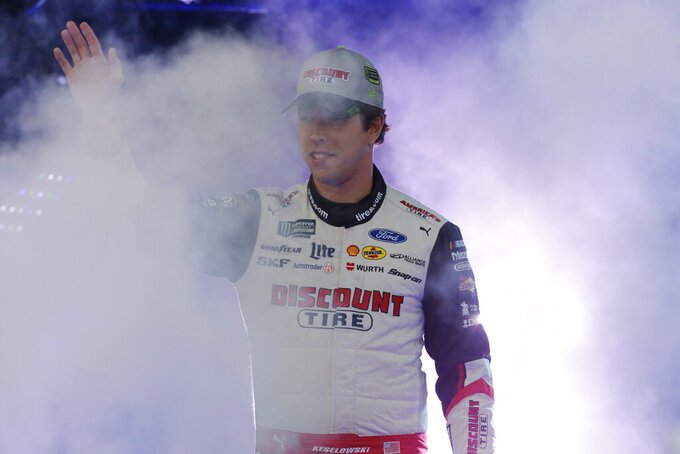 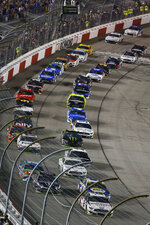 RICHMOND, Va. (AP) — The Latest on the NASCAR race at Richmond Raceway (all times local):

The victory completed a redemptive finish for Truex, the championship leader coming into the race. He was leading with 87 laps remaining when Ricky Stenhouse Jr., running on fresher tires, spun him out, allowing Busch to sail by for the race lead.

But Truex dropped only to third under caution, then gradually reeled his Joe Gibbs Racing teammate in and pulled away.

Gibbs cars won for the 15th time in 28 races this season, and finished in the top four spots, a first for the car owner.

Kyle Busch grabbed the lead on pit road to begin and never let it go in winning the second stage of the NASCAR Cup Series race at Richmond Raceway on Saturday night, the second race of the first stage of the playoffs.

Busch barely held off a challenge by Joe Gibbs Racing teammate and Stage 1 winner Martin Truex Jr. in the final laps of the stage with help from Williams Byron, who desperately, and unsuccessfully, tried to keep from going two laps down before the caution.

The stage ended with the Gibbs team, which has dominated the series all season by winning 14 of the first 27 races, holding onto the top four spots with Busch and Truex followed across the start-finish line by Denny Hamlin and Erik Jones. Brad Keselowski was fifth.

The Stage win is a series-high 11th of the season for Busch.

Martin Truex Jr. passed Brad Keselowski for the lead just past the midpoint of the 100-lap first stage on Saturday night's NASCAR Cup Series race at Richmond Raceway, the second race of the first stage of the playoffs.

It's just his fifth stage win of the season for Truex, who started eighth. The championship points leader is trying for a sweep of this year's races on the 0.75-mile oval, having gained his first victory on the track in April.

Kyle Busch was second in the stage, but 3.8 seconds behind the leader. Keselowski was third, followed by Denny Hamlin and Kevin Harvick.

Just 17 cars remained on the lead lap after the first 100 laps.

Brad Keselowski has led the field to green for the start of the NASCAR Cup Series playoff race at Richmond Raceway.

Keselowski is seeking just his second career victory on the 0.75-mile oval, and he won the first from the pole position.

Kevin Harvick started on the outside of Keselowski with a slew of accomplished Richmond veterans also near the top.

Harvick and Denny Hamlin, who started sixth, have each won three times on the track. Clint Bowyer, who started fifth, has won twice.

Bowyer is racing with the word "Grandma" above the door of his Ford, a tribute to his grandmother, who died this week.

Brad Keselowski is hoping he can make history repeat itself.

The Team Penske driver earned his only victory at Richmond Raceway on Sept. 6, 2014, when he started from the pole and led 383 of the 400 laps. He'll be in that same starting spot Saturday night for the second of three races in the first segment of the playoffs in NASCAR's Cup Series.

Keselowski will have plenty of accomplished company at the front of the field.

Kevin Harvick, who has three victories on the 0.75-mile, D-shaped oval, will be on the outside in the front row, with Chase Elliott and Kyle Busch in the second row. Busch leads all active drivers with six career victories at Richmond, and two-time winner Clint Bowyer and three-time winner Denny Hamlin are in the third row.

Championship leader Martin Truex Jr., who won at Richmond in the spring, will start eighth.