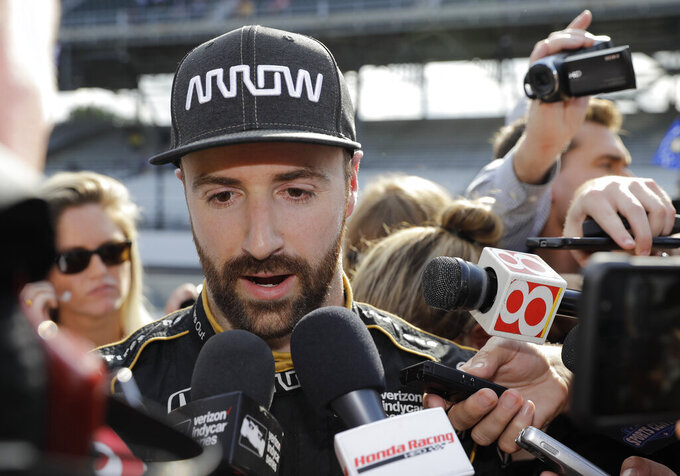 The head of McLaren said Friday its IndyCar team will pay James Hinchcliffe not to drive for them in 2020, a change of direction for the organization set in motion when young driver Pato O'Ward became available.

Zak Brown said the decision this week to remove Hinchcliffe from the Arrow McLaren SP car was strictly business.

The CEO of McLaren had repeatedly said Hinchcliffe would be part of the team next season after McLaren came aboard. Hinchcliffe had driven for team co-owner Sam Schmidt since 2015, but with McLaren joining as a partner, Brown engineered the youngest lineup in IndyCar with O'Ward and Oliver Askew, the last two Indy Lights champions.

"I am well aware of the lack of popularity of the decision, I totally get it," Brown said at Circuit of the Americas, site of this weekend's Formula One race. "We commented he was going to be in the car in 2020 and at the time, that was true. In business and racing, as you all know, things change. When Pato O'Ward came on the market ... we decided to take a long-range view on what was best for the team and to go with Pato and Oliver."

O'Ward won nine races while claiming the 2018 Indy Lights title. The 20-year-old Mexican is considered a future star and spent much of last season in Red Bull Racing's junior program until his release late last month. The Arrow team had already decided to replace Marcus Ericsson with Askew, a 22-year-old American who won seven races and the Lights title this season.

Brown said the IndyCar organization could not overlook the opportunity of developing the two young drivers.

"It was a decision based on what we thought was best for our race team," Brown said. "We've chosen them because we think they are bright stars for the future."

He said in a Thursday statement he was "shocked" to learn he would not be driving the No. 5 car next season and noted the poor timing. He'd been repeatedly told by Brown and Schmidt that the final year of his contract was being honored — even as he had ties to unwind with partner Honda — and his termination came during the offseason with almost all rides taken.

"Obviously it's very late in the game, but my team is working flat out to try and salvage a full 2020 IndyCar campaign," Hinchcliffe said.

Brown intimated it was not a financial decision to take on two cheap, young drivers — Askew has bonus money from the "Road to Indy" ladder system that pays for the Indy Lights champion to race three IndyCar races including the 500 — and that the organization knew there would be backlash in benching Hinchcliffe.

Although Hinchcliffe is clear to find another job, Arrow will owe him the balance of anything he doesn't recoup from another job.

"We will be honoring the balance of his contract, we will continue to pay him. Obviously race car drivers like to race, so I understand his disappointment," Brown said. "We've got three driver salaries and two drivers in the cars, but commercially the team is well funded and we've got some partners already signed. Within James' fan base, and we understand how popular he is, we took the decision knowing there were going to be some unhappy James fans. But there are also some people excited to see two Indy Lights champions and the youngest lineup."