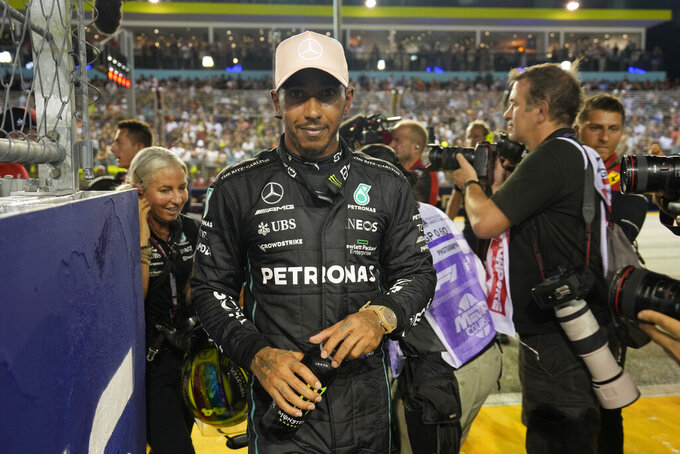 Lewis Hamilton was “not trying to make a statement” by wearing a nose stud at the Singapore Grand Prix on Saturday, and the seven-time Formula One champion got his wish for leniency granted when stewards cleared him for putting it in again.

No action was taken against Hamilton, but his Mercedes team was fined 25,000 euros ($24,500) for not declaring on their team forms that he was wearing the nose stud.

Hamilton said he explained to stewards before qualifying started that he needs to keep the stud in due to complications linked to a blood blister on his nose, which occurred because he kept having to take the stud in and out between races.

“It got infected because of that and I was just continuing on with this infection, and I had a blood blister and I just had quite a sore on my nose. This is all stuff I’ve told them (the stewards) before the qualifying," Hamilton said after finishing an impressive third in qualifying. “(I) had to have the blood blister fixed, because there was puss and blood. In the last two weeks it’s started to heal and they (doctors) have asked that I keep it (the nose stud) in.”

Hamilton said he has a doctor's letter showing all this and stewards accepted his explanation after reviewing footage.

“Broadcast footage showed HAM (Hamilton) wearing an item of jewellery in the form of a body piercing (nose stud) during the session,” stewards wrote in their verdict. “HAM admitted this fact but explained that he had been advised by his doctors not to remove it for the time being. In response to a request by the stewards, the team produced reports from a medical practitioner which confirmed HAM’s explanation.”

Still, Hamilton doesn't buy the reasons given for not being allowed to wear jewelry in the car — the risk of fire and intense heat — and does not believe it to be a genuine safety issue.

“One of the excuses I was given a long time ago was about heat, and if you're in a fire metal conducts heat,” Hamilton said. “But our (racing) suit is covered. Our belts, our zip is metal, our buckles ... It's all a bit silly. Hopefully they'll be sensible.”

Shortly after third practice had ended at the Marina Bay Circuit, stewards announced Hamilton was being investigated for an alleged infringement of Appendix L, Chapter III of the FIA’s International Sporting Code, which prohibits the wearing of jewelry.

The summons related to Hamilton's nose stud, which he had previously removed when the FIA's jewelry ban was applied.

“Basically, I’ve had my jewelry and my nose stud for years and we obviously had that whole commotion at the beginning of the year," Hamilton said. “At the time, they gave me a therapeutic exemption until I could find a solution. I went and got it taken out and tried to find a solution to put it in and (take) it out (between races).”

Hamilton kept his nose stud in at the Monaco GP in late May after motorsport’s governing body extended the exemption on drivers wearing jewelry until the end of June.

He expressed frustration at the issue.

“Honestly, I feel like there’s just way too much time and energy being given to this,” Hamilton said in Monaco. “We shouldn’t have to keep on revisiting this thing every weekend. We’ve definitely got bigger fish to fry.”

Earlier in May, he protested the FIA’s crackdown on body piercings by showing up at the Miami GP wearing every piece of jewelry he could fit on his body and suggesting he was willing to sit out races over the issue.