F1 remains confident in US Grand Prix future in Texas 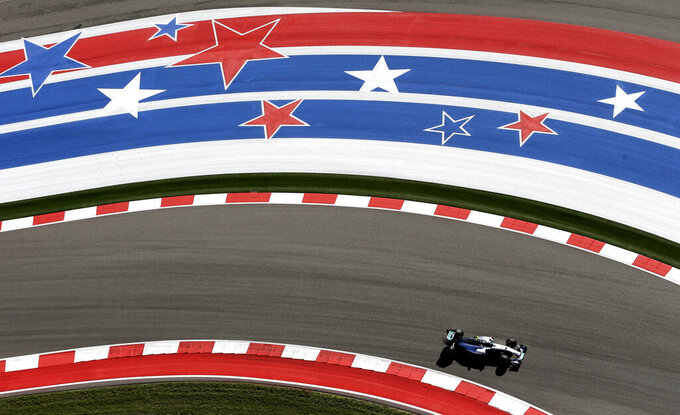 FILE - In this Oct. 31, 2014, file photo, Mercedes driver Nico Rosberg, of Germany, drives through the course during the first practice session for the Formula One U.S. Grand Prix auto race at the Circuit of the Americas in Austin, Texas. Formula One expects to race the U.S. Grand Prix at the Circuit of the Americas for “many years to come,” a series official said Tuesday, May 28, 2019, despite the track’s failed effort to secure $25 million in Texas public money it was denied in 2018. Sean Bratches, F1’s managing director of commercial operations, suggested the series remains confident in the Texas race’s’ financial security. (AP Photo/Eric Gay, File)

AUSTIN, Texas (AP) — Formula One expects to race the U.S. Grand Prix at the Circuit of the Americas for "many years to come," a series official said Tuesday, despite the track's failed effort to secure $25 million in public money it was denied in 2018.

"We have a great relationship with (the track) and it is a highly regarded and valued part of our season," Bratches said. "We look forward to the Grand Prix in Austin this October and for many years to come. (It) is a circuit that is loved by teams, drivers and fans."

The Circuit of the Americas relies heavily on annual payments from the state's Major Events Reimbursement Program to cover race expenses — including an estimated $30 million licensing fee paid to F1 — and has collected more than $150 million in public money since 2012. The fund is typically used to help Texas host events such as the Super Bowl and the NCAA basketball Final Four, but the annual U.S. Grand Prix has been the biggest recipient of cash by far.

Race organizers can still apply for money for future races. The problem with the 2018 race came when organizers were late in filing a mandatory anti-human trafficking plan that is supposed to help local authorities combat prostitution around the event. That omission disqualified the application under law.

Shortly after the race last November, track President Bobby Epstein made a series of campaign donations totally nearly $100,000 to Gov. Greg Abbott, whose office runs the reimbursement program; Lt. Gov. Dan Patrick, who presides over the state Senate; and several lawmakers whose districts include or border the race track.

A group of lawmakers attempted to rewrite state law to allow the track to re-apply for the 2018 money, but the effort failed before the Legislature adjourned Monday until 2020.

State Rep. John Frullo, the Republican who led the effort to help the racetrack, called the race, "important not only to Austin, but the state of Texas and the United States." Critics have called payments to the Circuit of the Americas a corporate handout. The Formula One race is one of the few events specifically designated by law to be eligible for millions of dollars from the reimbursement program.

"This case highlights the vast difference between the special treatment offered a high-profile project and its wealthy owner compared to the obstacles the state puts between lower-income folks and the health care and other benefits they are fully entitled to receive," said Dick Lavine of the Center for Public Policy Priorities.