Wickens caps week with another win and birth of his son 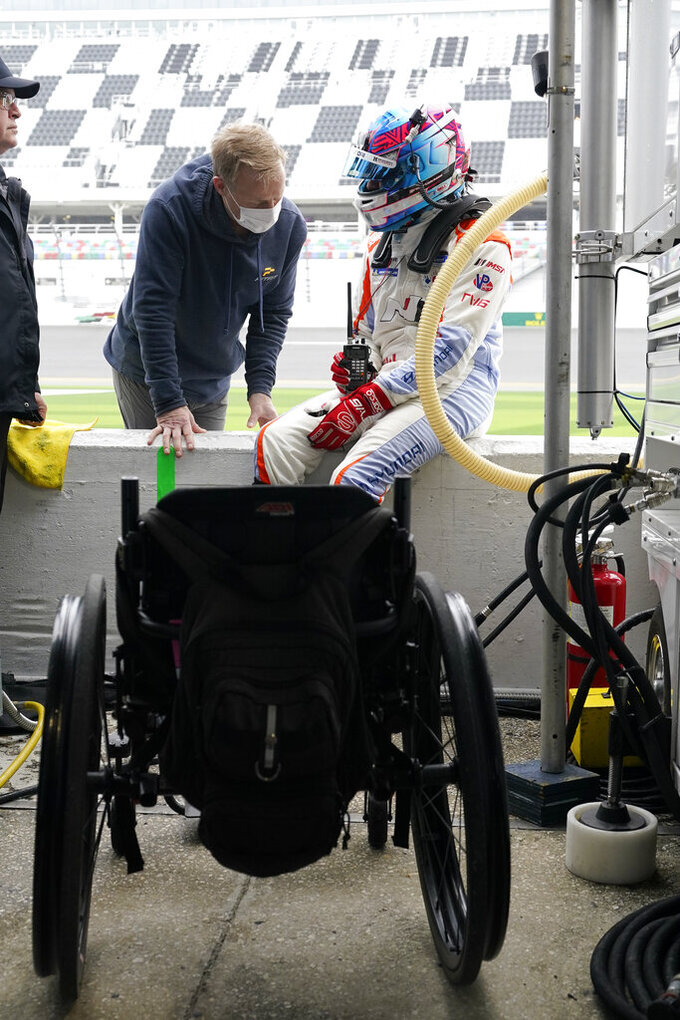 BOWMANVILLE, Ontario (AP) — What a week for Robert Wickens, who picked up his second win in seven days on Saturday while celebrating the birth of his first child.

Wickens returned to his native Canada and teamed with countryman Mark Wilkins to win the Touring Car class of the IMSA Michelin Pilot Challenge race at Canadian Tire Motorsport Park.

The win followed their victory last week at Watkins Glen in New York, which marked Wickens' first victory since he suffered a career-halting spinal cord injury in a 2018 IndyCar race. He r eturned to competition this year with Bryan Herta Autosport in a specially equipped Hyundai that allows Wickens to accelerate and brake using hand controls.

“It’s been a fairytale, really,” Wickens said. “The win at Watkins Glen felt very deserved. We’ve worked hard. We’ve been there every race this year. It finally clicked when we got that win. We thought, ‘Let’s take this momentum into our home race.’”

But his return to Canada was interrupted when Wickens' wife, Karli, went into labor two weeks early. Wickens and Wilkins were in the middle of the track walk Thursday when Karli called and told her husband he needed to rush back to Indianapolis.

“She said, ‘I need you home tomorrow morning,’” Wickens said. “I can’t thank everyone at Bryan Herta Autosport enough – not only for being understanding, but for not making me feel like there was any pressure. They made it very clear that family always comes first."

The couple welcomed their son, Wesley Joseph, on Friday and Wickens made it back to the track Saturday to turn his first laps on the circuit. He started last in class, worked his way up to third, and turned the No. 33 Hyundai Elantra N TCR over to Wilkins midway through the race.

“I’ve never been so prepared ahead of a race,” Wickens said. “But I’ve also never jumped into a race without a single lap of practice. Honestly, it’s just amazing. I definitely didn’t expect to win."

Wilkins drove to the lead on a restart with 20 minutes left and led a podium sweep for three of Herta's cars.

“The story is really Robert," Wilkins said. “Coming in with no laps and passing three cars on his first lap? He hadn’t turned a lap at all here in I don’t know how many years. Mega drive.”

Wickens, who has a consultant role with Arrow McLaren SP in IndyCar, was being cheered by the IndyCar paddock at Mid-Ohio Sports Car Course.

“It is not only impressive to see that he has the courage to step back in the race car and get adjusted to the hand controls and be heads up about everything, and really relearn how to drive a race car,” said Colton Herta, son of Wickens' team owner, Bryan Herta.

“It’s impressive when you can just do that, but then also be very fast and be winning a race. It shows the dedication and passion that he has for racing. I think everyone at IndyCar is really happy to see that.”

“It’s been a blur,” Wickens said. “Everything up until Thursday afternoon was pretty calm. It’s been a world of emotions. I think I got all my tears out on Friday when our son Wesley was born and he was healthy. I just can’t wait to get back home and see the baby again.”