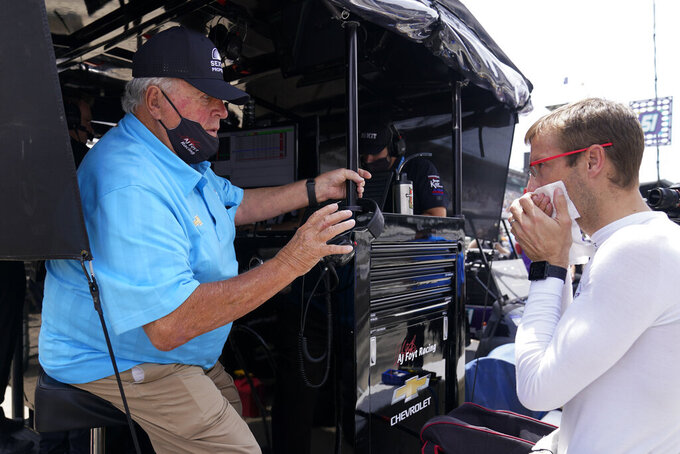 INDIANAPOLIS (AP) — Tony Stewart had one favorite driver growing up, and if he ever reached the same level as A.J. Foyt, he hoped to emulate his hero.

Although Stewart made his fame and fortune in NASCAR, his no-nonsense, hard-nosed style was reminiscent of Foyt. The two built a close friendship that has stretched over decades during their Hall of Fame careers.

On the 60th anniversary of the first of Foyt's four Indianapolis 500 victories, Stewart will sit side-by-side next to his idol on the pit stand this weekend as Foyt's guest for the celebration.

“It won’t be much fun. I’ve known him too damn long,” Foyt said. “I’d like to win the race so he could know what victory circle is like on the 500 with IndyCar. That would be the most fun week I’ve had, both of us.”

That's classic Foyt, taking aim at his buddy Stewart for the score sheet at Indianapolis Motor Speedway. Now 86, Foyt is one of only three four-time winners of “The Greatest Spectacle in Racing” with wins in 1961, 1964, 1967 and 1977.

Stewart, who grew up an hour away from IMS in Columbus and earned money driving a tow truck in the speedway vicinity, only hoped to one day get a chance to run an Indy 500. He made five career Indy 500 starts, — he even started on the pole as a rookie in 1996 — but never finished higher than fifth.

In NASCAR, though, Stewart won the Brickyard 400 twice.

Stewart turned 50 earlier this week and wasn't alive for Foyt's first three Indy 500 wins. But the two are close enough friends that he lets Stewart count his wins as his own.

“Tony has got four. He was pulling for me, so he’s got part of the wins, too. I know deep down he was hoping I would win,” Foyt said.

As the friends approached Sunday’s reunion, they reflected on the meaning of Indianapolis Motor Speedway to their lives.

Foyt said the track is the single most influential venue in his career.

“All I can say is Indianapolis is what made A.J. Foyt," he said. "A.J. Foyt didn’t make Indianapolis and like Tony said, Indianapolis, all the world knows that race, and you’ve got a bunch of great racetracks, don’t get me wrong, but you only have one Indianapolis.”

Stewart landed a job in 1995 as a crew member for A.J. Foyt Racing on Eddie Cheever's car for the Indianapolis 500. Cheever was involved in a crash on the first lap, bringing Stewart's experience to an end 10 seconds after the start.

The next year he was on the pole and had never faced such nerves in the buildup to the green flag.

“That’s the closest I’ve ever been to throwing up before a race. The nerves were at a level that I had never seen before in my entire life, in any form of motorsports, leading up to my first Indy 500,” Stewart said. “It was extremely hard to stay composed. To go from being a crew member to literally the next year starting the race from the pole was definitely a drastic shift."

Foyt has turned over most of the day-to-day operations of A.J. Foyt Racing to his son, Larry. The team tried to qualify four cars for the 33-car field, but Charlie Kimball missed the cut. J.R. Hildebrand qualified and will compete in a replica livery of the car Foyt drove to his 1961 win.

Stewart cites the 1982 Indy 500 race as the Foyt memory of his that will live forever. Foyt had suspension damage and, not satisfied with the crew repairs, climbed out of his car and grabbed a hammer to do his own work. He then returned to the race.

“That just shows the true grit and determination A.J. has always had,” Stewart said.

There's a 36-year age gap between the two, but Stewart would have loved a chance to competitively race against his hero.

“He’ll even admit he’s glad I was born later. I’d have kicked his ass. Are you kidding? I mean, let’s be realistic here,” Stewart said. “I tell everybody if there was one thing I could have changed in my life: I would have been born a lot earlier because that would have been the ultimate in motorsports to me would have been to race in the era that A.J. raced in and get to race with my heroes.”