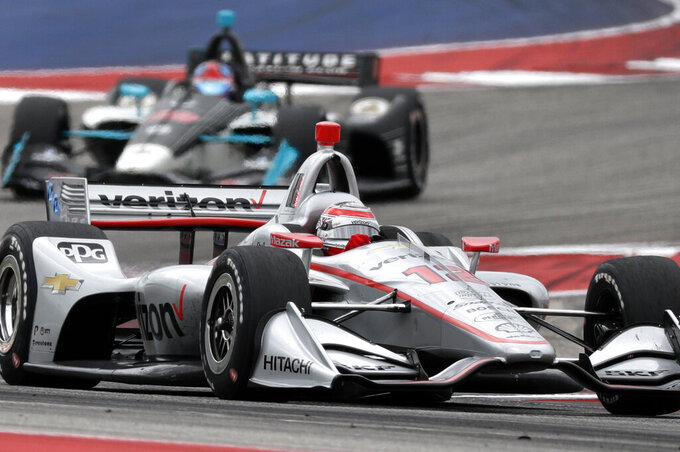 Will Power (12), of Australia, works through a turn during the IndyCar Classic auto race, Sunday, March 24, 2019, in Austin, Texas. (AP Photo/Eric Gay)

AUSTIN, Texas (AP) — Everything went Colton Herta's way on Sunday, from the victory on the race track to the sparkling wine on the podium instead of apple cider.

The 18-year American rookie became the youngest winner in IndyCar history when he captured the IndyCar Classic after a late-race crash near the entry to pit row helped him steal past the leaders to the checkered flag.

Flanked on the podium by 28-year-old Josef Newgarden and 38-year-old Ryan Hunter-Reay, Herta was handed a bottle of sparkling wine for the victory celebration while someone handed Newgarden the cider.

"They gave me his drink, and gave him mine. Which is very cool of Texas," Newgarden said.

Herta's win also delivered the first victory for Harding Steinbrenner Racing , where George Steinbrenner IV — yes, of the Steinbrenner baseball family — is the youngest co-owner in series history and the youngest owner of a race-winning car at age 22. After the victory, the New York Yankees tweeted congratulations to the victors.

Herta was running a distant third behind Team Penske's Will Power and Andretti Autosports' Alexander Rossi until James Hinchcliffe bumped rookie Felix Rosenqvist into a spin and then the wall near the entry to pit lane.

Power, who started from pole position and dominated through 45 laps, lost his big lead when the caution flag came out, and then had his race end with a driveshaft failure during his last pit stop for a late tire change. Rossi finished ninth.

Power started from pole position and could have earned a $100,000 bonus if he had won the race.

"Massively disappointed man. (To) lead so many laps," Power said. "The yellow didn't get us, the drive shaft did."

Herta still had work to do to stay ahead of Newgarden and Hunter-Reay, both former IndyCar champions. Herta dialed up the speed that made him so quick on the track in preseason testing.

"He's been quick since he hit the track," Hunter-Reay said. "At first sight I wouldn't trust that guy with my Honda Civic, but he's very talented. This is the big league and he just won an IndyCar race."

The previous youngest race winner was Graham Rahal in 2008 at age 19. Herta turns 19 on Saturday.

"One race win isn't enough. I want to get another," Herta said.

IndyCar didn't enforce track rules that apply to the Formula One cars the Circuit of the Americas was built for. That led to some wide racing and ultimately the crackup that cost Power his chance to win.

The cars were allowed sweeping runoffs through turns and Rosenqvist and Hinchcliffe touched as they were coming out of a wide run on Turn 19 near pit lane. Two days earlier, Rosenqvist said he likes the open racing without track limits and Power said they should be enforced.

Hunter-Reay and Newgarden said the issue will have to be addressed before next year's race.

"I'll be happy not to see Turn 19 again for a couple of weeks," Hunter-Reay said. "You are rolling the dice a little bit in there."

Rosenqvist had a tough day even before his crash. After an impressive fourth-place finish in his debut at St. Petersburg, the Chip Ganassi Racing driver started fifth and promptly lost three positions at the start. He had a spin midway through the race and then the crash to end his Texas weekend.

After a first and second in the first two races, Newgarden leads the driver's standings with 93 points and Herta is second with 75.

"Colton drove flawlessly. It's big to win your first IndyCar race," Newgarden said. "We have to have podiums when we're not winning races to win the championship."