Jordan's first year in NASCAR a missed layup with Wallace 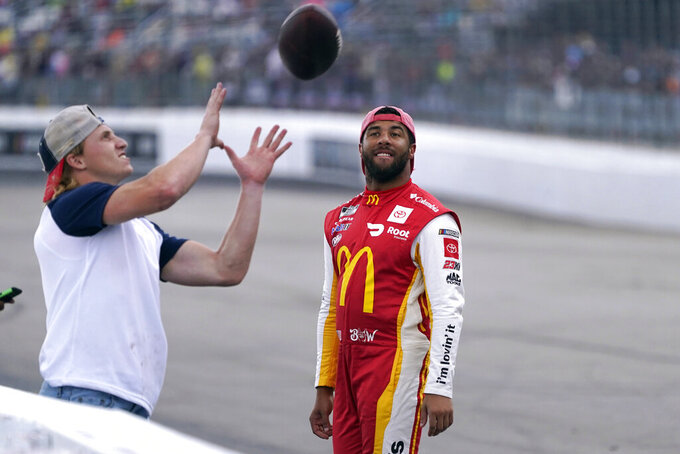 LOUDON, N.H. (AP) — The 23XI Racing team posted a slideshow of the Bubba Wallace firesuit collection and asked fans to comment on their favorite. The designs were from business plucked straight out of Super Bowl ad space: Wallace was dressed by top companies in fast food, fantasy sports and auto insurance.

For a driver who spent most of his NASCAR career scraping together sponsorship deals for underfunded teams, Wallace is flush with Fortune 500 cash. Oh, and boasting Michael Jordan and Denny Hamlin as team owners sure helps the cause.

But deep-pocketed sponsors and a race team seemingly on firm financial footing has done little to help Wallace find success on the track. He has one top-10 finish this season -- he had five last season driving for Richard Petty Motorsports -- led three laps since late April and needs a win over the next four races to earn a playoff berth.

The wins better come in bunches.

Jordan said at NASCAR’s kickoff at Daytona that Wallace should “probably win at least a couple races.”

“It’s about taking the next step at this point,” Hamlin said in New Hampshire. “I think my question to the team is, ‘What’s next? How do we now move that up?’ When you look at data and everything, the car has a ton of potential. How can we optimize Bubba, the entire team’s performance, pit crew and everything, to get better? Because making the step to get in the top 10 consistently, gaining those three to four spots we need to be in the top 10 consistently, that’s a big step.”

Hamlin has modest expectations of getting Wallace those next three to four spots by the end of the season. Wallace’s average finish is 20th. The good news, Jordan showed up in June at Pocono Raceway — with pal Ahmad Rashad — for Wallace’s best result of the season when he placed 14th and fifth in the doubleheader on the tri-oval track.

Wallace had a weekend straight out of a normal sports fan’s fantasy camp when he said he dined with Jordan two nights at Pocono and they watched the NBA playoffs. The dinner conversation, though, didn’t include a report card on Wallace’s first season with 23XI.

“I haven’t talked to him about it,” Wallace said. “That’s more of a him and Denny conversation. I’m just going to keep doing what I’m doing, try to produce the best results. Sunday at Pocono was good, finished top five. I’ll let them have those conversations between themselves.”

Wallace said he would take a “mental reset” during NASCAR’s two-week Olympics break — the schedule resumes Aug. 8 at Watkins Glen — before trying to close NASCAR’s version of the regular season on a playoff push.

“We’ve had the speed for a little bit, but there are certain things that have taken us out or put us behind a little bit,” Wallace said. “It’s just a matter of perseverance and coming back and just trying to get the best results.”

Wallace’s season has largely focused on racing a year after his activism forced NASCAR to ban the Confederate flag. As Wallace’s profile expanded, he raised funds that were tied to him and were able to move with him. Wallace, the only Black full-time driver at NASCAR’s top level, drew a significant amount of personal services agreements with companies such as DoorDash and McDonald’s. Those deals were bundled together and moved with Wallace to 23XI.

While Wallace will always have critics, he’s still a fan favorite at the track, and his newfound mainstream celebrity recently landed him (along with Hamlin and Motley Crue’s Tommy Lee) in a Post Malone video. Wallace, driver Corey LaJoie and New England Patriots return specialist Gunner Olszewski, the honorary pace car driver, tossed around the football with fans during a rain delay in Sunday’s race.

Wallace did admit that no one at 23XI asked for his input on a driver should it land a second charter and expand to a two-driver organization next season. Kurt Busch, the 2004 NASCAR champion, has been the race team’s top target. Busch’s deal was up and Chip Ganassi, his current car owner, sold his NASCAR team to Trackhouse Racing owner Justin Marks. Marks will field one car next season for Daniel Suarez and one for a driver to be named later. Ross Chastain, Busch’s teammate at Ganassi, is a candidate for that second seat.

Busch said he’s “getting close” to a deal that will likely include long-time sponsor Monster Energy.

“Things changed with the announcement of Ganassi selling the team, and my relationship with Monster is important,” Busch said. “I’m trying to balance all that out to figure out what their needs are. I’m a racer and want to drive this Next Gen car and in the right scenario and the right spot.”

Wallace can take small consolation in the fact that Hamlin, a three-time Daytona 500 champion, is also winless through 22 races and the struggle to reach victory lane is real for even the best drivers. He could also look at surprise winners such as Michael McDowell and Aric Almirola as proof that all it takes is one checkered flag to turn around a season.