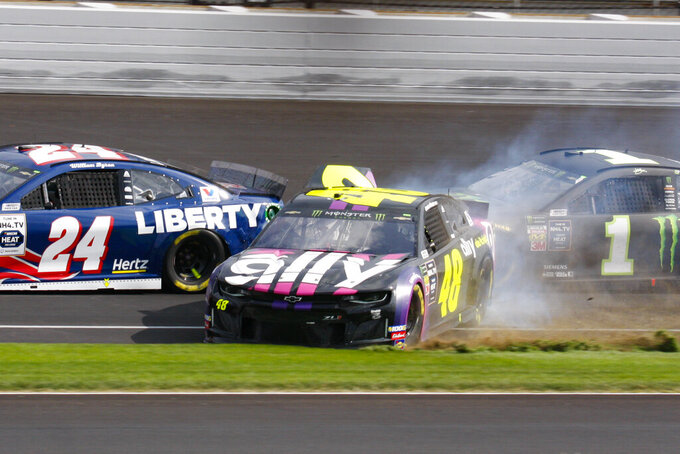 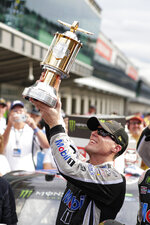 INDIANAPOLIS (AP) — Jimmie Johnson drove through pit road with his rear bumper dangling off the back, already aware of the consequences when he parked the car.

His chance at ending a 27-month victory drought with a record-tying fifth Brickyard 400 win gone. His quest for a record-breaking eighth series put on hold. And his distinction as the only driver to make every NASCAR playoff since it was adopted in 2004 was history, too.

An almost flawless run Sunday by Kevin Harvick ruined any chance Johnson had of executing his win-to-get-in strategy, and when he hit the wall in the second turn with 55 laps to go at Indianapolis Motor Speedway made it official: Johnson would miss the playoff for the first time.

"Damn, oh, what a bummer and a letdown," he said on a Twitter post. "I promise you (my fans) we will finish this season strong and be a threat next year in 2020. I just want to thank you for all being there, for your support. Chasing eight will have to wait till next year."

But for Johnson, it has been a second straight tough season.

His only victory in an exhibition race in February. He endured two major changes in his pit box, the first coming at the end of last season when Hendrick Motorsports announced Johnson's longtime crew chief Chad Knaus would be paired with William Byron. In July, Johnson's team made another change.

Yet, somehow he still entered Sunday two spots and 18 points below the postseason cutline and started the third stage 12 points out.

But with Byron and Johnson running side-by-side off a restart, Johnson's back end spun, sucking him up the track and into the path of Kurt Busch. Both Chevrolets slammed hard into the wall, starting an eight-car melee that ended the streak just that fast.

"I've had 25 races coming into this where I've been worried about it," Johnson said. "I'm not stoked by the situation at all. I am impressed that we have been in 15 consecutive playoffs. I'm not sure anybody else has done that. So, our record doesn't stink. We wish we could have kept it going, but life goes on."

With Johnson out, Clint Bowyer, Harvick's teammate with Stewart-Haas Racing, held onto the 15th spot in the 16-car field. And Ryan Newman, of Roush Fenway Racing, broke a tie for the final spot with Daniel Suarez and put the No. 6 Ford in the playoffs.

Suarez brushed the wall on Lap 12 and then fell four points short of becoming the first Mexican-born driver to qualify for the playoffs in the No. 41 Ford with Haas Automation.

Harvick, meanwhile, had the best car on the 2.5-mile oval this weekend.

He won the pole in the morning, led 118 laps in the afternoon and easily pulled away from Logano over the closing laps for his third win this season.

"This is awesome. I kept telling myself get the baby girl a trophy," Harvick said. "Good weekend to come, so she doesn't know what's going on, just a lot of noise but pretty special."

Defending race winner Brad Keselowski wound up climbing out of the cockpit on his knees after his car and Erik Jones' touched, sending Keselowski sideways into a tire barrier. Keselowski called on speedway officials to consider safety improvements to the 90-degree angle of the wall in hopes of preventing a similar result in the future.

In all, there were six crashes and nine yellow flags for 48 laps in the 160-lap race.

After winning the first three "crown jewels" of the NASCAR season, Joe Gibbs Racing was going for an unprecedented single-season sweep Sunday. Instead, Denny Hamlin had the top finishing Toyota for the team, coming in sixth. Jones was 39th , Kyle Busch was 37th and Martin Truex Jr. wound up 27th.

WHO'S HOT: Harvick heads into the playoffs in the No. 4 spot, recording three wins and seven top-10 finishes in the last seven races. He's also won two poles during that stretch.

UP NEXT: The playoffs begin next Sunday in Las Vegas.