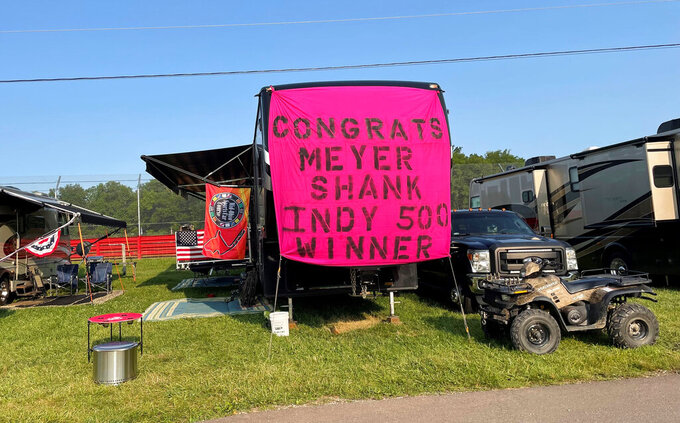 Race fans decorated their camp site at Mid-Ohio Sports Car Course to congratulate local IndyCar owner Michael Shank on winning the Indianapolis 500, Saturday, July 3, 2021 in Lexington, Ohio. Shank’s team is based 50 miles away from the race track in Pataskala and considers Mid-Ohio his home track. Mid-Ohio is hosting IndyCar on the Fourth of July for the first time in track history. (AP Photo/Jenna Fryer)

LEXINGTON, Ohio (AP) — IndyCar will celebrate Independence Day in the middle of Ohio — movies at sunset, fireworks at dark and finally a fantastic season of racing taking its show to the fabled sports car course.

The quaint Mid-Ohio Sports Car Course sits halfway between Cleveland and Columbus, nestled to the west of I-71 in Morrow County, where spectators have an equal chance of passing a six-figure luxury vehicle or a horse and buggy on the two lanes leading to the sprawling 380-acre park.

It isn't true that Mid-Ohio hasn't had a single upgrade since it opened in 1962, but the facility seems frozen in time. Wooden garage stalls, a small riser for victory lane and only 12,000 permanent seats make for a charming host for the Fourth of July party.

This track is where families set up camp for the weekend, kids roam the grounds playing games then catch Saturday night's showing of “Ferris Bueller's Day Off” on a big screen before the fireworks show and finally Sunday's big IndyCar race.

“When I was 6 or 7, I started coming here and was hanging on the fence," said Indianapolis 500 winning team owner Michael Shank, an Ohio native with a shop in Pataskala, 50 miles from the track.

“We're talking sunburned, no shirts on, tube socks, my dad helping his buddies with his cars and the kids running around, my mom chasing us,” Shank continued. “It just started a real love affair, and you know, back then, people drank, like a lot. This place was crazy.”

Shank loves the facility so much he would be willing to buy Mid-Ohio from Green Savoree Racing Promotions, which bought the track in 2011 after Truesports owned it for 29 years. The late Jim Trueman bought Mid-Ohio in 1982 and his family took over its management in 1986 when Trueman died of cancer 11 days after Bobby Rahal won the Indianapolis 500 in a Trueman-owned car.

Kevin Savoree, after riding a golf cart through the paddock to inquir e about a Saturday fight between drivers in Robby Gordon's Stadium Super Trucks Series, said his track was not for sale.

Should he change his mind, Savoree could have plenty of interested parties.

Graham Rahal spent his childhood at the track watching his father race and roaming the grounds on a golf cart, an activity he's resumed this weekend.

“Mid-Ohio is special because of the culture,” said Rahal, who calls Columbus his original home. “It's just a really great place for families to come, camp, enjoy the weekend. It's why I grew up loving the sport.”

Conor Daly, sponsored by the U.S. Air Force, has b een hyping the Fourth of July festival all week.

“Maximum freedom ready to be delivered this weekend,” Daly said on a photo of him standing in his firesuit in front of a stealth bomber.

And that's the contrast of Mid-Ohio, which appears to be idyllic Americana everywhere but on the track.

It's old and slippery and challenging and that could affect the championship race. Alex Palou takes a 28-point lead into Sunday's race, which marks the return of Rinus VeeKay and Felix Rosenqvist after both drivers missed races with injuries.

“It hasn't been paved in 100 years, so it isn't as grippy or as great as maybe it should be,” Rahal said. “But it's one of the purest tracks in the country whether you are on a motorcycle, in an Indy car, here for a track day, everybody loves it.”

Count Palou among those enjoying the trip to Ohio.

Romain Grosjean used an image of a roller-coaster to describe the circuit, while fellow rookie Jimmie Johnson was awed by the elevation changes around the course and the changing grip level throughout a session.

He called it “a sleeper from an experience standpoint” in his preparations for Sunday.

“Wow, what a place,” the seven-time NASCAR champion laughed. “Just a fun, fun track. Not a lot of drivers talked to me about it coming in, and this is really a big treat.”

Josef Newgarden won his third consecutive pole in Saturday qualifying and hopes to finally parlay it into his first win of the season. The pole came on the 50th anniversary of Team Penske's first IndyCar win, with Mark Donohue at Pocono.

The two-time IndyCar champion has led 99 of 125 laps in the last two races but failed to win because of late-race issues. Team Penske is also winless so far this season through nine races.

He believes the 80-lap race around the 13-turn circuit that spans 2.258-miles should be straightforward barring any late cautions that flip the field.

“Depends on the yellows," Newgarden said. "I think yellows are always what flip the script on these things. If it’s green all day, it looks pretty straightforward.”

Colton Herta qualified second for Andretti Autosport and put a pair of American drivers on the front row for the holiday race. Herta was just 0.0031 seconds short of denying Newgarden the pole.

Herta, winner at Mid-Ohio last year in the second race of a doubleheader, marveled at the minuscule margin.

"I don’t know what that would be like, probably very little, maybe like just the length of the P1 sticker,” Herta said.

IndyCar points leader Alex Palou qualified seventh. The Ganassi driver holds a 28-point lead in the standings over Pato O'Ward, who was fastest in morning practice. But O'Ward made an error on his qualifying lap and wound up 20th.