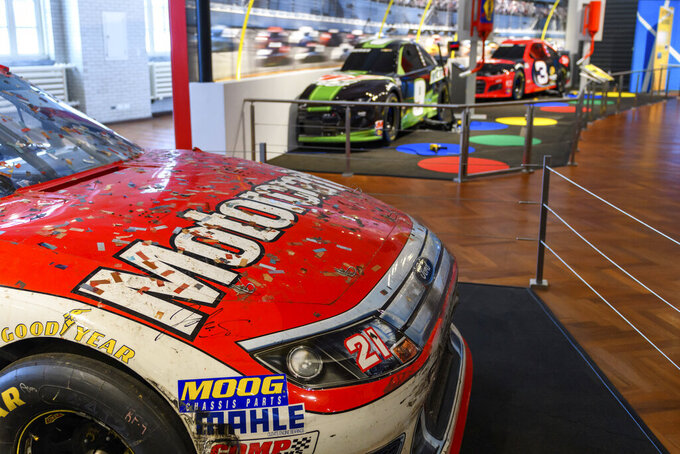 DEARBORN, Mich. (AP) — The first stop on Romain Grosjean’s monthlong tour of the United States with his family was the Henry Ford Museum of American Innovation, where his wife had arranged a tour for the race car driver and their three children.

On the day The Associated Press visited, IndyCar rookie Scott McLaughlin happened to be in the parking lot waiting for the doors to open.

Small wonder the drivers are so interested: The national landmark museum founded in 1929 by the creator of the Model T and father of Ford Motor Co. houses some of the most historic items in U.S. history, including the presidential limousine of John F. Kennedy, the chair used by Abraham Lincoln at Ford’s Theater, the Rosa Parks bus and the Wright Brothers’ bicycle shop.

The museum's newest wing includes a sprawling, interactive “Driven to Win” exhibit that provides a comprehensive look at motorsports in all its forms. It took more than a decade from conception until the doors opened earlier this year as part of a rare collaboration between rivals Ford and General Motors, which is the presenting sponsor of the exhibit.

“Racing is the embodiment of American innovation in the world of sports, but its reach has long stretched beyond the track to our showrooms, our roads and our culture,” Mark Reuss, president of General Motors, told The Associated Press of the exhibit.

“‘Driven To Win’ documents and celebrates those contributions, with an exciting and comprehensive presentation of the past, present and future of motorsports," he said. "I’m proud that GM could help bring it to members and guests of this great museum.”

The permanent exhibit takes visitors on a timeline of motorsports, from soap box derbies to Indy cars, stock cars and dragsters. The Sports Car Performance Center features a full-size clay model of a Ford GT. It’s housed in the same area as the winning car Ford used in the automaker's 2016 return to Le Mans -- a 50th anniversary celebration of Ford's 1-2-3 finish in the 1966 endurance race.

One of the vehicles on display at the entrance of the 24,000 square-foot exhibit is “Sweepstakes,” the 1901 race car Henry Ford used following the failure of Detroit Automobile Co., his first car company. Amid doubts over his ability as both an engineer and businessman, Ford believed a successful race car would restore his credibility. On Oct. 10, 1901, novice racer Ford drove Sweepstakes to a victory over the more established Alexander Winton at a horse racing track in Grosse Pointe, Michigan.

“What was impressive to me is that the exhibit takes you through the timeline of motorsports right from Sweepstakes all the way to today,” Mark Rushbrook, global director of Ford Performance, told AP. “It takes you through all the different racing series and disciplines, and ties in people and technology and how that has been transferred to road cars.”

It is done through interactive displays including simulators, a pit stop challenge and a hand-eye coordination test to measure motor skills and ability to make split-second decisions. A 15-minute short film is shown in a multi-sensory theater and highlights five racers pursuing their dreams.

Trevor Bayne’s 2011 winning Daytona 500 car is on display, as well as the “Yellow Submarine” Chevy-Penske Indy car Rick Mears drove to his third Indianapolis 500 victory in 1988. Among the A.J. Foyt memorabilia is the 1960 Meskowski-Offenhauser Indy Roadster that helped Foyt to his first three Indy car championships in 1960, 1961 and 1963.

“The first time I saw the exhibit it completely exceeded my expectations," Edsel Ford II told AP. Edsel Ford is a Henry Ford board member, longtime executive of the company founded by his great-grandfather and NASCAR Hall of Fame member based on his contributions to motorsports.

“The exhibits are sensational and many of us had seen the drawings, and had numerous meetings about what it was going to look like, but to finally physically see it, it just took my breath away," Ford said. "I find it that overwhelming.”

McLaughlin, a New Zealander and three-time V8 Supercars winner now in his first season of IndyCar driving for Roger Penske, has made a social media series titled “Scott Learns America” in which he visits iconic stops along the racing circuit. The Henry Ford was the Chevrolet driver's stop during IndyCar's doubleheader in Detroit earlier this season.

McLaughlin enjoyed the exhibit although the interactive test of reaction time was a bust — “I was terrible, I was in the bottom half of the day, 64%, pretty shameful,” he said. But the pieces of American history throughout the museum left an indelible mark.

He spent some of his visit in the aviation portion of the museum, where a replica of the 1903 Wright Flyer that Wilbur Wright used for the first heavier-than-air, machine powered flight in the world.

“I actually liked the Wright Brothers stuff and to see how far they actually flew, and I think that resonates to me because we always talk about downforce without completely trying to learn lift,” McLaughlin said. "They didn't even know what downforce was, or they knew what it was and didn't have a name for it, so it was cool that the Wright Brothers created lift for us.

“The whole museum just shows how incredible the history of America is and how much innovation moved the entire world forward.”