Heat is on: Hectic NASCAR tests drained drivers at Homestead 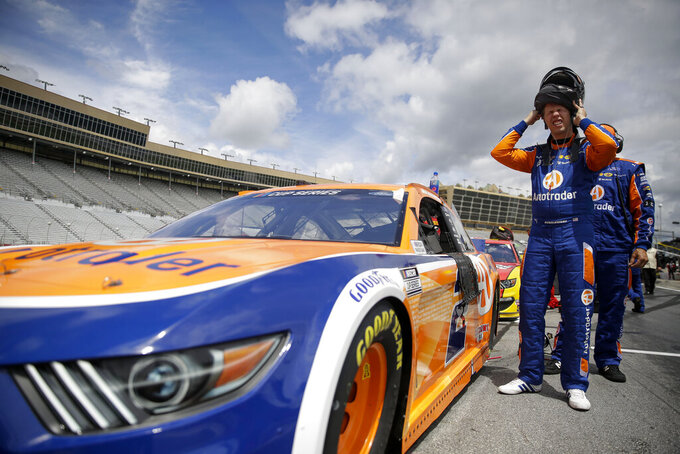 MIAMI (AP) — Some fans will be back. Some flags will be gone.

And after an exhausting few days, NASCAR is about to offer another daunting test at Homestead-Miami Speedway. The Cup Series returns to the track for the third time in eight days Sunday at Homestead, which has previously hosted NASCAR only in November when the heat and humidity are less stifling than in June.

“This is kind of making history for the most grueling few weeks on a driver that I think the Cup level has ever seen,” said Brad Keselowski, who clinched his 2012 NASCAR title at Homestead. “So, you know, with respect to that, it’s the same for everybody. ... I think it’s a great test of will. It’s a great test to the drivers. I think it’s part of what makes these few weeks so compelling, not just as a participant in the sport but as a fan myself.”

He was talking about three races in short order during an already-compressed schedule.

But really, Keselowski’s words could be applied to almost any NASCAR plot point right now.

There’s the physical toll that left some drivers woozy when they finished a steamy race last Sunday at Atlanta, followed by a sticky night of racing at Martinsville on Wednesday where pit stops included gas for the tanks and in many cases ice packs for the cockpits.

There’s also the mental and emotional toll; Bubba Wallace, the only black full-time Cup Series driver, has been in the media spotlight like never before after a week where NASCAR banned the Confederate flag from flying at events, and he adorned his car with the words Black Lives Matter. And several drivers, Wallace included, severed ties with a popular helmet designer this week over social media posts largely related to the flag.

“There’s a lot of support in my corner from all aspects, from sports, from just normal people, people that are wanting to stand up for what’s right,” Wallace said, when asked to describe a week he described as mentally taxing.

Fans — albeit a small number, just 1,000, almost entirely military members — will be back in the stands Sunday, the first time anyone has been on that side of the fence for race day since the pandemic era began.

“Yeah, it’s great to have people back,” driver Alex Bowman said. “It’s been really different. I don’t think you really notice how different it is until postrace. Getting out of the cars to almost silence is just a really odd feeling. ... Hopefully, we put on a great show and the people that are able to be there at that race are making some noise because that awkward silence has been a little weird.”

It’s the 22nd time that NASCAR will run at Homestead, and the first time that it’s happening in any month other than November. Average high temperatures in South Florida are about 8 degrees cooler around that time of year, and forecasters are saying Sunday will be like most days at this time of year at Homestead — temperatures near 90, humidity making it feel worse, with potential for thunderstorms.

The on-track temperature will likely be even higher, and drivers are going to most definitely feel it inside their cars.

And though no championship is on the line Sunday, there will be a distinct feeling of championship nostalgia for seven-time NASCAR titlist Jimmie Johnson, who clinched all those trophies at Homestead.

Track officials at Homestead are renaming one of the facility’s trademarks, the tunnel at Turn 3 that leads drivers into the track, in Johnson’s honor. The announcement this week was made in part to commemorate what could be his final appearance there. Johnson's plan is for this season to be his last as a full-time driver.

“It’s such an incredible honor to have this tunnel renamed for me,” Johnson said. “It’s going to be weird not driving in there with that familiar pit in your stomach, as I have so many years in the past as we were in contention for championships. So many incredible memories were made at this track. I will always remember how special this place is to me.”

Johnson will start ninth Sunday, with Denny Hamlin on the pole followed by Joey Logano, Keselowski, Kyle Busch and Chase Elliott. That’s significant, since six of the last seven winners at Homestead started fifth or better.

The exception there was Johnson, when he started 14th in 2016 and won to clinch his most recent title.