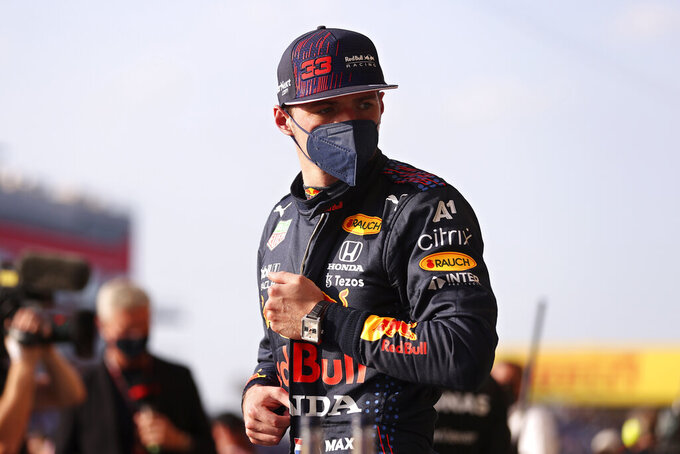 Red Bull driver Max Verstappen of the Netherlands stands in the pit lane at the end of the qualifying session ahead of Sunday's British Formula One Grand Prix, at the Silverstone circuit, in Silverstone, England, Friday, July 16, 2021. (Lars Baron/Pool photo via AP) 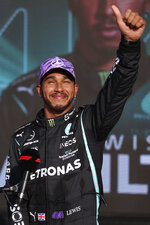 Hamilton was fastest at Silverstone in a qualifying session that set the grid for F1′s historic debut of a sprint race to determine the starting lineup of the British Grand Prix. The seven-time champion thanked the 90,000 in attendance for energizing him through the session.

“It feels like such a long time since we’ve been able to get anywhere near, so this is incredibly special and obviously to do it on your home turf there’s no greater feeling,” Hamilton said.

Hamilton nipped championship leader Max Verstappen in the session but it does not count as a pole position. That will be determined Saturday when F1 experiments with a new format. The three rounds of qualifying Friday night replaced the traditional second practice, and the sprint race is designed to bring more entertainment to the race weekend.

Russell was first to hear the roar of the British supporters when he advanced into the third round of qualifying for the second consecutive race. The fans were on their feet again when the 23-year-old qualified eighth, two spots behind fellow countryman Lando Norris.

Then it was Hamilton’s turn and despite a slight slip in his Mercedes on his flying lap, he shot to the top of the board. When Verstappen finished his lap 0.075 seconds behind Hamilton, the cheering was deafening.

Hamilton climbed from his Mercedes and congratulated teammate Valtteri Bottas, who qualified third, then turned to the grandstands and pumped his arms in achievement.

“This is down to the fans,” he said. “That first lap was great. The second one was looking even better but just lost the back end in that last corner, so my heart was in my mouth as I crossed the line. But I could see the crowd and it was really reminiscent of my first pole here in 2007.”

Hamilton trails Verstappen by 32 points in the standings. The Dutchman takes a three-race winning streak into Sunday.

“We were still quite close, so it’s alright,” the Red Bull driver said. “It’s a bit of a weird feeling to be honest. You do qualifying, you go flat out and actually it doesn’t really mean anything in terms of pole position. I think we have a strong race car we just need to fix a few issues we had in qualifying. I’m quite confident still.”

F1 is calling its tryout of this qualifying format “The Sprint” and it started Friday night with the three rounds and teams mandated to use soft tires. The actual starting lineup will be determined Saturday over 100 kilometers — or 17 laps — and the top three finishers will receive points toward the championship.

Red Bull holds a five-race winning streak ahead of the British GP, but the crowd seems determined to get Hamilton back on top of the podium. His last victory was May 9 at the Spanish GP.

“We’ve been missing this for a whole year. I’m so grateful to see everyone here,” Hamilton said as the fans chanted his name. “To come to the Silverstone grand prix and have a full crowd like this, to see the energy... when I was coming into it, I was hopeful that with the great work we’ve done together in the team plus the energy of the fans would get us there.”

Silverstone has long been a Mercedes stronghold and the team has won seven of the past eight races, six of those victories from Hamilton. Race organizers expect 140,000 fans on Sunday and all in attendance had to provide proof of full vaccination or a negative test taken within 48 hours of arrival.

McLaren announced Thursday that its team head Zak Brown and two other team members had tested positive for the coronavirus. The team said Norris and Daniel Ricciardo were unaffected.