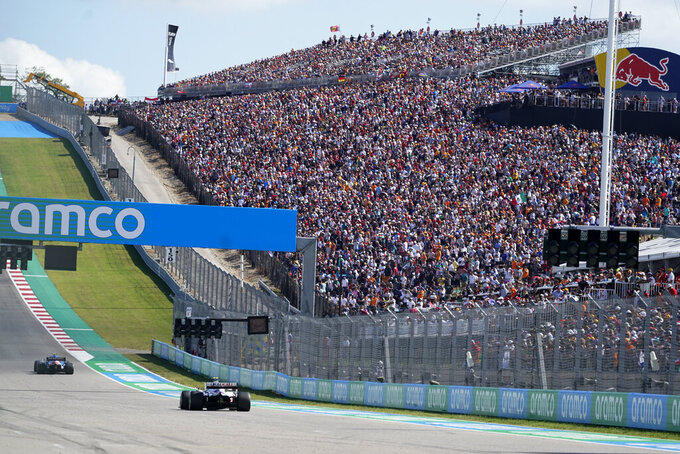 FILE - Fans watch as cars approach turn one during the F1 U.S. Grand Prix auto race at Circuit of the Americas, on Oct. 24, 2021, in Austin, Texas. Formula 1 has announced a new five-year contract with the Circuit of the Americas to keep the United States Grand Prix at the Texas track through 2026. The 2022 U.S. Grand Prix is scheduled for Oct. 23 and has been on F1's official calendar without a formal contract. The track’s original 10-year deal expired with the 2021 race which drew more than 300,000. The contract also keeps at least two F1 races in the U.S. through 2026. The Miami Grand Prix starts a 10-year race contract in May. (AP Photo/Darron Cummings, Pool)

AUSTIN, Texas (AP) — Formula One announced a new five-year contract with the Circuit of the Americas on Friday to keep the United States Grand Prix at the Texas track through 2026.

“It says our first decade went really well and all sides want to see it keep going,” track President Bobby Epstein said of the new contract. “Everyone seems to be excited about the future ... Our commitment in building this place was a long-term commitment to the sport.”

The contract also keeps at least two F1 races in the U.S. through 2026. The Miami Grand Prix starts a 10-year race contract in May. Montreal in June and Mexico City in October round out the series’ four races in North America.

“There’s more than enough demand and interest to support a lot more growth of Formula 1 in the U.S. Being the permanent circuit that is solely dedicated to racing, this will always be the home of the United States Grand Prix,” Epstein said.

F1 president and chief executive Stefano Domenicali hailed Austin as well as the growing popularity of the sport in the U.S.

“Austin is a great city, and the track is a favorite for all the drivers, and we cannot wait to be back in October for more action and entertainment,” he said in the announcement.

The track carved out of rolling scrub land a few miles outside of the Texas capital was the first purpose-built F1 track in the U.S. The original race contract brought the global series back to the U.S. after five years away, and the venue quickly established itself as a favorite among teams and drivers.

Its late-season position on the calendar also had the Austin race playing a major factor in deciding the season championship. Mercedes driver Lewis Hamilton clinched his 2015 and 2019 championships in Austin.

The Texas race has been supported by more than $200 million in public funds. State law allows race organizers to apply from the Texas Major Events Reimbursement Program to help pay F1's annual rights fee. That fee was $35 million in 2021, according to state records.

Epstein said he didn't ask for a 10-year deal like his original one, but said he believes the Austin track could host F1 for another 25 years.

“This will remain and only get stronger," Epstein said. "We have tradition now.”

The track also recently finished a project to resurface about 70 percent of the 3.4-mile (5.5 kilometers) race course. The MotoGP motorcycle series has raced the Grand Prix of the Americas there since 2013, but riders have complained for years that bumps in the track caused by soft soil underneath made it dangerous.

The April 10 race is the last in the current contract with MotoGP. Epstein said the series likely wouldn't come back if the improvements weren't made, and he's still in negotiations for a new deal to keep MotoGP's only U.S. race.

“We wouldn't have done the repaving to the extent that we did if we didn’t think we were going to bring MotoGP back,” he said. “We’re kind of excited for them to come ride it an enjoy it because it’s been several years.”