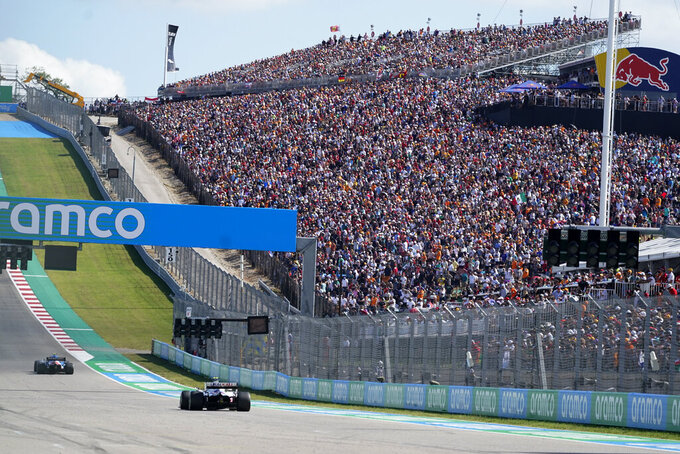 KANSAS CITY, Kan. (AP) — NASCAR, the longtime king of U.S. motorsports, has never had to worry about Formula One, the popular globetrotting series that has never quite grabbed hold of Americans.

Then came “Drive to Survive” on Netflix, an F1 docuseries that for three seasons has given viewers a behind-the-velvet-rope look at the international superstars in Formula One, their glamorous lives, the cutthroat competition and the alleged cattiness of Red Bull boss Christian Horner.

Perhaps the show is embellished — current championship leader Max Verstappen told The Associated Press producers “faked a lot of rivalries that don't really exist” and he's not participating this season — but it didn't seem to matter when F1 rolled into Austin, Texas last week. The series' first trip to the U.S. in two years because of the pandemic felt like the second coming of The Beatles.

Not even NASCAR would deny it was second fiddle on Sunday.

Nobody needed to see the massive crowds at the U.S. Grand Prix to know it: one look at NASCAR grandstands the last two playoff races was confirmation enough.

Meghan Thee Stallion, Rory McIlroy, Serena Williams and Shaquille O’Neal were among the 140,000 at the Circuit of the Americas on Sunday watching 24-year-old Verstappen beat seven-time world champion Lewis Hamilton for the eighth time this season. At Kansas Speedway around the same time, two fans dressed as Ricky Bobby and Cal Naughton Jr. from “Talladega Nights” aimlessly walked through the empty fan zone during the pre-race prayer.

Denny Hamlin raised the alarm last week after NASCAR raced in front of a sparse crowd at Texas Motor Speedway, with the three-time Daytona 500 winner calling the turnout “a big disappointment" just before all the buzz about "the biggest crowd in history showing up for COTA F1."

Hamlin, in fact, says he's watching more F1 this season than ever before. He picked the right time — the Verstappen and Hamilton title fight is one of the most thrilling in years — but accurately noted F1 races are essentially a battle between Red Bull and Mercedes with other winners a rarity.

“It’s crazy because you know, you’ve got probably a 90% chance of picking which two guys are going to win. Two people can win, two teams can win. There is not much side-by-side racing, as compared to NASCAR, but yet fans and media love it," Hamlin said. “Our racing in NASCAR, it’s head and shoulders above anything going right now. Why can’t we get people to turn out? There is some kind of disconnect that’s going on that’s not making this deal work.”

There's something to that. American race fans have been drawn to crashes and the bumping and banging of NASCAR, but purists prefer open-wheel racing and its sophistication, reliance on technology and emphasis on strategy over wheel-to-wheel competition.

But there's no denying something's missing — and NASCAR teams know it.

Hamlin and Michael Jordan, his co-owner of first-year Cup Series team 23XI Racing, met with NASCAR President Steve Phelps and the managing partner of the Charlotte Hornets’ Sports & Entertainment at the Hornets’ opener to discuss what the sport can do differently. Hamlin said Phelps and other NASCAR executives have been attending sporting events across the country in an effort to see how the series can improve its at-the-track experience.

The season-opening Daytona 500 typically meets the standards of a high-energy event. The rest of the schedule? Most of it just feels like 35 groundhog days spanning February to November.

Hamlin was among several drivers who put the blame squarely on race promoters, alleging most rely on the $5.3 billion earmarked for track owners as part of the $8.2 billion television package.

“It should be a big thing when we come to town,” Hamlin said. “I think the tracks just have not been held to a high enough standard when it comes to promotion. I think they’ve just really dropped the ball and a lot of it is because (attendance is) just such a small part of the revenue and it’s not a needle-mover for them.”

Kyle Busch said a friend of 10 years who lives six minutes from Texas Motor Speedway had no idea NASCAR was in town racing two weekends ago. He quipped that “make promoters great again, that’s kind of our go-to line.”

“I feel like people are at COTA because (Formula One) only comes here once a year, and you know, we’ve got 38 shows and so we’re redundant,” he said.

The differences run much deeper beyond the racing and the marketing.

The F1 broadcast is both commercial-free and aired without cornpone commentary or slapstick sidebars. Both races started at the same time on Sunday, though a lightning delay in Kansas meant the NASCAR race wrapped just about three hours after the green flag: the much-shorter F1 race ended just minutes after NASCAR completed the first of its three stages.

“They have a super interesting dynamic with how their TV broadcasts work,” Elliott said. “They talk about the right things on their TV broadcasts and the racing has been really good. Whatever started that process of those right decisions and maybe luck of the draw of having some great racing this year with some extra eyeballs kind of at the same time, it's the right sequence of events for them and they’ve got a good thing going.”

All 20 of the F1 drivers also have mandatory news conferences, increasing their exposure and seeming accessibility. Last week, a “fan question” for each set of drivers came via pre-recorded video from children who asked everything from “what weapon would you choose in a zombie apocalypse” to “what feature from the Batmobile would you put on your F1 car.”

It's not that NASCAR drivers won't entertain such questions — all eight playoff contenders, plus Corey LaJoie and Justin Haley answered the zombie apocalypse question Sunday morning — but NASCAR has cut its required availability to 15-minute pre-race sessions and when drivers show up, some seem as if they'd rather be undergoing a root canal than answering questions.

The pandemic has curtailed much of the pomp and circumstance at NASCAR events and the low vaccination rate throughout the garage has forced series leadership to reduce interactions that casual fans had come to expect at a race.

And, there's nothing on track until the race. At COTA, IndyCar star Pato O'Ward turned demonstration laps, sliding all over the track in a McLaren, and Daniel Ricciardo drove the late Dale Earnhardt's 1984 No. 3 Wrangler Chevrolet during downtime. Billy Joel played an infield concert and Shaq DJ'd a postrace party.

Brad Keselowski, who will become part owner next season at Roush Fenway Racing, said he'd love to meet fans and sign autographs each week, anything to generate buzz. He said he won't because tracks charge teams and drivers anywhere from $20,000 to $40,000 to park a souvenir trailer on the property. He called that absurd.

“When I first started coming to the races before the broadcast was so important, it was more about the events... you could go to the midway and it felt like you were at a fair. It's not that way anymore," he said. “I’m not going to pay 40 grand to sign autographs for you to collect the ticket money. That makes no sense. Until those things change, there’s at least, from my side, a complete demotivation to do those things."

NASCAR has two races remaining this season, which concludes Nov. 7 with a winner-take-all championship finale at Phoenix Raceway. The event was announced as a sellout on Oct. 3, the earliest Phoenix has reached full capacity since it began hosting NASCAR in 1988.

It won't have the glitz and glamour of an F1 weekend, but NASCAR is unlikely to mimic those events anyway, not when it races at many venues twice a year. NASCAR will open 2022 with an exhibition at the Los Angeles Memorial Coliseum and has already made significant changes to its once staid schedule. More road courses have been added, Bristol was covered in dirt and there's talk of a potential street race someday in downtown Chicago.

NASCAR leadership seems aware of its shortcomings and hopes the pandemic-delayed introduction of a new car next year will also improve the on-track competition. But the time to start thinking outside the box is long overdue.