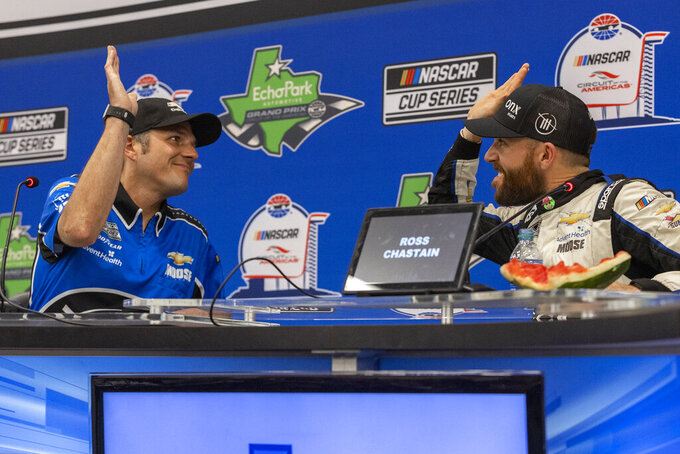 Last race: Ross Chastain prevailed in a four lead-change, two-lap final overtime run on the Circuit of the Americas in Texas for his first Cup Series victory.

Fast facts: Chastain became the sixth winner in as many races and they stretch from fourth (Alex Bowman) to 16th (defending champion Kyle Larson) in the point standings. ... Chastain is fifth in points and leads all drivers with four top-five finishes and shares the series lead with points leader Elliott with four top-10s. ... Perennial contender Denny Hamlin remains mired in 22nd place, has no top-10 finishes and has been running at the finish just three times in six races as the series heads to his home track. Joe Gibbs Racing teammate Martin Truex Jr. is seventh in points and teammate Kyle Busch is 11th.

Last year: Noah Gragson won in September from the No. 3 starting spot in the only race at Richmond because of pandemic concerns.

Last race: A.J. Allmendinger won for the 11th time in the series, and the seventh time on a road course, at Circuit of the Americas in Texas.

Fast facts: Allmendiner moved within a point of leader Gragson in the standings after six races. ... Gragson leads all drivers with five top-five finishes. No one else has more than three. ... Ty Gibbs is third in points, but his only two top-five finishes were his series-best two victories. ... Cole Custer is not in the championship race, but has top-five finishes in both of his starts in the series.