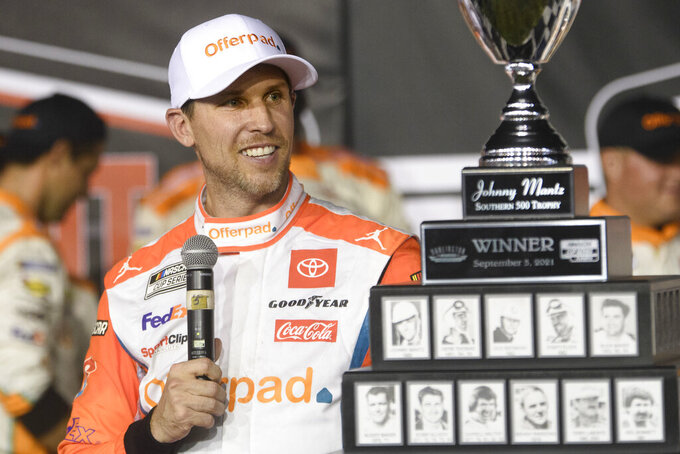 Last race: Denny Hamlin held off regular-season champion Kyle Larson in a late green-flag run at Darlington to earn his first victory of the season.

Fast facts: Hamlin's victory moved him from seventh to second in points, 34 behind Larson. Martin Truex Jr. is third, 44 back. Kurt Busch is 54 back and Ryan Blaney is 58 behind. ... Kevin Harvick (seventh) and Tyler Reddick (12th) are the only winless drivers in the field of 16. ... Larson led 156 of the 367 laps to Hamlin’s 146. Hamlin won the first stage and Larson won the second.

Last race: Noah Gragson grabbed the lead from Daniel Hemric in overtime at Darlington and held it the rest of the way to clinch a playoff berth.

Fast facts: A.J. Allmendinger's points lead over defending series champion Austin Cindric shrunk from 17 points to 1 point. Justin Allgaier is third, 116 points behind. ... Allmendinger and Cindric share the lead with 15 top-five finishes through 24 races. ... Allmendinger has finished on the lead lap in 23 of 24 races. ... Only two races remain before the field of 12 playoff contenders is set. ... Dale Earnhardt Jr. will start 30th in his first race of the season.

Last race: Sheldon Creed completed a sweep of the season's two races at Darlington — and won his second straight race overall — in the first race of the playoffs.

Last year: Pierre Gasly won after starting 10th, the deepest spot on the starting grid for any winner all season.

Fast facts: Verstappen's victory was his series-high seventh of the season and the 17th of his career. ... Hamilton finished second and fell three points behind in the championship points race. ... Hamilton's Mercedes teammate, Valtteri Bottas, finished third. Bottas announced this week that he is leaving Mercedes at the end of the season and replacing Kimi Raikkonen at Alfa Romeo.

Last race: Josef Newgarden won after starting third at World Wide Technology Raceway outside St. Louis for his second victory of the season.

Fast facts: Newgarden is one of four two-time winners through 13 races. The others are Pato O'Ward, Alex Palou and Marcus Ericsson. ... O'Ward leads Palou by 10 points in the standings. Newgarden is 22 points back, Scott Dixon is 43 behind and Ericsson is 60 off the lead with three races remaining.