Rossi salvages top finish in another tough 500 for Andretti 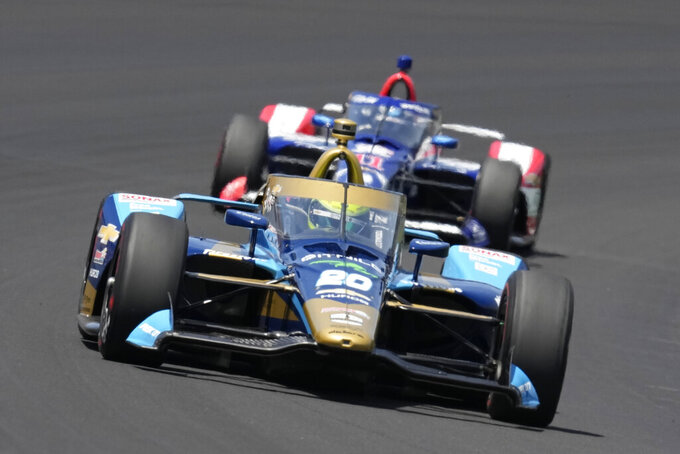 Conor Daly drives into the first turn during the Indianapolis 500 auto race at Indianapolis Motor Speedway, Sunday, May 29, 2022, in Indianapolis. (AP Photo/Darron Cummings)

Otherwise, it was another miserable — and perhaps costly — Indianapolis 500 for Michael Andretti, who had five cars start Sunday. Four finished 19th or worse, but Rossi drove from 20th to an Andretti-best fifth.

Not good enough for the team owner, who conceded the IndyCar title with 11 races remaining this season.

“Alex did a great job. He saved us from a disaster," Andretti told The Associated Press. “It was just not a great month and the worst part is that the championship has pretty much fallen out of reach.”

It came after May started with such promise for the organization. Colton Herta, the emerging star from California, won a rain-soaked IndyCar Grand Prix two weeks ago. But nothing went right since, least of all in a double-points race.

All five Andretti cars struggled to find speed. Herta blew an engine in qualifying and wrecked his car on Carb Day, and Marco Andretti also had a poor qualifying run. Only 500 rookie Romain Grosjean made the 12-car pole shootout.

Sunday's results added to the team's woes. Herta said IndyCar officials parked his car because he was running too slow; Andretti said there was an issue with the throttle. That wasn't all.

“We were so loose, the loosest I’ve been on an oval like this, so it was frustrating," said Herta, who settled for 30th. "Now all you can think about is what if (the Carb Day crash) didn't happen.”

Grosjean was one of three drivers who spun going through the track's tricky second turn, hitting the outside wall about halfway through the race. He finished 31st.

Marco Andretti suddenly found himself out front for three laps late when other drivers pitted — the first ones he's led at Indy since 2014 — but settled for 22nd after also needing a pit stop. And rookie Devlin DeFrancesco wound up 19th.

But Rossi, the 2016 Indy winner, nearly executed the plan perfectly.

“When you get close, you start hoping and dreaming of bigger things but that wasn't meant to be today," Rossi said.

“Nobody knows that better than me,” Michael Andretti said.

Team Penske just couldn't get him back to victory lane.

After putting only one driver, Australian Will Power, in last weekend's pole shootout, none of the team's three drivers finished in the top 10.

Josef Newgarden led the charge in 13th with Power sliding from 11th to 16th. Penske's most competitive car, Scott McLaughlin's No. 3 Chevrolet, wound up 29th after the New Zealander slammed into the third turn wall, slid down the track, across the grass and hit the fourth turn wall twice with 48 laps to go.

Despite running strong at Indy the last two Mays and qualifying third for the 500, 21-year-old Dutch driver Rinus Veekay was the first driver out when he hit the second turn wall on Lap 39.

“The car got loose, and once that happens, you can't do anything,” the Ed Carpenter Racing driver said. “Just a bummer really. I thought I had a good shot at it. It just caught me off guard.”

Callum Ilott, the 23-year-old rookie from England, also crashed in the second turn in what looked very similar to VeeKay's spin. Ilott, who drives the No. 77 Chevy for Juncos Hollinger Racing, hurt his right hand but was not seriously injured.

Grosjean and seven-time Cup champion Jimmie Johnson might have been the best-known names of the seven-rookie field, but it was 20-year-old David Malukas who was the top finisher.

Malukas qualified 13th in Dale Coyne's No. 18 car, starting 13th and drove a clean race, completing all 200 laps to take 16th — one spot ahead of Kyle Kirkwood, the rookie with A.J. Foyt Enterprises.

“It was very cool," said Malukas, who raced in a backup car following a crash in practice Friday. “They told me to go 95% until the end so that's what I did. But I realize now this track picks its winner. In a three-hour race, there are so many opportunities for things to happen and the field is so good that if you make a little mistake, you lose five positions.”

For the second straight year, Conor Daly found himself in contention late.

The Indianapolis native who drives for Ed Carpenter and is the stepson of speedway president Doug Boles drove from 18th to sixth thanks to some nifty moves and a sound strategy.

“There was a lot of smart work on our side and the car was quick,” he said. “I thought our balance was better than others and we were able to overtake some people in the pits. We got one lucky yellow that vaulted us past some people. We just lost a little bit on that last pit stop.”