Racing greats Alonso and Johnson drive together in Abu Dhabi 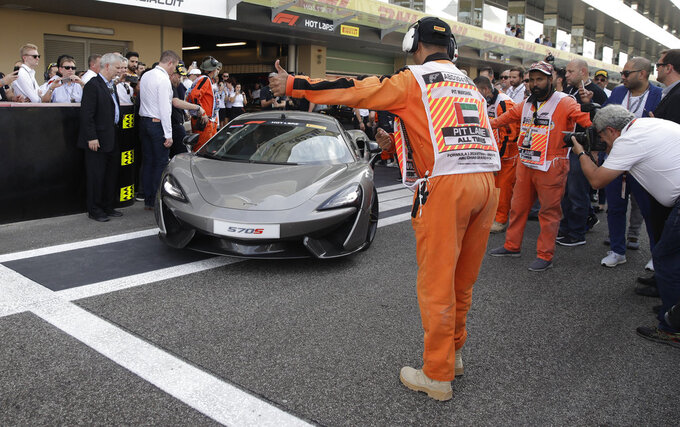 Alonso took the wheel of the McLaren 570S car, with Johnson for once in the passenger seat, as they completed a few laps around Yas Marina circuit.

"Fernando was very, very upset he couldn't turn off the (stability) assistance from the car and the traction control," Johnson joked afterward at the McLaren motorhome. "So we spent two laps trying to figure out how to push the buttons to turn that off. As soon as we got that off, we spun out."

On Monday, they will swap race cars in Bahrain for an event they have been teasing about on their social media accounts in recent weeks.

The 43-year-old Johnson arrived in Abu Dhabi from the McLaren headquarters in Woking, England, where he got a seat fitting and time in the McLaren simulator.

"It was so impressive, the architecture and the landscaping. I was there on a cool morning with the fog off the lake, the modernism of the building and the cars sitting there in the lobby," Johnson said. "Simulators are very good for the flow of the race track and (knowing) where the pit lane is. I was able to get that out of the way."

After the last race of Alonso's long F1 career on Sunday, he will try his hand at what Johnson does so well.

"Our car (is from 2018) yes. Sadly, the restrictions for Formula One (means) it is a five-year-old car, but I hear it's a V8 (engine)," Johnson said, comparing the two cars being used. "I miss that sound, which I know everybody does. So I'm excited about that."

The race swap idea was formed during a chance January meeting in a waiting area at the Charlotte Convention Center. Johnson was at NASCAR's preseason media availability, and Alonso was brought to the event by IMSA to promote the Rolex 24 Hours of Daytona.

"His presence in America has a huge effect on American racing, on Formula One racing, and on motorsports in general," Johnson said of Alonso. "Just the excitement value he brings to racing and the way he's portrayed in the U.S."

The 37-year-old Spaniard has grown more interested in pursuing other racing interests and is aiming to win motorsport's Triple Crown of the 24 Hours Le Mans, the Indianapolis 500, and the Monaco GP.

Last year, Alonso skipped the Monaco GP, which he has won twice, to compete at the Indy 500. He led for 27 laps before his engine blew. In June, Alonso won Le Mans at the first attempt.

"Anybody in motorsports appreciates other forms of racing. It's maybe not in your backyard ... but we all watch and enjoy it," Johnson said. "Fernando's put on many great battles over the years."

Johnson said he would take the opportunity of racing in F1 "in a heartbeat" but knows that's far from realistic.

"The last single-seater I drove was probably in 1996, maybe '95 even," he said. "So it would be crazy to think I could come in and just immediately be there."

His more realistic goal is attempting to win an eighth NASCAR title. He is tied for the record with Richard Petty and Dale Earnhardt.

"The competitor in me wants to do it. I want to be the best," Johnson said. "But I can't believe I'm sitting here with seven as it is. It's been a pretty crazy ride."