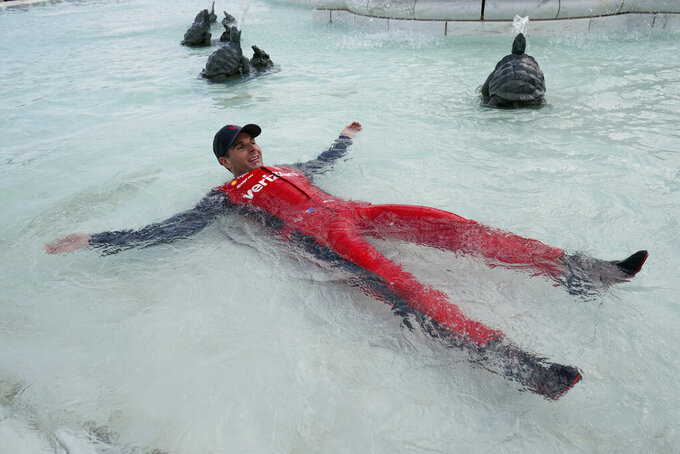 DETROIT (AP) — Will Power had victory within reach on Belle Isle a year ago until a late red-flag led to an electrical malfunction that ruined his race.

In his mind, the Detroit Grand Prix owed him one.

And when Power gets his mind set on something, there's no holding him back.

Power charged from 16th to the win Sunday to close out the Belle Isle era with a Team Penske victory that returned the Australian to the IndyCar points lead.

Power passed teammate and pole-sitter Josef Newgarden on lap 14 and never looked back, leading 55 of the 70 laps as he found himself in “the zone.”

“It’s hard to get to that place. I used to be there a lot often when I was younger,” said the 41-year-old. “It’s just one of those zones where everything’s clicking so well, you’re 100% in the middle, it’s that flow state. Hard to explain. But I would get in that state for qualifying often, pump out some pretty ridiculous laps. That was the race for me. In a really good spot.”

Power held off Alexander Rossi in the closing laps — extending Rossi's losing streak to nearly three years — for his first win of the season. All three Team Penske drivers have a win through seven IndyCar races this season.

Power controlled the first race of the Belle Isle doubleheader a year ago until a late caution brought out the red, and then his car couldn't start for the finish. He went from potential victory to a 20th-place finish and has not let it go in the year since.

This year's Belle Isle finale was only one IndyCar race. The event will return to its original downtown street course layout in 2023.

The Power victory was a celebration for Chevrolet, the race sponsor, and its headquarters loom over the Belle Isle course. It gave Chevrolet its 100th win since it returned to IndyCar competition in 2012, and Power said he owns 26 of those victories — including an Indianapolis 500 win and an IndyCar championship.

And it was, of course, a celebration for team owner Roger Penske, a longtime Detroit resident and promoter of the race. Team Penske picked up a second victory less than 90 minutes later when Joey Logano won the inaugural NASCAR Cup race in St. Louis.

For Power, the 41st win of his career moved him within one of Michael Andretti for fourth place.

Rossi, who this week confirmed he's moving to Arrow McLaren SP next season, used a three-stop strategy to rally from his 11th-place starting position and drive through the field to contend for the win. But Power, who started 16th, had already taken control of the race and Rossi could only try to close the gap.

Although Rossi made it close as both drivers were dealing with traffic, Power beat him to the finish by 1.0027-seconds. Power won for the third time in Detroit.

“I think one more lap would have been really interesting,” said Rossi. “We're finally just executing at our potential.”

Scott Dixon was third for Chip Ganassi Racing and followed by pole-sitter Josef Newgarden of Penske.

Kyle Kirkwood was looking for a huge double-duty weekend in Detroit and was on pace to achieve it — he was fastest in the first IndyCar practice — until he injured his right hand in a Saturday morning crash.

Despite the injury, Kirkwood was part of the winning IMSA sports car GTD entry for Vasser Sullivan Racing in Saturday afternoon's race. But there is no power steering in IndyCar and A.J. Foyt Racing had to make multiple changes for the rookie to be able to handle the car.

Kirkwood was managing it Sunday until he lost control of his car on cold tires to bring his weekend to an early end.

“It's super disappointing,” Kirkwood said. “It's all on me, just a big mistake on cold tires.”

Kirkwood this week was announced as the replacement for Rossi next season at Andretti Autosport.

An uninspiring start to the season turned worse for Graham Rahal when driver error knocked him out at Detroit just two laps into the race. Rahal finished last in the 26-driver field and is coming off a 14th-place finish in last week's Indianapolis 500.

He said he bottomed out in the second turn in what Rahal deemed “an uncharacteristic mistake.”

“Had a big moment and brushed the wall,” Rahal said. “This is an all-time low for us as a team and for me to make mistakes like that isn’t helping. Need to hit the reset button.”

IndyCar races Sunday at Road America in Wisconsin. Palou won the race a year ago, and Road America was site of Rossi's last victory back in 2019.