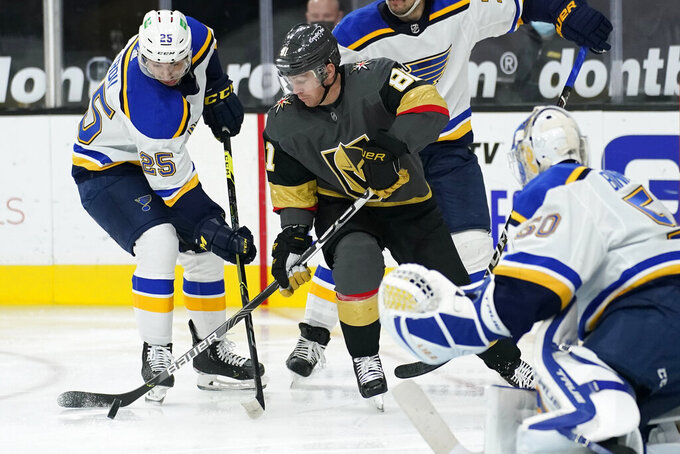 The Calgary Flames are temporarily relocating their American Hockey League affiliate from California to north of the border due to cross-border travel restrictions as a result of COVID-19.

The team announced Thursday that the Stockton Heat will play this season in Calgary's Scotiabank Saddledome. That will give the Flames easier access to their players during the pandemic. The seven Canadian NHL teams are not crossing the border during the regular season this year.

The Heat will join the Belleville Senators (Ottawa), Laval Rocket (Montreal), Manitoba Moose (Winnipeg) and Toronto Marlies (Toronto) in the Canadian Division. The league says the division schedule will be released in the coming days.

Georgia State's women’s basketball team has postponed a make-up game against Coastal Carolina on Feb. 2 because of COVID-19 protocols within the Chanticleers’ program.

The teams were initially set to play in Atlanta in early January, but both games were postponed because of the coronavirus. One of the contests was supposed to be played next week at the GSU Sports Arena, but now it has been called off. It’s not known if another new date can be found.

Georgia State also announced a pair of make-ups against Sun Belt Conference rival Troy — one each for the men's and women’s teams — on Feb. 16. ___

As an extra precaution, Rice is delaying its upcoming home-and-home men’s basketball series with North Texas by one day.

The first game will now be played Friday afternoon and the second one on Sunday. The games were originally scheduled for Thursday and Saturday.

Friday’s game is at Rice and will not be open to the public in accordance with the university’s COVID-19 mitigation policies.

Rice officials are working on potential seating layouts to accommodate some level of attendance for future games and will announce any plans to season ticket holders and the public when a decision is reached.

The National Women’s Hockey League’s shortened two-week season and playoffs is down to five teams after the Metropolitan Riveters withdrew from competition after several members tested positive for COVID-19.

The development comes a day after the Riveters were not allowed to play their game against the Buffalo Beauts.

The league also revised its schedule by postponing its remaining game on Thursday and moving it to Saturday. This provides teams a two-day break as there were no games scheduled for Friday.

The league did not release a revised schedule or playoff format for a truncated season, which is being played at Lake Placid, New York.

Teams were initially scheduled to face each other once in the regular-season round, which opened last weekend. Teams were then to be seeded based on standings and play a two-game, round-robin tournament. The four best teams would then advance to the semifinals on Feb. 4, followed by the championship game the next day.

The RBC Heritage in mid-April will have a limited number of fans and sponsor tents due to the coronavirus pandemic.

The PGA tournament announced Thursday that face coverings will be mandatory for attendance, while skyboxes and private hospitality venues that usually surround Harbour Town Golf Links will be replaced with open-air villages and concession areas. The event will take place from April 15-18.

Last year, the RBC Heritage was canceled before the PGA Tour chose to play it in June in one of the first tournaments after restarting the schedule. In 2019, the event attracted 135,000 spectators to Hilton Head Island. Event organizers said they’ve worked with officials from Hilton Head, the state of South Carolina, and the PGA Tour on health and safety protocols for the tournament.

Atlanta Motor Speedway will allow a limited number of fans to camp on the infield during its NASCAR weekend March 20-21.

The speedway in suburban Hampton plans to utilize the Flock Brothers campground, located inside turns 1 and 2 of the 1.54-mile oval.

The plan calls for campers to be backed into their spaces, which have been expanded and should ensure recommended social distancing. Only RVs and campers with self-contained restrooms will be permitted. The shower facilities and restrooms at the campground will not be open race weekend.

The remainder of the infield is to be reserved for NASCAR industry and event staff, and a reduced number of fans will be permitted in the grandstands.

Under NASCAR’s revamped schedule, Atlanta Motor Speedway is again hosting two NASCAR weekends in 2021 after being limited to one for the past decade. The Cup series returns to the track in July.

The Vegas Golden Knights’ game against the St. Louis Blues scheduled for Thursday night has been postponed.

The NHL says a Vegas player and another coach have entered COVID-19 protocol. That could mean a positive test, potential exposure or something else.

The NHL says the Golden Knights’ training facilities are closed until further notice. A decision on their upcoming games will be made in the next 24-48 hours.

Vegas is next scheduled to face the San Jose Sharks next Tuesday and Thursday in Glendale, Arizona.

The Golden Knights are the third team to have virus problems force a postponement, following Dallas and Carolina. It’s the first postponement outside the league’s realigned Central Division.

The soccer federation of Cyprus says it’s doling out emergency funding to struggling second- and third-division teams to help them cope with additional pandemic-related costs.

The two divisions have been idle after the government earlier this month ordered a halt to all lower-division games as part of a three-week, nationwide lockdown to curb an increase in coronavirus infections. Only first-division teams have been permitted to play through the lockdown, which allowed them to collect on TV rights contracts. They also have been granted an undisclosed sum from the CFA.

Some lower-division clubs are in serious financial trouble, especially in the second division because of their numerous contracts with professional players.

San Antonio coach Gregg Popovich has gotten the COVID-19 vaccine, going public with that announcement Thursday to encourage others to receive the shot when they have the opportunity.

Popovich released the news on his 72nd birthday. He made the announcement through the NBA in the form of a video just as Kareem Abdul-Jabbar, the league’s all-time scoring leader, did last week. Both are well within the age guidelines established by the Centers for Disease Control and Prevention surrounding vaccine eligibility.

“Sciencewise, it’s a no brainer. It’s the right thing to do so we can all get on track again,” Popovich said in the video.

The video also shows Popovich receiving the vaccine. “I didn’t feel it,” he told the health care worker who gave him the shot.

The CDC guidelines suggest that priority for receiving the vaccine should go to health care personnel, those living in long-term care facilities, front-line essential workers, those over the age of 65 and people “with underlying medical conditions” that increase their vulnerability to COVID-19.