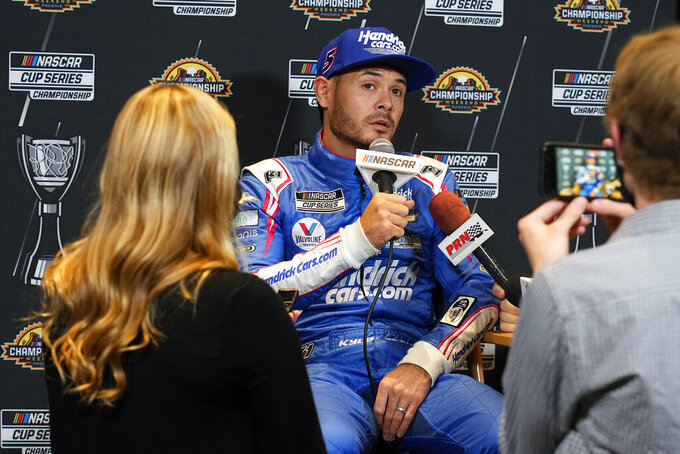 AVONDALE, Ariz. (AP) — Kyle Larson was the best of NASCAR’s four title contenders Friday in the final practice before the championship is decided in the season finale at Phoenix Raceway.

Larson turned in the top speed of 135.293 mph among the four finalists and was second-fastest overall in 10-lap average at 131.935 in the No. 5 Chevrolet. Larson also set the fastest five-lap average.

The championship showdown Sunday at the mile track comes down to Hendrick Motorsports vs. Joe Gibbs Racing. Larson and reigning Cup champion Chase Elliott represent Hendrick, the winningest team in NASCAR history. Martin Truex Jr. and Hamlin will race for the checkered flag for JGR.

The starting order for the championship race will be set at Saturday's qualifying session.

Phoenix is sold out and fans packed the garage area trying to catch a glimpse of the drivers. Elliott worked his way down a line of autograph seekers, a contrast from a year earlier when the championship race had limited capacity because of the pandemic. Phoenix held its second straight championship race after it spent 18 seasons at Homestead-Miami Speedway.

“I think the move from Miami to here was an important one after 20 years. I think thus far it’s worked out very well,” NASCAR President Steve Phelps said. “The community here has embraced us. I think you see that. We’ve been embraced by this community. Would we be embraced by other communities? I suggest we probably would be.”

Phelps did not rule out moving the championship site around on a rotation basis.

Elliott's victory a year ago at Phoenix clinched NASCAR's most popular driver's first career Cup championship. Truex was the 2017 champion, while Hamlin and Larson are in search of their first Cup titles. Truex won the spring Phoenix race.

Hamlin led the Cup standings for 22 consecutive weeks but lost the regular-season championship to Larson over the final three weeks. He's long been recognized alongside Mark Martin as the greatest NASCAR driver to never win a championship and finished last in the final four in 2019 and 2020.

Hamlin, who turns 41 later this month, said this week he was comfortable with his potential legacy in NASCAR of being one of the best drivers never to have won a championship and has found a way to thrive under chaos.

“I think he believes in the race team, he believes in the process, the procedure and he knows that he has to show up,” Hamlin's third-year crew chief Chris Gabehart said Friday. “I won't say it's always been the case. I'll leave that to other people who have been around him longer than me. But I can tell you, he has definitely shown up the last 107 races, now. I expect this one to be no different.”

Larson returned from a suspension last season for using a racial slur and won a series-high nine races. He had only six career wins in his previous six full seasons.

“It hasn’t so far felt any different. I haven’t had any butterflies this week, which has been good,” Larson said this week. “I didn’t know how I would feel leading into this week’s events. I think I’m just really excited for the opportunity. Hopefully, we can take advantage of the opportunity and win my first championship."

Truex has four wins and Elliott and Hamlin both won twice this season.

The pandemic forced NASCAR to streamline its schedule and most race weekends in 2020 were turned into one-day events. That continued in 2021 with only Phoenix and seven other race weekends -- mostly new tracks and Daytona 500 weekend — having scheduled practice sessions.

Brad Keselowski had the fastest practice lap of the session at 135.384 mph as he enters his final race for Team Penske. Penske driver Ryan Blaney had the best 10-lap average at 132.596.