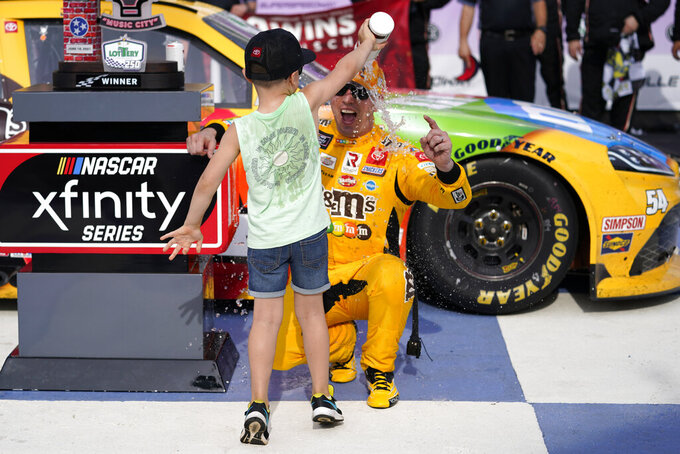 Kyle Busch has water poured on him by his son, Brexton, after winning a NASCAR Xfinity Series auto race at Nashville Superspeedway Saturday, June 19, 2021, in Lebanon, Tenn. (AP Photo/Mark Humphrey)

Busch won in the Xfinity Series in 2009 and the Truck Series in 2010 and 2011, but the track closed the year he won his last race. The speedway re-opened this weekend and will host its first Cup race Sunday.

Busch led seven times for 123 laps and beat Justin Allgaier in overtime for his third victory in three Xfinity races this season. His 100th win in his 360th career start is a nearly 28% winning percentage.

“I remember growing up as a kid watching Mark Martin win every week and wondering, ‘Can anybody beat this guy?’ And that was 49 wins,” Busch said. “So I just can't fathom, right now myself, what 100 really means. It's certainly something I will look back on once all is said and done and I'm in a rocking chair somewhere.”

It might be all said and done after two more Xfinity Series races. Busch doesn't think Joe Gibbs Racing has sold any Xfinity races yet for him in 2022 and so this year could be his last running his allowed five events a season.

“Why? Did you hear the crowd? Nobody likes me,” Busch said. “I get beat up, whether it is the fans or (media), like ‘Why am I doing it? What am I doing it for? Why am I beating on the little guys?’ I love winning. If I can't win on the Cup side, hell, I may quit that and come back and run Xfinity full time.”

Busch and Allgaier had a spirited late battle and swapped the lead six times in the final 49 laps. As the crowd booed him after he collected the checkered flag, he thanked his “Rowdy Nation” supporters and mocked the haters.

Busch was vilified by fans in 2009 for smashing the winner's Gibson guitar trophy in victory lane and he playfully pretended he was going to do it again while celebrating NASCAR's re-opening. But after lifting the Gibson over his head, he instead pretended to play it like a rock star.

Reigning Xfinity Series champion retained a 90-point lead over Allmendinger in the standings despite crashing and finishing 32nd.

“Every time we get up to a 100-point points lead, we end up getting wrecked,” Cindric said. "It’s frustrating, but that’s racing. There’s nothing you can do.”