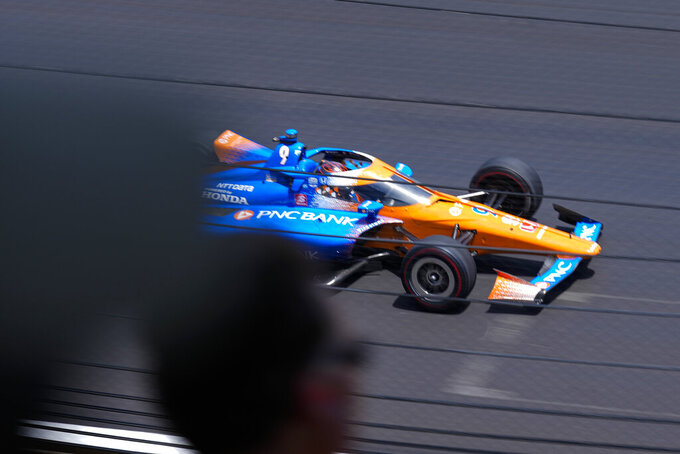 Scott Dixon, of New Zealand, heads down the main straightaway during the Indianapolis 500 auto race at Indianapolis Motor Speedway in Indianapolis, Sunday, May 29, 2022. (AP Photo/AJ Mast)

INDIANAPOLIS (AP) — Scott Dixon answered a few questions and started to trudge down pit road when he realized he forgot someone: His wife.

Dixon turned around, grabbed Emma's hand and took off on what had to be one of the most agonizing walks of his IndyCar career. Disappointment. Disgust. Discomfort. Dixon had to be feeling them all.

The 41-year-old New Zealander had the car to beat for much of the Indy 500 on Sunday until a late speeding penalty cost him a chance to kiss the bricks at Indianapolis Motor Speedway for the first time since 2008.

Dixon was trying to make what should have been his final pit stop with 23 laps remaining when he locked up the rear tires while braking. IndyCar flagged his speed and handed down a pass-through penalty that cost him valuable seconds and a significant number of spots.

He essentially had no chance down the stretch.

“It’s just heartbreaking, to be honest," Dixon said. "It must have been very close. ... I think it was like a mile an hour over or something. It’s just frustrating. The car was really good all day. We had really good speed. The team did an amazing job on strategy. I just messed up.”

He owned it, too.

Dixon climbed out his No. 9 Honda, apologized to each crew member he could track down and even went next door to do the same to everyone working in Chip Ganassi Racing teammate Alex Palou's box.

It was a bittersweet ending for sure.

Dixon was 21st, his fourth-worst finish at IndyCar's signature event and is surely what he will remember despite breaking Al Unser Jr.'s record (644) for most laps led in Indy 500 history.

Dixon got plenty of sympathy and support as he walked the grid. Fans cheered his name. Crewmen from other teams offered condolences. Indianapolis native Ed Carpenter stopped Dixon and asked what happened.

Kanaan and Dixon shared a long embrace. Graham Rahal patted him on the back.

Emma Davies-Dixon asked both of them the same question: Why did IndyCar throw that red flag with five laps to go? It was just two years ago that race control was in a similar position — with Scott Dixon running second to Takuma Sato — when IndyCar let the race finish under caution.

“Because there's no consistency,” Rahal responded. “They do what they want.”

Kanaan had a different take, saying IndyCar made the right call for one reason.

“I believe we’re here for the fans,” Kanaan said. "We hear the fans. Yeah, a lot of people are going to have different opinions about it. ... They came here to see a race, green-flag and checkered-flag race. That was the right call.

“That's what people wanted to do. I’m in full support. ... If I was in the stands, I want to see a race finish under the green.”

Scott Dixon refused to weigh in on the different race-ending approaches.

“I don’t know. We were out of it then by then so it didn’t really matter for us," he said.

“Coulda, shoulda, woulda, right?” he said. "That’s why it’s so tough to win at this place.”

Dixon has experienced his share of angst at Indy. The six-time IndyCar champion who is widely considered the greatest driver of his generation finished twice in the 500 since his lone victory at the Brickyard 14 years ago. He started from the pole for the fourth time in the last eight years and led a race-high 95 laps, more than twice as many as Palou and 82 more than Ericsson.

“It definitely was superfast, had good speed all day,” he said. "I think if things went smoother, we would been in the fight at the end. But obviously not.”

Still, Dixon ended up in the winner's circle. Despite the heartache, his long walk with Emma took them to celebrate with Ericsson and his Ganassi teammates.

“You have to be realistic when you have multiple cars. You can have a good day and a bad day in the same day. ... The good news is that the good outweighs the bad.”