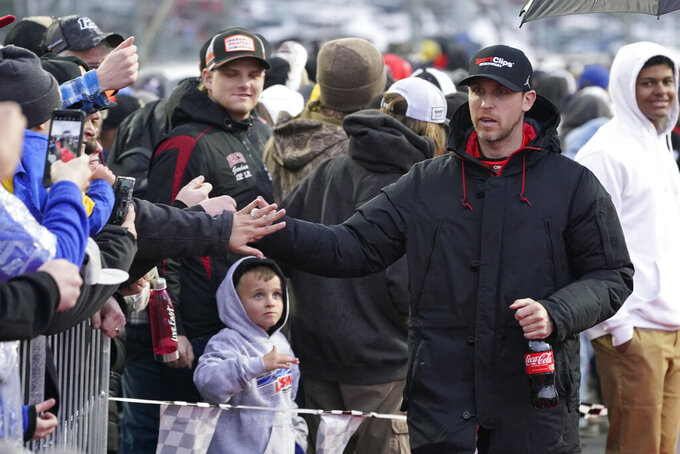 DOVER, Del. (AP) — Denny Hamlin said someone sent him a crass anti-Asian meme that poked fun at Kyle Larson's driving and out it went without a care — from his mobile phone to Twitter.

“I thought it was hilarious," Hamlin said. “Also, it's insensitive. I understand.”

He didn't laugh long. NASCAR and scores of fans and casual observers who lashed out at Hamlin for linking Larson's ancestry — he's half Japanese — with an offensive stereotype linked to Asian drivers certainly didn't find the meme funny.

Hamlin is headed to NASCAR-mandated sensitivity training after he posted the anti-Asian meme from the television comedy “Family Guy” to criticize Larson’s driving last weekend on the last lap at Talladega Superspeedway.

“I respect their decision. I understand where they are with it,” Hamlin said Saturday at Dover Motor Speedway.

Larson moved up the track multiple lanes in an aggressive move that caused a wreck at Talladega.

“I saw the correlation in the driving. That was it,” Hamlin said. “I didn’t even think twice about the other (part). That’s the insensitive part, right? Whoever created it, I guess, put his name in front of a woman who’s speaking Asian. I guess you’re making fun of that.”

Hamlin is a three-time Daytona 500 winner who drives a Toyota for Joe Gibbs Racing. He also owns 23XI Racing with Michael Jordan and fields two cars supported by the Japanese automaker — one driven by Bubba Wallace, the only Black driver at NASCAR’s top level.

In the meme, an Asian woman speaks in choppy English before moving across six lanes of traffic with no warning, reflecting a racist stereotype about Asian drivers. It has long been removed on all streaming platforms but the clip can still be found on YouTube. Larson’s name was superimposed over the female driver in the meme.

Hamlin’s tweet was up nearly seven hours before he deleted it.

“I definitely understand how some people could find it offensive,” Hamlin said. “If it’s one, then it’s one too many.”

Hamlin wanted to keep private his conversation with Larson.

“No hard feelings from me,” Larson said. “I think after he put it out there, he realized how offensive it could be.”

Larson, of course, was suspended for most of the 2020 season for using a racial slur and lost his ride driving for Chip Ganassi, his sponsors and needed to complete a sensitivity training course for reinstatement. Larson returned to the sport driving for Hendrick Motorsports and won the 2021 Cup championship.

Larson is friends with Hamlin and said of the meme, “I personally wasn’t offended by it.”

“I think NASCAR did what they had to do and I appreciate Denny going through the steps to learn from that,” he said. “Obviously, it was just poor judgment on his part. I think being in the position that we’re in, you have to be very careful with what you put out into the public. I know he’ll learn a lot from it here the next couple of weeks. I think we’re all ready to move past it and get back focused on racing.”

Larson said Hamlin has learned that “there’s millions of other people, that a tweet like that could offend.”

NASCAR’s rulebook has a section that says its members “shall not make or cause to be made a public statement and/or communication that criticizes, ridicules, or otherwise disparages another person based upon that person’s race, color, creed, national origin, gender, sexual orientation, marital status, religion, age, or handicapping condition.”

“I understand it all. I didn’t think this fell into that category,” Hamlin said. "Certainly, I understand their decision.”

Hamlin volunteered to attend proactive diversity training when he launched 22XI Racing for a deeper understanding and sensitivity toward racial and complex cultural issues.

“I went with the best in the country,” he said.

Kyle Busch wore a black T-shirt with “clickbait” printed on the front.

The two-time Cup champion sparked NASCAR headlines -- and clicks -- when he griped last week about his unsatisfactory contract talks with Joe Gibbs Racing and his cloudy future in the series.

Busch gave a series of terse, cryptic answers about his 2023 plans, saying he wanted to know his plans “yesterday” and “If it happens, it happens. If it don’t, it don’t. Goodbye.”

Owning perhaps NASCAR’s most prickly personality, Busch was vague Saturday at Dover about conversations he had this week with JGR.

“There were some discussions and such,” he said. “Nothing to elaborate on. All good.”

Busch has been with JGR for 14 years and the team was rewarded with the 2015 and 2019 Cup championships. Busch leads all active drivers with 60 Cup wins, and he has 223 victories across NASCAR’s three national series.

“It frustrates me that short comments are sometimes taken out of context,” he said before Saturday’s practice. “I answered the question, you know -- questions. I didn’t elaborate. It takes elaboration to kind of tell the story. And you can tell the story as you want with less words.”

Busch has been sponsored by M&M’s since he joined Joe Gibbs Racing in 2008, but the company informed the team ahead of the season that it was leaving NASCAR at the end of this year. That started a sponsorship search at JGR that will be key in retaining Busch. Busch is tied with Richard Petty for a win in 18 consecutive seasons.

Will he make it 19? Busch loosened up when asked about his Hall of Fame qualifications. Drivers who have competed in NASCAR for at least 10 years and have been retired for two years are eligible for nomination to the Hall. Is Busch, who certainly has the credentials, Hall of Fame worthy?