Hamlin falls short one again at JGR for NASCAR championship 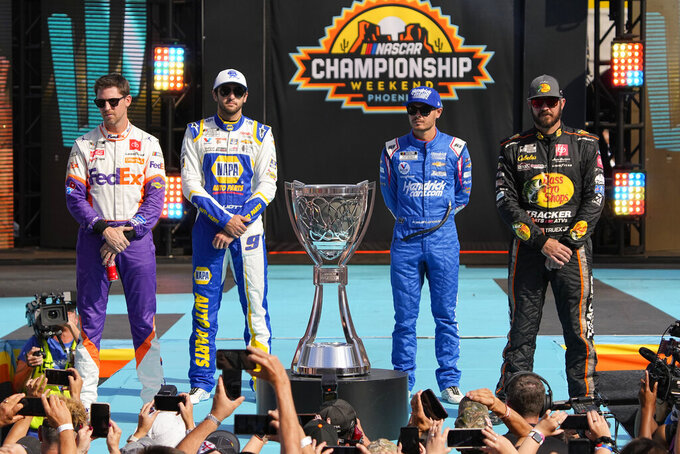 AVONDALE, Ariz. (AP) — Denny Hamlin’s eyes welled up as he stood on pit road, somber as he craned his neck to watch Kyle Larson’s championship celebration rage on the big screen.

Again, Hamlin was a championship race loser, one of the elite drivers of his era ending another season without the championship that remains the lone void on his resume.

Maybe he needed some chaos over the final laps.

With Hamlin turning 41 this month, his championship window at Joe Gibbs Racing is starting to get tight.

Hamlin finished fourth in the Cup championship standings for the third straight season and he was third in the first season of the winner-take-all format in 2014. He was runner-up to Jimmie Johnson in 2010.

“There was nothing else I felt like I could have done differently,” Hamlin said.

Hall of Famer Jeff Gordon shook Hamlin’s hand on pit road. Crew chief Chris Gabehart gave Hamlin had a long pep talk on pit road that did nothing to soften the blow of another lost championship shot.

“He was proud of my effort and he knew I gave it all I had,” Hamlin said. “That’s what we had. First half of the race, we were kind of mediocre compared to the field. But in the long run we just were really fast. Just didn’t have that short run speed.”

Hamlin has insisted that he didn’t need a championship to validate a career spent at JGR that included three Daytona 500s and 46 career wins. Still, his name sits alongside Mark Martin as the greatest NASCAR driver to never win a championship.

He admits it’s hard not to think about how to move past one more crushing defeat and regroup for Daytona.

“You think about it,” he said. “We don’t know what the Next-Gen car brings. We don’t know will our team be as good. Like there’s just many, many question marks that happens after this. That’s why we really put so much emphasis on let’s try to win this, win this year.”

He raced hard Sunday to make his fifth try for a championship the charm. He won two races and completed all but four laps all season (9,196 of 9,200). Hamlin boasted this week that he was “thriving under chaos” following a dust-up last week at Martinsville with Alex Bowman.

Hamlin balanced his gig with JGR was his new job as co-owner of the first-year 23X1 Racing team with his pal Michael Jordan. He failed to join the rarified air of NASCAR champion.

Hamlin was the only driver among the final four contenders who did not lead a lap Sunday.

“We knew that our percentage was low, and that was the case,” Hamlin said. “Many of these races come down to green-white checkers or shootouts at the end, and that just wasn’t our strength and hasn’t been ever.”

The race was a bummer to the end for Hamlin: 23X1 Racing driver Bubba Wallace finished last.

Truex, the 2017 Cup champion, gave Larson a push but failed to win that second championship. Truex’s four wins this season marked the fifth time since 2016 he’s reached that total, including in 2017 when he won a career-best eight times.

“Felt like all of us were really equally matched, honestly,” Truex said. “We were all really good, really fast. Whoever got out front seemed to be good on the short run, and then long run it was kind of back and forth between everybody all day it seemed like. So we did everything we needed to.”