F1 back to racing as questions mount over Red Bull spending 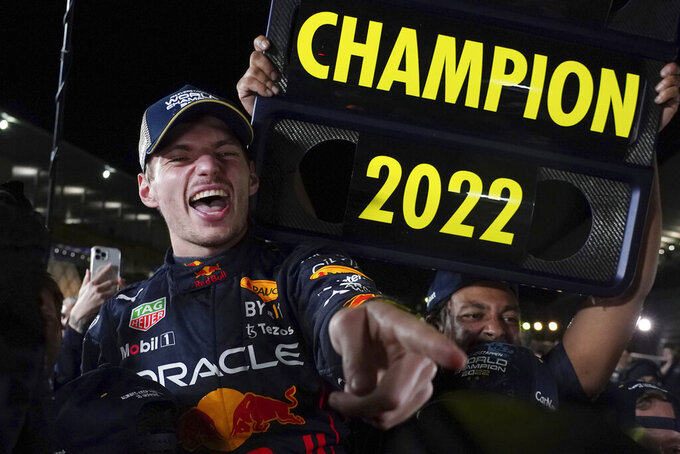 AUSTIN, Texas (AP) — Max Verstappen has already been crowned champion in one of the most dominant seasons in Formula 1 history. His Red Bull team is streaking toward the constructor's title as well.

And yet the big question looming over this week's United States Grand Prix is what to do about Red Bull's cost cap breach in 2021 and whether the team and its drivers should be punished?

While Verstappen struts as a two-time champion in a chase for a record-tying 13th win this season, rival teams and drivers say F1 must find a way to penalize Red Bull for breaking a critical rule that is supposed to reign in the big-spending teams and level the playing field from the front of the grid to the back.

Although the series governing body has called the spending breach “minor,” it could still be several million dollars. The FIA has not announced any sanctions or disclosed how much money Red Bull overspent.

What the FIA decides to do will be considered a major test of first-year president Mohammed Ben Sulayem's leadership. A spokesman did not immediately respond to a request for an update or whether the FIA will announce anything before the end of the season.

Ferrari, the series' biggest legacy team and Red Bull's closest rival this year for the championship, has called for “maximum penalties” for overspending. Ferrari has also argued that any improper boost in car development impacts not just one season but several, as teams are in a constant arms race for the future.

Potential penalties for minor overspending range from a reprimand to reduced budgets or even deduction of driver and team championship points. But few think FIA would do something as harsh as stripping Verstappen's 2021 title, or re-open this season's championship.

Alfa Romeo driver Valtteri Bottas, who was Lewis Hamilton's teammate last season at Mercedes when Verstappen won the championship over Hamilton on the last lap of the final race, said “harsh“ measures are called for.

"It has to be something that hurts,” Bottas told The Associated Press. “If you spend more money than other teams are allowed to spend, obviously you are gaining an advantage. It should be harsh.”

“It’s something between the team and the FIA,” Verstappen said. “I think it’s because we have been doing well. They are trying to slow us down any way possible.”

Red Bull so far has said little other than the team believed it had stayed within spending limits in 2021, and that it was “surprised and disappointed” with the FIA's findings of violations.

Formula One first announced a budget cap would be implemented in 2019, and it started last season with a limit of $145 million. It was scaled down to $140 million for 2022 and drops to $135 million for 2023, excluding driver salaries and engine costs. By calling the violation “minor,” the FIA indicated Red Bull’s overspending was under 5% of the total budget.

Even if the spending breach is considered minor, rival teams point to the razor-thin margin between Verstappen and Hamilton in last season's championship. Verstappen won 10 races, Hamilton eight.

“We all know how much one, two, three, four ... million can mean to car development,” Ferrari driver Carlos Sainz said. “I just hope if there is a penalty it is relatively important to take the appetite away.”

Fernando Alonso, a former two-time champion, shrugged at the controversy. The Alpine driver said there's a long history of championship teams pushing the boundaries of “gray areas” in the rules.

Those winners usually prompted copycats or rule changes, he said.

In a letter this week to the FIA president and copied to F1 president Stefano Domenicali, McLaren's Brown said any team found guilty of overspending should be penalized that amount and face an equal reduction the next season.

Violating teams should also be penalized in competition, such as losing wind tunnel time for car and engine development, Brown wrote.

“The bottom line,” Brown wrote, “is any team who has overspent has gained an unfair advantage both in the current and following year’s car development."

Haas team principal Guenther Steiner told the AP any penalties should carry well into the future, even for several years, if F1 expects to compel teams with a lot of money to stay within the rules.

“It needs to be not only financial (punishment), because just financial is too easy. You pay your way out of it. It needs to be competition-wise, you get deductions, something that needs to be more than money," Steiner told AP.

But, Steiner said, there's no point in taking a championship away from a driver.

“The celebrations have been done. Now to have a new champion? Who cares?” Steiner told AP. “The majority of the people already believe who they believe won.”

Hamilton said it's critical F1 maintain its integrity. But he didn't want to get drawn into a question of whether Verstappen should have last season's championship taken away.

“I'm looking at how I can win another championship," Hamilton said. “I have my own opinions of what we did as a team and how we did it last year and I'm really proud of that.”