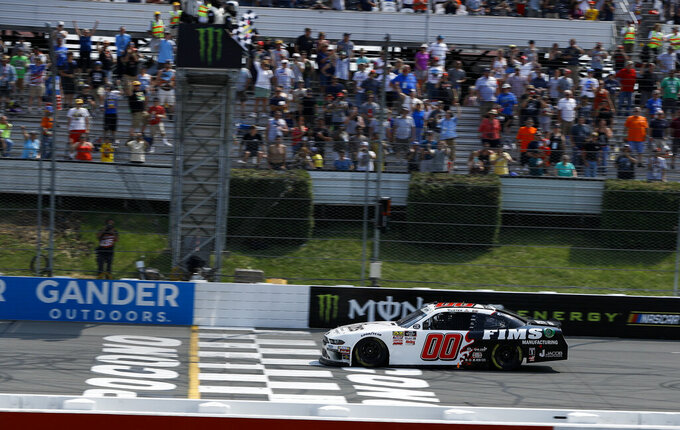 LONG POND, Pa. (AP) — Cole Custer slipped past Tyler Reddick in the final turn and held in to win the Xfinty Series race in overtime at Pocono Raceway.

Custer won his third race of the season in the No. 00 Ford for Stewart-Haas Racing. Reddick used a sweeping move on the inside and pulled away off the restart in the overtime and had the checkered flag in sight. Reddick drifted up the track headed into the frontstretch and Custer caught him and held on to nip him at the finish line for the thrilling victory.

"I was nervous once he got by me," Custer said. "I just had my downshift planned right and was able to get by him."

The 21-year-old Custer sprayed a can of beer that was placed on the roof of his car and added this checkered flag to his wins this season at Fontana and Richmond. He scored his fifth win in 83 career starts in NASCAR's second-tier series.

Reddick scored his 10th top-five finish of the season.

"We were just so good in the beginning of the race," he said. "I don't know what changed. The car went away from us there."

Custer opened the day with his ninth career pole and third of the season.

"It was a fun end of the race. I wish I didn't have to do it like that, but it probably made it exciting," Custer said.

Reddick didn't see it that way.

"I hope the fans enjoyed it, because I didn't," he said.

The race was forced into OT when Justin Allgaier spun off a restart with three laps left. Reddick leads the Xfinity standings by 76 points over Bell.