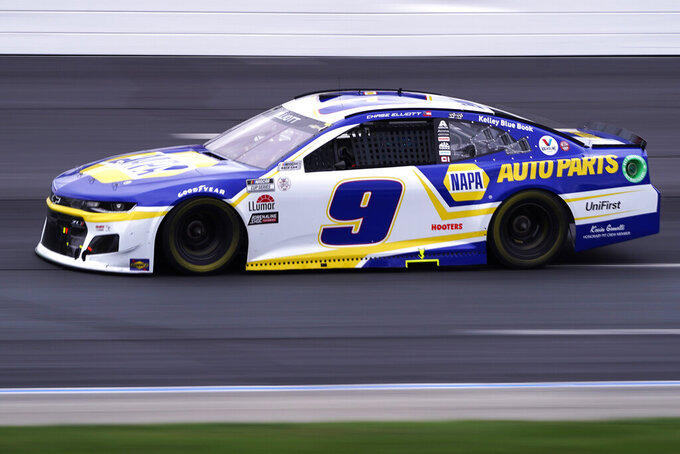 “I’m just excited to be going back. I’m looking forward to the challenge," Elliott, the reigning NASCAR Cup champion, said this week on a Zoom call. "Every time you go to the track, look, it’s always going to be tough. As I’ve said many times before, past success doesn’t equal future success and I don’t think that’s any different this weekend. I anticipate everybody else will be better than they were last time we were up there. And we just try to make sure we match it ourselves to have another shot.”

The NASCAR Cup Series resumes at Watkins Glen International on Sunday after a two-week break for the Tokyo Olympics, and Elliott will be chasing a little history.

He's won the past two races at the natural terrain road course in the Finger Lakes region of New York — last year's race was moved to the road course at Daytona International Speedway because of the pandemic and Elliott won that one, too — and another victory would put him in select company. Only Mark Martin (1993-95) and Jeff Gordon (1997-99) have won three in a row at The Glen since NASCAR began racing there annually in 1986.

Elliott will be making his 17th Cup road course start for Hendrick Motorsports. What he, crew chief Alan Gustafson and the rest of the team have accomplished with the No. 9 Chevrolet on the circuitous layouts is remarkable: seven wins across five different tracks, nine top-five finishes and 326 laps led. He's one victory shy of tying Tony Stewart for second all-time in road course wins and two behind Gordon.

And it all began at Watkins Glen in 2018, when he started third and led the final 33 laps to score his first career Cup victory after finishing second eight times.

“I think, for me, it’s a great honor to be even on the same page as Tony or Jeff,” said Elliott, who had to hold off Martin Truex Jr. in both his wins at The Glen. "Whether we can ever get there or not, to even be in the same sentence, or ... on the same page, I think is very cool. While I appreciate it and I think it’s a very cool achievement, it’s not at the forefront of my focus.”

Gordon figures his record will soon fall given that NASCAR has switched the schedule to include seven road courses instead of the customary two.

“I know this record’s going down. Chase has been dominant,” said Gordon, now second in command at Hendrick Motorsports. "I know what kind of equipment he has and I’ve seen how good he is on these types of tracks. Now you’re going to give him more opportunity, so it’s going down.”

With no track time, drivers have been relegated to simulators to knock off the rust.

Hamlin figures that gives the veterans an edge.

“Cup drivers are so good at being presented with a challenge and stepping up and being extremely good at it,” he said. “I expect some of the first laps of the race will be some of the fastest laps of the race because these guys are so tuned in. Although it will be different because it has been two years, for most drivers who have been doing it for 10-plus years, it will be a quick adjustment.”

Weather is a major factor that drives big attendance at WGI, and track president Michael Printup was holding out hope for a sellout on a tripleheader weekend with the Xfinity Series and the first Truck Series race since 2000. WGI announced five straight sellouts (over 90,000) before the coronavirus halted the streak. The forecast for Sunday is for cloudy skies with a 51% chance of scattered thundershowers and temperatures in the mid-80s.

“We got a late start, but we’re going to come real close if not make it," Printup said. "I’m glad that we’re up and running and racing. When you’re short in your sales cycle, you can’t expect miracles. We’re just happy that we’re open and running, back to normal.”

Elliott is a 9-5 choice to win, according to FanDuel Sportsbook. ... Hendrick Motorsports has won eight of the past 12 road course races and 10 of 24 stages, led 475 of 1,050 laps (45%), and posted three 1-2 finishes. Hendrick also holds the Cup record for all-time road-course victories with 23, 10 more than Joe Gibbs Racing.