Andretti effort to join F1 the most vocal of many inquiries 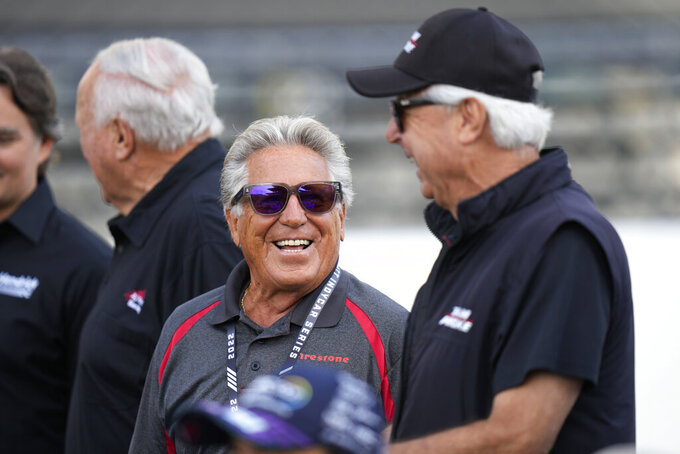 Mario Andretti, left, laughs with Rick Mears after practice for for an IndyCar auto race at the Indianapolis Motor Speedway in Indianapolis, Saturday, July 30, 2022. Former winners at the track were gathered for a photograph on the finsh line. (AP Photo/AJ Mast)

Formula One has multiple inquiries from potential team owners who have taken a more behind-the-scenes approach than Michael Andretti, who has been “quite vocal” in his desire to expand the current grid, F1's CEO said Wednesday.

Andretti has petitioned to expand the current F1 grid to 22 cars to accommodate Andretti Global, which he's billing as a true American team. Andretti has taken that route after attempts to purchase an existing F1 team fell apart late last year.

He said this week he’s building a 575,000 square-foot facility on roughly 90 acres in Fishers, Indiana, to house Andretti Global. But he’s still no closer to landing an F1 team and Domenicali offered very little update specific to Andretti.

“The status of Formula One, it is not a problem of quantity,” Domenicali said. “It's a matter of understanding not only the ones who have a bigger, louder voice, but there will be other people because Andretti was quite vocal about his request.

“But there are others that have done the same in a different way. So we will listen not only to Andretti, but to others that are respecting the silence on trying to be more productive on proving who they are and respecting the protocol.”

At issue is what value — if any — comes with expanding the current 20-car grid.

Mercedes head Toto Wolff has been vehemently against expansion and argued it will only decrease profits as the pot would be split between 11 teams instead of 10. But McLaren boss Zak Brown has argued adding the Andretti name would increase North American interest and signing U.S.-based sponsors based on Andretti's participation would compensate for any dilution to the purse.

Wolff has dismissed the notion the Andretti name brings any value to F1. Mario Andretti is the 1978 F1 world champion; Michael Andretti spent one unremarkable season driving in the series.

And even though Andretti has had discussions with Renault about entering F1, Wolff has only been supportive of a potential Audi-backed effort.

“Andretti is a great name, and I think they have done exceptional things in the US,” Wolff recently said. "But this is sport and this is business and we need to understand what is it that you can provide to the sport.”

The resistance has irritated Mario Andretti, who on Twitter responded to a question asking if Wolff is too powerful for F1 with: “This needed to be said; it’s about time.”

Domenicali on Wednesday said that Wolff has earned his respect in F1 and is a credible voice in the series. He also indicated all the back-and-forth on the Andretti issue is a moot point because the decision will be made by a governing body and not Wolff and the current team principals.

“Mario, I know him very, very well, and he is trying to present his idea in a way that he thought is the right way to do that,” Domenicali said. "But I do believe there is a governance in place and the decision has to follow the process and the protocol that is in place.

“Mario is very vocal, Michael is, too. We need to respect that we may have a difference of opinions, but at the end of the day it is a matter of following the protocol and there is someone that is to make the final decision.”