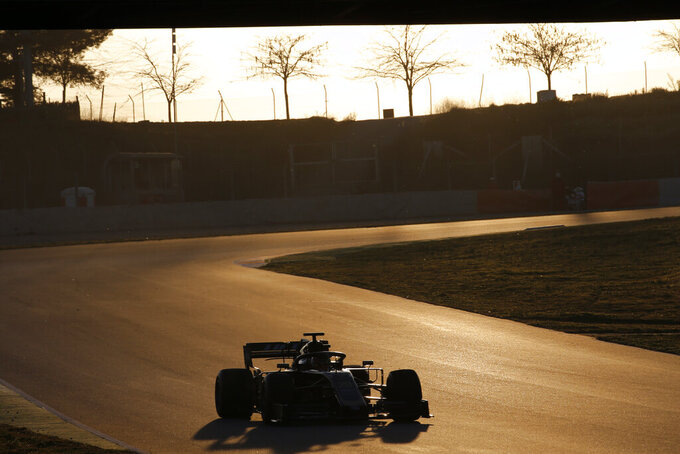 Haas driver Kevin Magnussen of Denmark steers his car during a Formula One pre-season testing session at the Catalunya racetrack in Montmelo, outside Barcelona, Spain, Tuesday, Feb. 26, 2019. (AP Photo/Joan Monfort) 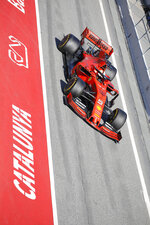 MONTMELO, Spain (AP) — With Fernando Alonso watching from the pits, British rookie driver Lando Norris set the fastest time in his McLaren on Tuesday to start the final week of preseason testing in Formula One.

Norris' good run came on a relatively slow day for Mercedes and Ferrari, as both teams faced reliability issues.

Norris is part of the new McLaren lineup that also includes Spaniard Carlos Sainz. They are replacing Stoffel Vandoorne and two-time world champion Alonso, who left F1 after four seasons with the English team.

It has been a promising start for McLaren in 2019, with the team producing its best preseason performance in several years. It was able to run more laps in last week's sessions than in both weeks a year ago.

It wasn't a trouble-free day for Norris, though, as he twice faced mechanical problems at the Barcelona-Catalunya Circuit.

"On the whole today was a good day, although we didn't get to do quite as much running as we wanted," Norris said. "We've improved the car slightly since last week, especially on the longer runs, so we're going in the right direction, which is positive. It's important that we keep doing that."

His time of 1 minute, 17.709 seconds, which came on the faster tire compound, was three tenths of a second slower than Nico Hulkenberg's lap with Renault last week, the fastest so far this season. Pierre Gasly was second fastest with Red Bull on Tuesday, ahead of Lance Stroll of Racing Point.

Sebastian Vettel was fourth with Ferrari, with teammate Charles Leclerc seventh after being kept in the garage for a long time as the team investigated a cooling problem with his car.

"This morning we did fewer laps than planned, but I'm sure we can make up for lost work in the coming days," said Leclerc, who is debuting with the team this season.

Valtteri Bottas was only 11th fastest with Mercedes on Tuesday, just ahead of teammate and defending world champion Lewis Hamilton. Bottas was stuck in the garage for most of the afternoon as the team had to change a power unit because of an oil pressure problem.

"Unfortunately, after four days of flawless reliability last week, I spent most of the day waiting," Bottas said. "But I'm glad I still got to do a few laps. The team did a really good job to get the car out again. It was important to get a bit of a feel for the new aero package. My running was obviously very limited, but it seems like we've made improvements."

Mercedes tested new aerodynamic parts to try to gain some speed compared to last week's sessions. There were relatively big regulation changes to the cars' front and rear wings compared to last season, and Ferrari appeared to arrive with a slightly more efficient design last week.

Williams, which started testing later than the other teams because a delay with its 2019 car, managed to run 119 laps with rookie George Russell.

Testing will continue through Friday at the Barcelona-Catalunya Circuit, home to the Spanish Grand Prix in May.