All eyes on skies as rain threatens Indianapolis 500 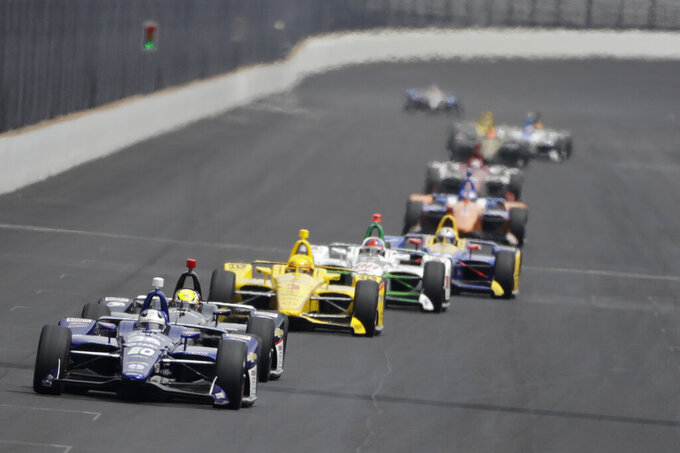 Ed Carpenter leads a group of cars into turn one during the final practice session for the Indianapolis 500 IndyCar auto race at Indianapolis Motor Speedway, Friday, May 24, 2019, in Indianapolis. (AP Photo/Darron Cummings)

INDIANAPOLIS (AP) — The day before the Indianapolis 500 dawned sunny, bright and otherwise perfect.

If only it were race day.

Angry skies and wind arrived Sunday morning, hours before the scheduled start of "The Greatest Spectacle in Racing." The threat of storms means a lot of uncomfortable waiting for IndyCar drivers and teams, track and series officials, broadcast partner NBC and about 250,000 eager race fans.

"I would just tell everyone to remember: This is Indiana," Indianapolis Motor Speedway President Doug Boles said Saturday, alluding to the state's unpredictable weather.

If storms do hit the speedway, two things could happen:

— SQUEEZE IT IN: The race becomes official after 101 laps, marking the midway point of the 500-mile race. That means a window of a couple of hours would allow someone to reach victory lane.

The last time the race was shortened was 2007, when Dario Franchitti completed 166 laps before rain moved over the track. It was the first of his three Indy 500 victories.

There have been six other rain-shortened raises, including the 2004 race called with Buddy Rice in the lead with 20 laps to go, and the 1976 race won by Johnny Rutherford. He took the lead on lap 80 and needed to lead only 22 laps before the race was called after 255 miles — the shortest in history.

Boles said the race could begin as late as 6 p.m., given the amount of daylight this time of year. And with new broadcast partner NBC pouring considerable resources into promoting the race, network officials will no doubt be willing to wait as long as possible.

— RUN MONDAY — OR TUESDAY, OR WEDNESDAY: Only three times in 102 previous races has it been pushed back from Sunday. The last time was 1997, when rain brought a Monday start. Fifteen laps were completed before it was delayed again. Arie Luyendyk finally won on Tuesday.

The other times were 1915 and 1986, when bad weather sent the race to the next weekend. Bobby Rahal, whose son Graham will start Sunday, finally won that year's race when it was run May 31.

The race also could finish on Monday if fewer than 100 laps are run Sunday. The race will simply pick up where it left off whenever the weather is clear, something that occurred in 1967 and 1973.

Regardless of what happens, officials are optimistic the track can be dried quicker than ever.

The speedway used a new sealant on the track after last year's Brickyard 400 that was primarily intended to strengthen the 14-year-old asphalt surface. But along with giving it a distinctive jet-black hue, it also helps water run off the track rather than soaking into it.

"Technically, the application penetrates the surface and closes off hairline gaps under the surface to help prolong the life of the asphalt," Boles explained during a test late last year.

Throw in the speedway's fleet of jet dryers to help speed the process, and the track can be ready to go in about 90 minutes. That is roughly half the time needed to dry the brickyard.

Boles was optimistic during a media event involving actors Christian Bale and Matt Damon, who are set to wave the green flag. He vowed Saturday afternoon, "If the day we have is like what we've seen the last few days, we will get the race in."