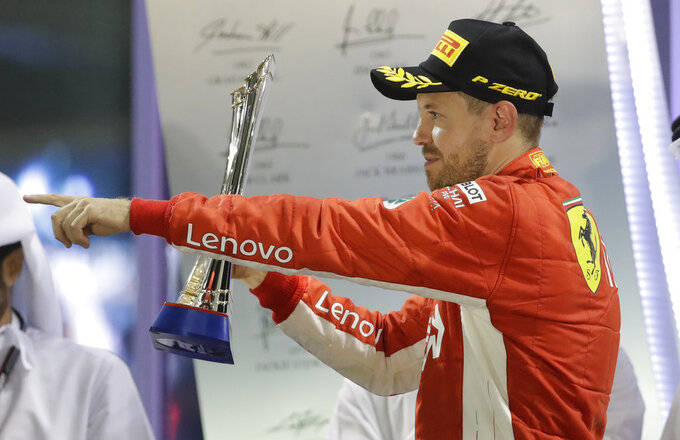 ABU DHABI, United Arab Emirates (AP) — World champion Lewis Hamilton coasted to victory from pole position at the year-ending Abu Dhabi Grand Prix on Sunday, and in doing so equaled his personal best for a season with his 11th win of the campaign.

Having already secured a fifth F1 title, the British Mercedes driver beat Ferrari's Sebastian Vettel at the Yas Marina circuit to secure the 73rd win of his career. He is contracted to Mercedes for the next two years at least, giving him a realistic chance of matching Michael Schumacher's F1 record of 91 GP wins. Vettel is third all-time with 52, and did not look like adding to that in a race controlled by his rival.

"I wanted to finish on a high. The team has done an exceptional job all year," said Hamilton, who stripped down to the waist on the podium and pointed to a tattoo on his back.

"I wanted to show 'Still I Rise' on my back," said Hamilton, referring to a poem by writer and civil rights activist Maya Angelou.

It was a symbolic finish to a season where, again, Hamilton showed his superiority under pressure to beat Vettel into second place overall for the second straight year.

Red Bull driver Max Verstappen finished third in the race ahead of teammate Daniel Ricciardo for a fifth straight podium.

Verstappen and Ricciardo made light work of overtaking Bottas, who finished fifth, raising questions again about the Finnish driver's ability to withstand pressure in a season where he has not won.

Veteran Spanish driver Fernando Alonso placed 11th with McLaren in his last F1 race with the team. The two-time F1 champion is pursuing other racing interests.

"It's been an honor and a privilege to race in the same era as him," Hamilton said. "The sport will miss him, we will miss him."

The race was held up after a spectacular crash on Lap 1 involving French driver Romain Grosjean and Nico Hulkenberg, who was sent tumbling into the barriers and finally settled upside down. Hulkenberg was unharmed and eventually climbed out.

Grosjean has a reputation as one of F1's more reckless — or adventurous — drivers. He caused the crash by clipping the right rear tire of Hulkenberg's Renault, sending it tipping upward, barreling over and sliding on its back. As some smoke billowed from the car, a fearful-sounding Hulkenberg urged his team to get him out fast.

A concerned Grosjean asked about Hulkenberg's condition on his radio. Stewards took no action against Grosjean, deeming it a racing incident.

"I was very sorry for him, but there was nowhere I could go," Grosjean said.

After a few moments, Hulkenberg's Renault was tipped over the right way and the German driver climbed out unassisted. His car was crane-lifted off the track. The incident held up the race for a few laps, with drivers forced to slow down behind a safety car, until the race resumed on Lap 5.

Verstappen and Esteban Ocon tangled on track once again, continuing their feud from Brazil two weeks ago where Verstappen fell from first place to second after being tagged by Ocon. This time they narrowly avoided touching cars as they fought for space.

Raikkonen's race ended on Lap 6 when his car had a power cut. The Finnish driver, who is joining Sauber next year, trudged back to the team garage.

With the halfway point in the 55-lap race approaching, there was a rare sight as rain briefly fell on the desert track. Ricciardo, by this point, was in the lead and about 5 seconds clear of Hamilton but had yet to change tires. He eventually did so with 21 laps to go, and Hamilton regained the lead ahead of Vettel and Bottas in third but Verstappen pressuring behind him.

Once again, Bottas failed to properly defend his position.

"Very happy to get past because it was quite crucial," Verstappen said. "I had to get past. I enjoyed that battle."

It was also farewell from Ricciardo to Red Bull after a difficult season where he has won two races — including the Monaco GP — but retired from eight largely because of engine problems. He is leaving to join Renault next year.

"He's such a big character, we will miss him and we wish him the very best for the future," Red Bull team principal Christian Horner said. "He had a really rough second half of the year, so it's been hugely frustrating for him and the team."