Wallace sends Jordan to top of scoring pylon at Daytona 500 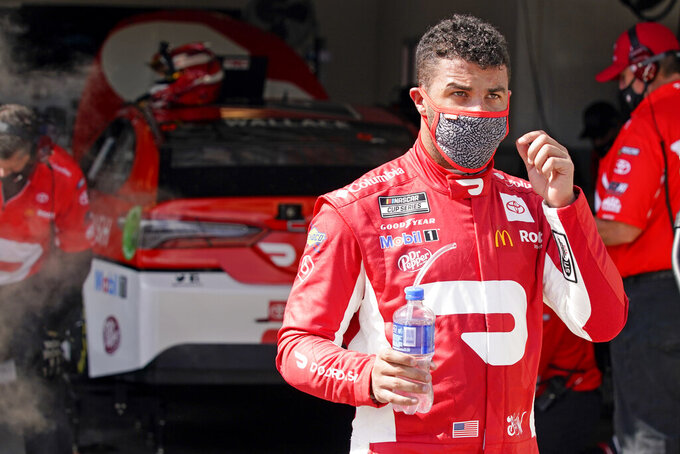 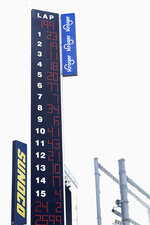 DAYTONA BEACH, Fla. (AP) — Bubba Wallace and Michael Jordan are feeling bullish about their debut in 23XI Racing headed into the Daytona 500.

Wallace sent Jordan to the top of scoring pylon in the first Daytona 500 practice session for their new team and the first overall for NASCAR in more than 300 days. Wallace then threatened Wednesday night to make a front-row start for Sunday's season opener but has to wait another night to find out where he'll qualify for "The Great American Race."

Wallace was selected as the driver in the first season of a new team that brought Jordan into NASCAR as a team owner. Wallace was fastest in the field in practice and surely impressed his new boss -— call that about 200 mph speed “Flying Jordan” — once they meet for the first time.

“He’ll be here Thursday, so I’ll get to have the first one-on-one conversation with him, just to pick his brain, to learn more about him,” Wallace said. “We all got to see a little bit of his taste and his character in ‘The Last Dance.’ Very competitive, I’m going to say that.”

With a getting-to-know-you weekend ahead, Jordan sent Wallace “a very positive” text after practice.

Hendrick Motorsports drivers Alex Bowman and William Byron start on the front row. NASCAR sets the rest of the field with a pair of qualifying races Thursday.

Wallace's qualifying speed was enough to zip him to the top of the chart and he stayed there until Byron bumped him out with 21 drivers remaining.

Jordan joined with NASCAR driver Denny Hamlin to form the new team with Wallace, a high-profile pairing of a Black majority team owner and the only Black driver at NASCAR’s top level. Jordan is the first Black principal owner of a full-time Cup team since Hall of Famer Wendell Scott in 1973.

Jordan, the six-time NBA champion with the Chicago Bulls and Hall of Famer, and Hamlin purchased a charter for their team from Germain Racing that guarantees Wallace a spot in the 40-car Cup Series field every week.

Hamlin, of course, is trying for his third straight Daytona 500 victory for Joe Gibbs Racing. He said he'll focus maybe a day each week on the 23XI team (No. 23 for Jordan, XI for Hamlin's No. 11 Toyota) and remain committed to JGR.

“I always have to maintain a level of professionalism to the team that I drive for,” Hamlin said. “This is the point of the season where things will start to get easier from my standpoint.”

NASCAR hit the track for practice for the first time in 341 days since a 55-minute session on March 6, 2020, at Phoenix Raceway. The pandemic forced NASCAR to streamline its schedule and most races were turned into one-day events. That continues in 2021 with only Daytona and seven other race weekends -- mostly new tracks and championship weekend -- having scheduled practice sessions.

Wallace had a tumultuous 2020 as he became NASCAR’s face for racial justice and change. He successfully pushed NASCAR to ban the Confederate flag at its events and with it came a wave of backlash from some fans. Wallace weathered it as best as he could — even when NASCAR brought in the FBI to investigate a garage door pull in his stall at Talladega that had been fashioned into a noose months earlier — and it ultimately led to a millions in new sponsorship dollars that gave Wallace the funding to help get 23XI Racing off the ground.

“I'm pumped and I know that all the resources are there. Everything is in place,” Wallace said. “My motto is, ‘no more excuses.’”

The 27-year-old Wallace is winless in 112 career Cup starts, all with Richard Petty Motorsports. His runner-up finish in the 2018 Daytona 500 was the best finish by a Black driver in the race.

“I had a little bit of trouble falling asleep last night, just from the nerves of climbing in,” Wallace said. “I know it’s just practice and qualifying today. But still. New beginnings here. New opportunities I’m excited to take on and see how we can make this team better.”