Vettel not feeling pressure despite 15 races without a win 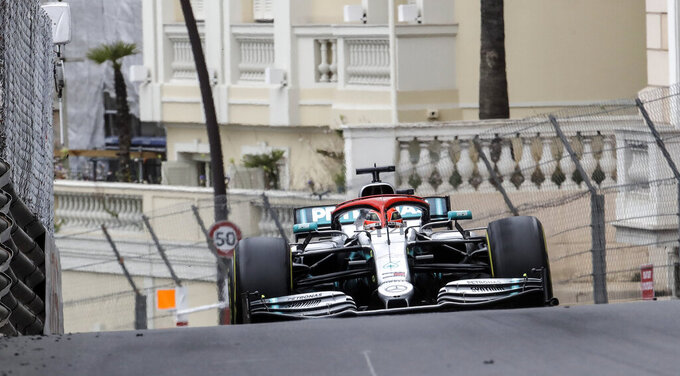 LE CASTELLET, France (AP) — Despite 15 Formula One races without a win, four-time world champion Sebastian Vettel says he is not burdened by his lack of form heading into this weekend's French Grand Prix.

The Ferrari driver, whose last of four world titles came in 2013, already trails championship leader Lewis Hamilton by 62 points. He has not won since the Belgian GP last August, with a best of two second-place finishes after seven races so far this season. Hamilton has won five of them, including the last three.

"I'm not frustrated. Do I look frustrated?" Vettel said during an occasionally terse media session at Ferrari's motorhome on Thursday. "It's not like we had 15 races to win and we didn't win, then I'd be frustrated."

He added: "It's not that we've dominated the last 15 races."

That doesn't say much for Ferrari's form, or his own.

Since his last win, Vettel has looked increasingly vulnerable when under pressure from Hamilton — as was the case in the two previous seasons won by Hamilton.

At the Bahrain GP in late March, he span his car with Hamilton behind him about 20 laps from the end. Then, two weeks ago, Vettel looked on course to win the Canadian GP only to finish in second place after being given a five-second time penalty for an incident — again with some 20 laps to go.

With Hamilton pressuring behind him, Vettel went off into the grass coming into a turn and then swerved back onto the track, forcing Hamilton to brake suddenly to avoid a crash.

Vettel was furious at a decision he considered grossly unfair, and the German let his feelings be known by swapping the No. 1 and No. 2 signs in front of the cars parked on the post-race grid to signify he was the moral winner, if not the actual one.

On Friday, Vettel will learn the conclusions of a further review from the Montreal race-day stewards into the incident.

"We will see what happens," Vettel said. "First of all it's to open the case and have another look. We'll bring some information that maybe the stewards didn't have at the time."

Even if Vettel were to get seven points extra for a win he thinks he should have had, it would make little impact on the considerable lead Hamilton has established in the F1 standings.

Hamilton is looking in strong form to win a sixth world title and leads Mercedes teammate Valtteri Bottas by 29 points, having trailed him early in the campaign. Bottas has won the other two races, giving defending constructors champion Mercedes a stunning seven out of seven.

Vettel, who won his world titles consecutively with Red Bull during its dominant era from 2010-13, is 33 points behind Bottas in third place.

"The next races will be very important because once you reach race 10, which is almost halftime (in the season), then there's only 10 or 11 races left," Vettel said. "At some point we need to start turning things around."

Vettel finished only fifth in last year's French GP, with Hamilton winning it.

Still, Vettel is optimistic the layout of the 5.84-kilometer (3.62-mile) track with several straights will confirm Ferrari's advantage over Mercedes in terms of straight-line speed. The Circuit Paul Ricard's design, with its varied cornering speeds, also offers drivers several opportunities for overtaking.

"We are very competitive down the straights ... Equally we have brought some updates (to the car)," Vettel said looking ahead to Friday's two practice sessions. "Some things on the list we would like to tick. Tomorrow will be a very important day for us to see if we can get the car trimmed in the right direction."

Hamilton was scheduled to address media at the Mercedes motorhome. But the team said he was excused duties because he was attending a memorial held on Thursday evening for fashion designer Karl Lagerfeld, the iconic Chanel couturier who died in February. It was being held at the Grand Palais in Paris.