Vettel may walk away from Ferrari having never won the title 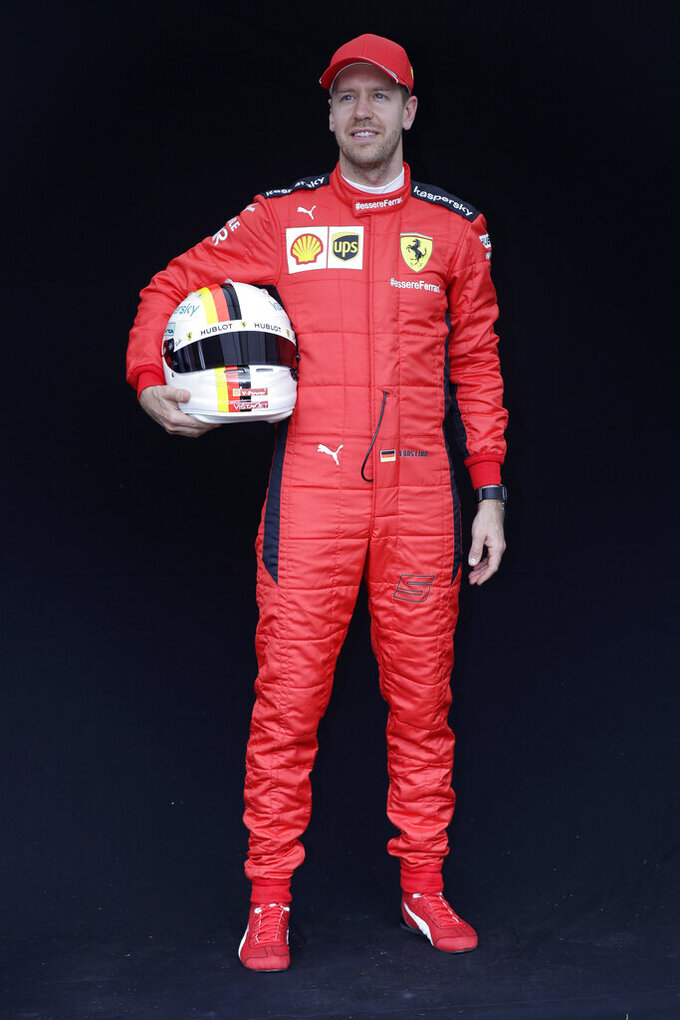 In this picture taken March 12, 2020 Ferrari driver Sebastian Vettel of Germany poses for a photo at the Australian Formula One Grand Prix in Melbourne. Four-time Formula One champion Sebastian Vettel will leave Ferrari at the end of the year, the Italian team said Tuesday, May 12, 2020. Ferrari said the decision was by mutual consent. (AP Photo/Rick Rycroft)

Sebastian Vettel may walk away from Ferrari having never delivered the Formula One title the proud Italian team so desperately wants.

The four-time world champion is leaving at the end of the year by mutual consent. But it remains uncertain if the season will start amid the coronavirus pandemic, with the first 10 races already postponed or canceled.

The 32-year-old German driver joined Ferrari in 2015 to replace Fernando Alonso, but was unable to add to his world titles at Red Bull from 2010-13.

Observers expected him to break Michael Schumacher's record of seven F1 titles. Now that is within reach of world champion Lewis Hamilton, who has six.

Hamilton's rise with Mercedes has been mirrored by Vettel's gradual slide at Ferrari.

Of Vettel’s 53 career wins, 14 came with Ferrari, including only one last year.

“In order to get the best possible results in this sport, it’s vital for all parties to work in perfect harmony,” Vettel said on Tuesday. “The team and I have realized that there is no longer a common desire to stay together."

Vettel's existing contract earns him $40 million per year, but he said finances played no part in the mutual decision.

"That’s not the way I think when it comes to making certain choices,” he said.

Vettel had ample chances to win Ferrari's first world title since Kimi Raikkonen in 2007. The team's last constructors' title was in 2006.

Vettel led the championship at the halfway stage in 2017 and 2018, but a series of clumsy mistakes — unbefitting a driver of his vast experience — proved costly.

At Singapore in 2017, he launched off pole position and tried to cut off Max Verstappen's Red Bull, causing a multi-car crash which Hamilton avoided to win the GP and reclaim the championship lead.

At the German GP in 2018, Vettel was set to win at Hockenheim. Holding a comfortable lead and with Hamilton some distance behind, Vettel misjudged a routine turn and crashed into the barriers, again gifting Hamilton a win and the championship momentum.

Last year, the pressure appeared to affect Vettel's judgement. Furious that he was stripped of victory at the Canadian GP because of a time penalty, he theatrically grabbed the big No. 1 sign and parked it in front of his car, while moving the No. 2 in front of Hamilton's Mercedes.

Then came a bemusing moment at the Italian GP in Monza.

Again under no pressure, Vettel spun his car — just as he had done in Bahrain earlier that season. He carelessly tried to come back on the track and almost speared into Lance Stroll, who was turning his Racing Point car into the same area and just managed to swerve past.

Vettel was also not helped by erratic and sometimes conflicting team orders, although by the same token his win last year at Singapore was because orders went in his favor over Charles Leclerc.

The speedy rise of Leclerc at Ferrari proved difficult to handle for Vettel last year. Despite being in his debut season with Ferrari, and only his second in F1, Leclerc won more races than Vettel and even beat Hamilton 7-5 for most pole positions.

It led to tension within Ferrari, which reached a breaking point in November when the drivers crashed into each other at the Brazilian GP.

Leclerc made a clean overtaking move on Vettel down the inside, and Vettel tried to reclaim his position by moving on the outside of Leclerc’s car. They touched wheels and both cars went out of the race.

Vettel finished a dismal fifth overall in the championship race, beaten by Leclerc and Verstappen, who finished third behind the Mercedes pair of Valtteri Bottas and Hamilton.

Leclerc tweeted a picture of himself and Vettel celebrating with the team.

“It’s been a huge honor for me to be your teammate. We’ve had some tense moments on tracks," Leclerc wrote . "Some very good ones and some others that didn’t end as we both wanted, but there was always respect.”

Leclerc, just as quick and 10 years younger than Vettel, was clearly seen as the Italian manufacturer’s future. He signed a new deal until the end of 2024 while Vettel’s was still on hold.

“Tt was not an easy decision to reach, given Sebastian’s worth as a driver and as a person,” Ferrari team principal Mattia Binotto said. “There was no specific reason that led to this decision, apart from the common and amicable belief that the time had come to go our separate ways.”

The 30-year-old Ricciardo had a dismal time with Renault, finishing in ninth. But the Australian driver proved his ability at Red Bull. He won seven races there and performed better than Vettel when they were paired together in 2014, beating him 3-0 in race wins.

Alonso returning to F1 with Ferrari would be an outside bet, considering the two-time F1 champion is 38. But he is still considered among the best F1 drivers in terms of pure ability. If Sainz. Jr does join Ferrari it would open the door for Alonso at McLaren.