Trump says Roger Penske to get Presidential Medal of Freedom 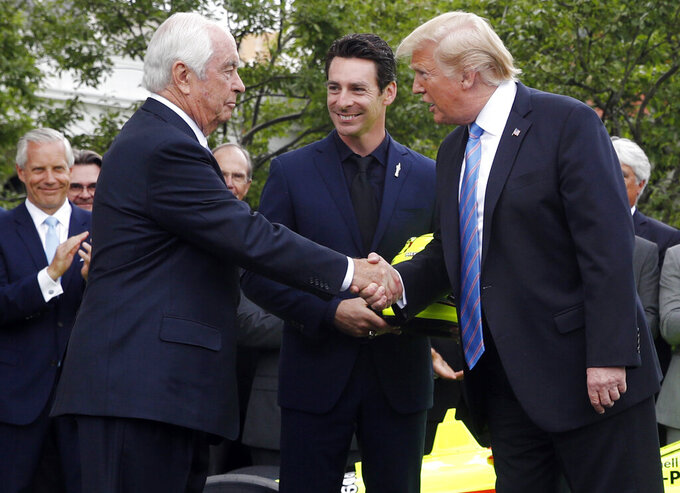 WASHINGTON (AP) — President Donald Trump says he's awarding a Presidential Medal of Freedom to Roger Penske, one of the most powerful men in American motorsports.

"He's very deserving. He's a great gentleman," Trump said as he made the announcement Thursday at the White House. "I've known him a long time, and a very brilliant guy."

Trump said he spoke with Penske on Thursday to inform him and that Penske is "very thrilled" to be receiving the nation's highest commendation for a civilian.

Penske celebrated his record 18th victory as a car owner at the Indianapolis 500 in May with driver Simon Pagenaud, a feat that earned Penske his second trip to the White House this year. Penske had visited in April as Trump celebrated Joey Logano's NASCAR championship. Penske, 82, is a fixture in the Detroit automotive scene and is one of America's most successful businessmen.

Trump made the announcement the day after he presented the medal to economist Arthur Laffer, whose disputed theories on tax cuts have guided Republican policy since the 1980s. Trump has previously awarded the medal to sports figures, honoring golf champion Tiger Woods last month and posthumously citing baseball legend Babe Ruth last year.

Penske called it "an honor" to be recognized.

"I am humbled by the president's acknowledgement of our achievements in business, in motorsports and in our community. Thank you to President Trump for this special recognition," Penske said in a statement.

Trump did not say when Penske's ceremony will be held.

When Pagenaud won the Indy 500 on May 26, Trump called Penske in the victory lane from Japan, where the president was in the midst of a four-day state visit. Trump also tweeted congratulations to Penske and said he had watched the race despite the early morning hour in Tokyo.