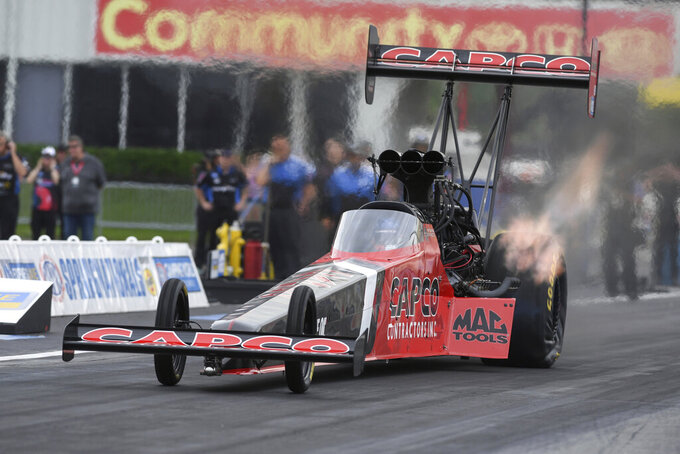 In this photo provided by the NHRA, Texas native Steve Torrence pedals his Top Fuel dragster to secure his first win at Houston Raceway Park in Baytown, Texas, Monday, May 24, 2021, when he defeated Doug Kalitta in the final round of the Mopar Express Lane NHRA SpringNationals. (Jerry Foss/NHRA via AP)

Torrence needed just a 4.00 to earn career win No. 43 after Kalitta’s Mobil 1/TRD dragster smoked the tires early. Torrence has lost just two rounds this season and has 14 round wins to extend his lead in the Camping World Top Fuel standings. It was his third win in the first five races of the season and first in Texas.

“I just think it’s unbelievable to have the success we’ve had this year and to win in Texas in front of our Capco crew and fans is even more special," Torrence said. “We’ve run well here in the past, but we get to the final round and something always seems to happen. We’ve been snake-bit. I don’t know if I’ve had win repellant on me or what.”

Robert Hight, who raced just twice in 2020 and was sidelined in February due to the COVID-19 pandemic, defeated Ron Capps in the Funny Car final. Capps also smoked the tires on the NAPA Dodge while Hight laid down a solid 3.916 in his Camaro. The win was Hight’s first since the 2019 fall Charlotte event and 52nd overall.

In Pro Stock, Matt Hartford won in Houston for the second time in his career, besting Deric Kramer in the final round for his fourth career victory. Hartford went 7.660 at 145.11 in his Camaro to win for the first time in 2021.

Rain washed out most of the final eliminations Sunday.