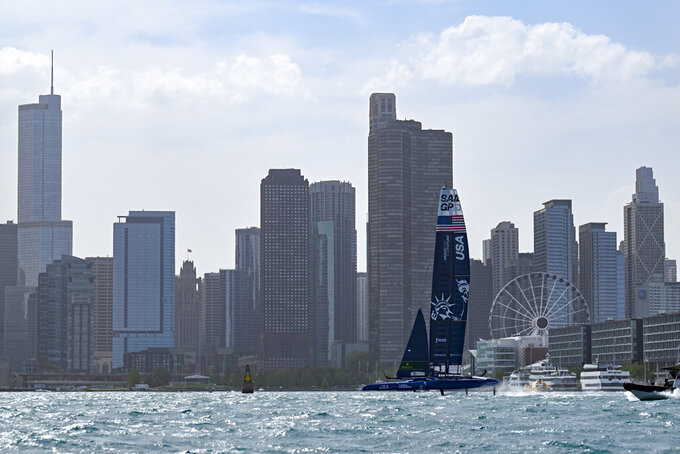 Sailing on Lake Michigan in front of home crowds on Chicago’s Navy Pier would provide the perfect backdrop for skipper Jimmy Spithill and Team USA to claim their first SailGP regatta victory.

The T-Mobile United States Sail Grand Prix will be SailGP’s Chicago debut as well as the first freshwater competition in the three seasons of the global league.

Spithill is in his second season in SailGP and while he’s reached some podium races, the Americans have never won a SailGP regatta. While Tom Slingsby and Team Australia have dominated the circuit since it started in 2019, Spithill and crew will definitely be the rooting favorites as the foiling 50-foot catamarans with wingsails zip above the waves at close to highway speeds.

“It’s awesome mate, just the amount of people coming down checking out the boats as they’re going in the water, out on the water. There’s a massive amount of support for the U.S. team,” Spithill said. “Chicago, it really is a big sports fan town, when you think about it, all those iconic teams. For sports fans, they’re really going to enjoy this. It’s not typical sailing. This is F1 on the water. It’s pretty much like auto racing and it’s fast, races are quick, and they’re right in front of Navy Pier. It’ll be a really good scene.”

Spithill, a two-time America’s Cup champion, is an Australian who lives full-time in San Diego with his American wife and their two sons.

Slingsby is once again the skipper to beat in the nine-boat fleet after a dominating win in the Season 3 opener in Bermuda last month. The Aussies have won the championship and $1 million prize each of the first two seasons.

Three fleet races Saturday and two more on Sunday will decide the top three boats for the podium race.

Spithill said racing the catamarans on freshwater is “definitely different in terms of how the foils react. You need a little more speed for the boat to take off and get on the foils. The cavitation comes on a little bit earlier. It’s quite interesting for the teams because there are definitely a few little differences. But for the fans it won’t look any different. It will be just as fast, just as close and it will be a lot like the other events.”

While the Windy City lives up to its nickname, the skippers say the breeze can be inconsistent from day to day, with it sometimes coming off the city front and the next day coming from offshore.

“For Chicago it’s really a prepare-for-anything type of venue,” said Slingsby, an Olympic gold medalist and an America’s Cup champion. “It’s not a very consistent venue for predicting what’s going to happen so we’re just trying to be ready for anything. We’re going to get a full variety of conditions here and hopefully there’s plenty of breeze so the boats are up and zipping around.“

“Ideally, we’d love to win it,” said Slingsby, who recently signed on with the New York Yacht Club’s American Magic for the 2024 America’s Cup. “We’ve been on a great winning streak lately but we know that winning streak’s going to come to an end eventually. We’ve just got to put it off as long as we can. If we have a good Top 3 finish here in Chicago, I think the whole team will be pretty happy.”