Sato rebounds from Pocono to roll into Portland on high 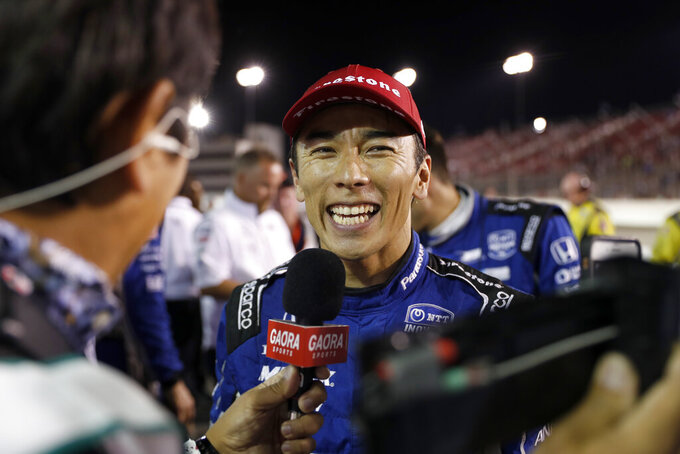 PORTLAND, Ore. (AP) — Just a few days after Takuma Sato was widely criticized as the aggressor in a spectacular opening-lap crash, Bobby Rahal took his driver to lunch.

Rahal happened to have business in Colorado, where Sato currently lives, and detoured to deliver a pep talk in the wake of a five-car accident at Pocono Raceway in which Sato was roundly blamed. No one was injured in the Aug. 18 crash — one driver was briefly evaluated at a hospital and Sato landed upside down in his car atop another — and Sato believed he was being unjustly made a scapegoat for an incident that altered the IndyCar championship race.

The heat was on the former Indianapolis 500 winner, and as the only Japanese driver racing in a major American series, the attention was suffocating.

Rahal told him to move forward.

"He said, 'Just don't worry, we know what we are doing. Just keep your head down and do your job,'" Sato said.

Sato had the full support of Rahal Letterman Lanigan, which took the unusual step of issuing a statement arguing that Sato should not be blamed for triggering the accident. RLL said it had reviewed the data and Sato's on-board camera, and found the driver was being wrongly blamed. The team acknowledged the accident altered the championship battle, but dismissed that as an unintended consequence of racing — just like a similar situation at Pocono in 2015 when a crash knocked RLL out of the title fight.

Sato believes the data exonerated him, and with the support of Rahal and the RLL organization, he headed to the next race.

"The blaming or bashing of one person, and that person being me, the team was not going to stand for that," Sato said. "I didn't ask for anything for the team, the team decided they needed to do the statement to show the world what really happened. After that, we just focused on the next race."

In the biggest swing of his career, Sato literally went from zero to hero by winning last Saturday night on the Gateway oval outside St. Louis. A lucky caution put him in position for the victory, but it didn't matter to Sato, who felt he'd publicly cast aside his role as villain for the Pocono crash.

Sato had to hold off Ed Carpenter at the finish line to win for a career-best second time this season, and fifth time in his IndyCar career. His statistics this year are the best they've been since Sato washed out of Formula One in 2008 after 90 races and one podium appearance.

IndyCar has also been difficult but Sato has shined this year for RLL. His four podiums, two poles and rank of sixth in the standings are all career highs. He also now has victories on a road course, street course, superspeedway and Gateway completed the IndyCar repertoire with a victory on a short oval.

Next up is a return to the road course in Portland, Oregon, for the second consecutive year after an 11-year absence from the IndyCar schedule. The crowd turnout at the 218.337-mile road course last season was reminiscent of the healthy days of open wheel racing, and Sato drew a strong contingent of supporters waving the Japanese flag or his team colors.

Then he won IndyCar's triumphant return to the Pacific Northwest, which he counts as one of his favorite stops on the schedule. Sato said Portland and Long Beach, California, draw the largest contingent of Japanese fans, and he's pleased to be going into Sunday's race with momentum.

Sato is in a contract renewal year with Rahal, which might add a third car next season alongside Graham Rahal. Sato expects to be back with RLL, and believes the team isn't far from competing with Team Penske, Andretti Autosport and Chip Ganassi Racing for the championship. Graham Rahal is eighth in the standings this year.

"I'm very happy and very comfortable within the team," Sato said. "I think Graham, he's been a bit too much unlucky this season, however, we work really close together. The boys do a phenomenal job so I'm very, very happy and very happy to make a full commitment and do anything I can to help."