Sainz benefits from penalties to start from pole in Belgium 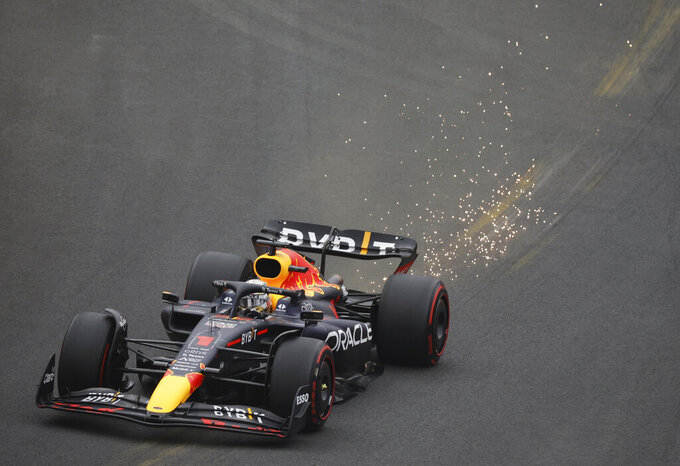 SPA-FRANCORCHAMPS, Belgium (AP) — Carlos Sainz Jr. will start from the pole Sunday at the Belgian Grand Prix because runaway Formula One points leader Max Verstappen was among the many drivers to be hit with grid penalties.

Sainz was actually second fastest to Verstappen in Saturday qualifying but the reigning world champion will drop to 15th ahead of the start. Verstappen otherwise would have won his fourth pole of the season and 17th of his career.

The Red Bull driver still liked his chances based on his qualifying speed.

“With a car like this it would be a shame not to be on the podium,” a confident Verstappen said.

Sainz was pleased with his starting position but his Ferrari was an unsettling .632-seconds slower than Verstappen in qualifying.

“I'm happy to be starting on pole; obviously not so happy to see the gap to Max this weekend,” said the Spaniard. “But to start from pole is a good start.”

Sainz, who took his first career pole this season at the British GP, didn't dismiss the possibility of Verstappen coming through the field and winning for the ninth time this season.

“A safety car can help him and if you translate the pace he has over 44 laps, he can come back,” Sainz said.

Sainz got a tow from his Ferrari teammate Charles Leclerc on his last attempt. Although Sainz lost a bit of pace misreading turns 5, 6, and 7, he said even a perfect lap would only have shaved a tenth off of Verstappen’s time.

“When you see the gap to Max it makes you wonder. It has been there all weekend, more than half a second ahead of us in every situation,” Sainz said. “I do believe in race trim we can be a bit more competitive."

And, Verstappen noted he won from 10th in Hungary.

“Survive Lap 1 and then I need to pass a few cars,” Verstappen said. “It’s a bit like Hungary, a bit further back but the basics are the same.”

Verstappen will start alongside Leclerc, who trails the Dutchman by 80 points as F1 resumes competition following its summer break. Leclerc was fourth fastest in qualifying but, like Verstappen, received a grid penalty for changing engine parts and will drop to 16th.

Seven drivers in total received grid penalties in Belgium ahead of the 14th race of the season. Also forced to drop to the back are: Lando Norris of McLaren, Esteban Ocon of Alpine, Zhou Guanyu of Alfa Romeo, Mick Schumacher of Haas and Valtteri Bottas of Alfa Romeo.

Bottas had earlier failed to advance out of the first group for the first time since Monaco in 2015, when he drove for Williams.

With all the penalties, Red Bull driver Sergio Perez (third-fastest in qualifying) will start second ahead of Fernando Alonso of Alpine. Mercedes drivers Lewis Hamilton and George Russell will start fourth and fifth once they move up the grid following the penalties.

Hamilton is aiming for a sixth straight podium finish and a first win of the year. But the seven-time F1 champion sounded dejected when told of his gap to Verstappen.

But Williams was upbeat as Alex Albon — driving with renewed confidence following a multi-year contract extension — advanced to the third round of qualifying for the first time this season. It means every driver on the F1 grid has now made it to the final round at least once this year.

The 7-kilometer (4.3-mile) circuit, nestled in the Ardennes forest, is the longest in F1 and among the best for overtaking — which could make it easier for Verstappen and the other fast cars to make it through traffic to the front.

“It should be a very exciting race for the fans,” Red Bull team principal Christian Horner said.