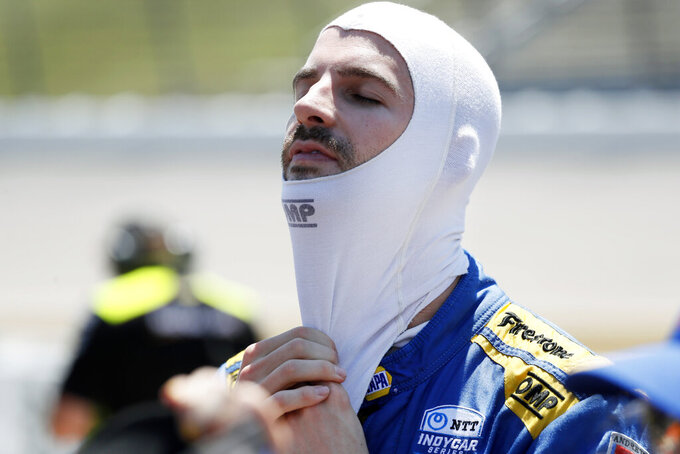 FILE - In this July 19, 2019, file photo, Alexander Rossi gets set for qualifying for an IndyCar Series auto race at Iowa Speedway in Newton, Iowa. Rossi took a huge hit in the championship race last weekend when he was wrecked on the first lap at Pocono Raceway. But he’s not giving up with three IndyCar races remaining, and plans to race for wins beginning Saturday night, Aug. 24 at Gateway to climb back into the title picture. (AP Photo/Charlie Neibergall, File)

CHARLOTTE, N.C. (AP) — Alexander Rossi learned from a headline that Takuma Sato's team had absolved its driver of blame for an opening-lap crash that harmed Rossi's championship chances.

He refused to click. Had no interest in their version of the incident.

"I get the gist, but my opinion remains the same," Rossi told The Associated Press on Thursday. He insists Sato was egregiously aggressive at the start of Sunday's race at Pocono Raceway.

The crash sent Felix Rosenqvist to the hospital with a sore back and headache after his car flew into the fence, and Sato's car landed upside down on Ryan Hunter-Reay's crashed car.

It also gave Josef Newgarden breathing room in the championship race: Rossi trailed him by just 16 points before he crashed in the second turn at Pocono, and the accident more than doubled the deficit. Rossi is now 35 points behind Newgarden heading into Saturday night's race at World Wide Technology Raceway at Gateway outside St. Louis, the start of the final three-race push to crown the IndyCar champion.

Rossi's opinion of Sato's role in his predicament is unchanged, though he has let go of the anger he felt in the initial hours after the accident. He figured Newgarden would go on to win the race and he'd finish last, but Will Power was the winner and Rossi's Andretti Autosport team showed tremendous resolve in getting him back on track to finish four positions higher than expected.

"Somehow it wasn't as bad as I thought it was going to be," Rossi said. "Yes, it was a negative. But right now we're in a position to where we kind of go for broke and take big risks, take bigger chances to try and get race wins."

That starts Saturday night on the final oval track of the season. Team Penske drivers are undefeated on ovals this year — Rossi was runner-up to Penske drivers Simon Pagenaud at the Indianapolis 500, then Newgarden at Texas — and they've won IndyCar's two visits to the track since it returned to the schedule. He was also runner-up last year at Gateway to Power.

Rossi believes it is imperative to win Saturday night because it's probably his best track out of the three remaining stops, and because he needs to close the gap on Newgarden in the win column. Newgarden has four victories this season to Rossi's two.

Before he began the four-hour drive from Indianapolis to St. Louis in a pouring rainstorm Thursday — "I think I'm qualified to handle the conditions," quipped Rossi — he sent a group text to his No. 27 team about the opportunity ahead. IndyCar closes its season with stops at the road courses in Portland and finally Laguna Seca, California.

He understands that he likely lost last year's championship at Portland, where Scott Dixon recovered from an early incident that should have allowed Rossi to tighten the title race. Instead, Dixon finished three spots ahead of Rossi and won his fifth title one race later.

"I'm stoked," Rossi said of the message he gave his crew. "I was like 'We have a pretty cool opportunity now and it's going to be a hell of a story.'

"We're not here to finish second. We're going to try it, and I don't think we have a whole lot to lose to be honest with you at this point. It's funny how championships evolve and how people shift with the natural ebb and flow of how it works. We're going to have a different methodology and approach than what we have had."