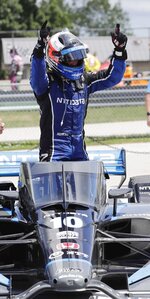 Felix Rosenqvist overtook Pato O’Ward on the next-to-last lap and earned his first career win Sunday in the second half of an IndyCar doubleheader at Road America. Rosenqvist became only the second driver to win an IndyCar event this year after Dixon posted three straight victories to start the season.

The race turned into a duel between Rosenqvist and O’Ward, who were both chasing their first career victories. O’Ward pulled ahead on the 43rd of 55 laps, but his margin steadily decreased before Rosenqvist finally passed him.

This weekend’s doubleheader marked the first time spectators were allowed during this pandemic-delayed season. IndyCar organizers are allowing fans on a case-by-case basis, relying on local and state health guidelines wherever the races are held.

Those fans got to see quite a finish.

Rosenqvist went to O’Ward’s left and passed him on Turn 7 of the 14-turn road course that is just over 4 miles long. Rosenqvist took over from there and won by 2.8699 seconds.

O’Ward, who had the pole position for the first time in his career, said he was struggling with his rear tires down the stretch. O’Ward also was affected by traffic involving lapped drivers, including Conor Daly. Those two drivers had made contact Saturday in a move that wrecked Daly’s Chevy and knocked him out of that race.

“We were just unlucky at the end," said the 21-year-old O'Ward, who had his first career podium finish. “We couldn't make it happen. But I'm proud of myself. I gave it absolutely everything I had."

Alexander Rossi, who won at Road America last year, finished third for the best result of what has been a disappointing season for the Andretti Autosport driver. Rossi ranked second in the point standings in 2018 and was third last year, but he hadn’t finished higher than 15th in any of the first three races this season.

“It's been a pretty nightmarish start I think, for this whole team," Rossi said. “But the work ethic never wavered and the confidence in what we were capable of never changed. It was just a matter of coming out and having a smooth day, and we were able to do it today."

Dixon started the year with victories at Texas and Indianapolis before winning Saturday at Road America.

But he was never much of a factor Sunday.

“I guess you can’t win them all, but we sure tried to with the start to the season we’ve had," Dixon said.

Will Power finished second to Dixon on Saturday and created some commotion at the start of Sunday's race.

On the opening lap, Power’s Chevy hit Ryan Hunter-Reay from behind and also made contact with Graham Rahal in a separate incident, knocking both Hunter-Reay and Rahal out of the race after they went off course. Power was penalized for avoidable contact and got sent to the back of the pack on the restart.

“It’s disappointing to see desperation moves like that, that early in the race," Rahal said. “I’ve made them before, so I know them well."

Rahal was knocked off course, and the left side of his Honda hit the end of a concrete railing. Rahal and Hunter-Reay both were checked and released from the infield care center.

Power’s tough day continued a few laps later when he hit a sign off Turn 13. He recovered and briefly took the lead on the 17th lap before eventually finishing 11th.

“Man, just a rough race for us today," Power said. “I guess in the end, things could have been worse, and an 11th-place finish is a small victory. I don’t really agree with the penalty from early in the race. I felt that was just a racing deal."