'Right now is strange' - NASCAR and IndyCar call off racing 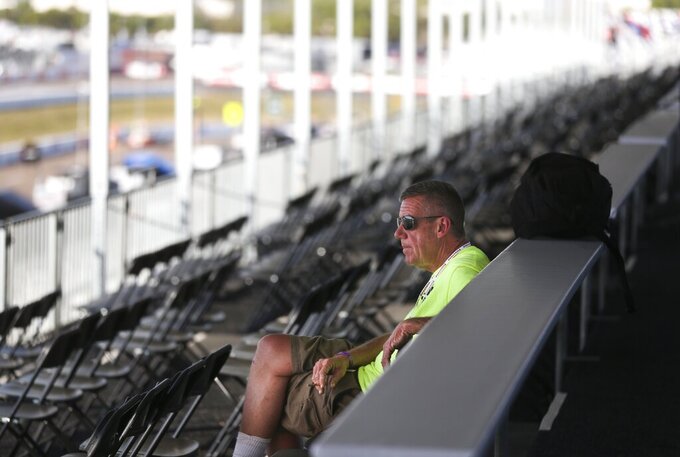 Jon Jenney, sits alone with no fans in the stand while working in the VIP area overlooking pit lane, at the IndyCar Grand Prix of St. Petersburg, Friday, March 13, 2020 in St. Petersburg. NASCAR and IndyCar have postponed their weekend schedules at Atlanta Motor Speedway and St. Petersburg, due to concerns over the COVID-19 pandemic. (Dirk Shadd/Tampa Bay Times via AP)

NASCAR and IndyCar reversed course Friday and pulled the plug on racing this weekend, with IndyCar also suspending its season through the end of April due to concerns over the COVID-19 pandemic.

Mark Miles, president and CEO of IndyCar parent company Penske Entertainment, said the about-face came as both IndyCar and NASCAR saw more and more events and attractions closing. He cited the cancellation mid-tournament of The Players Championship and the closure of theme parks as indicators public gatherings should not proceed.

“There's a public health risk any time people are getting together,” Miles said. "Really, there isn't a sporting event left that feels comfortable running even without fans. ... We just felt like it was the right thing to do to not allow the opportunity for the racers to go racing here.”

It takes six to eight weeks to build a street course, which shuts down large portions of the host city. It is unlikely that St. Petersburg can host the event later this year because of the permits required. Miles also said the Grand Prix of Long Beach, scheduled for April 19, was officially canceled for 2020.

It was unknown what will happen to races in Birmingham, Alabama, and at Circuit of the Americas in Texas, two of the four April races canceled Friday by IndyCar.

“From our perspective, our hope, our ambition, our plan is to restart in May and to get in as much of a season as we can,” Miles said.

If IndyCar resumes in May, the season would begin at Indianapolis Motor Speedway first with a race on the road course and then the showcase Indianapolis 500 on Memorial Day weeknd.

Officials at Indianapolis Motor Speedway, now owned by Roger Penske, said in a statement they were working with public health officials about racing in May. The Indy 500 draws crowds of more than 300,000.

“Currently, we don’t expect any disruptions to our month of May schedule, including the Indy 500,” the speedway said. "Our opening day is nearly 60 days away, which gives us time to continue gathering expert advice and evaluating the most up-to-date information available.”

“We want to race as much as you want us to race but this is the right decision,” Johnson wrote on Twitter. “This is so much bigger than sports right now and the health and safety of our fans, industry members and the overall public is top priority.”

IndyCar driver Alexander Rossi issued a statement in which he called the decision “a bummer.”

“I share in the disappointment with all the fans and pro athletes across the globe,” Rossi said. “But let’s work through this together, be good (intelligent) humans, and come back to have some fun in a couple months.”

Defending IndyCar series champion Josef Newgarden received word of the cancellation standing in the lobby of his hotel just a few feet from the entrance to the street course.

NASCAR said the decision to postpone the next two weeks “is in the best interest of the safety and well-being of our fans, competitors, officials and everyone associated with our sport.”

As NASCAR haulers pulled out of the Atlanta Motor Speedway, nearby campgrounds usually filled with fans making a weekend out of the race were still lined with recreational vehicles.

"Well, all the grocery stores are full of people panicking, and if I get home there ain't nothing to do but to be locked up at home, so I might as well sit out here," said Mike Crowe of Conyers, Georgia, about an hour's drive. "I've got a camper full of beer and food and satellite TV, so I can just camp and make the best of it."

Crowe, a retired fireman, offered lukewarm support of the decision to postpone the race.

"Well, I wish they would have held the event, I really do, but I guess I have to support them," he said. "They've probably got more information than I do about this stuff. I'm just disappointed."

Stacy Jones, who said he's had the same camping spot for almost 10 years, said he wasn't too disappointed since he had expected Sunday's race to be rained out.

"They told us our money will go toward next year's event," Jones said. “We come every year anyway. We just won't have to pay next year.”

As college and professional sports leagues canceled events or postponed their seasons one by one, NASCAR, IndyCar and F1 were among the very few organizations planning to press ahead this weekend. Finally, even the prospect of staging races without fans was deemed to be unsafe.

There was no announcement from either NASCAR or IndyCar on rescheduling races.